If you’ve ever watched a duck swim furiously upriver without appearing to move or a seagull fly directly into a gale without getting anywhere, you already have an idea about relative velocity. Relative to you, the duck or the gull doesn’t seem to be moving very much at all, but relative to the water or the air, they are moving pretty quickly.

But which viewpoint is the right one? Are they moving or stationary? Does it even matter?

But just because all viewpoints are valid, that doesn’t make them all equally useful.

Consider a duck in a river chasing a scrap of bread. From the perspective of someone on the bank, the duck has to make a tricky calculation to intercept the bread, which is moving downstream. But from the point of view of the duck carried by the same current, the bread is sitting still and the duck just needs to swim towards it.

If the duck is aiming for a point directly across the river on the bank, then it might be better off thinking in the bank’s reference frame. It needs to paddle diagonally upstream in order to follow a horizontal line in that frame.

On the widget above, you can toggle between the reference frames of the bank and the water. You can see for yourself that the distance the duck will have to paddle through the water is greater than the length of the actual path it follows in the frame of the bank.

To understand this, just think about how much paddling the duck would do to stay in one place according to someone on the bank. If the speed of the river is vriver​ and the duck is stationary for time T, then relative to the water, the duck has paddled a distance of vriver​T, despite not having moved relative to the bank. Motion directly across the river adds to this distance.

Things get more complicated if the river isn’t all flowing at the same speed. A real river usually flows faster in the center than near the bank. In this situation, a duck may be able to get to its target the fastest by getting itself into faster- or slower-moving water and taking a route that looks far from the shortest from above. Through the water, though, a faster route is a shorter one.

A small ferry boat takes hikers between two points on opposite banks of a swiftly flowing river. The current is the fastest in the center and gradually becomes slower near the edges. The decrease on either side is symmetric about the center of the river. 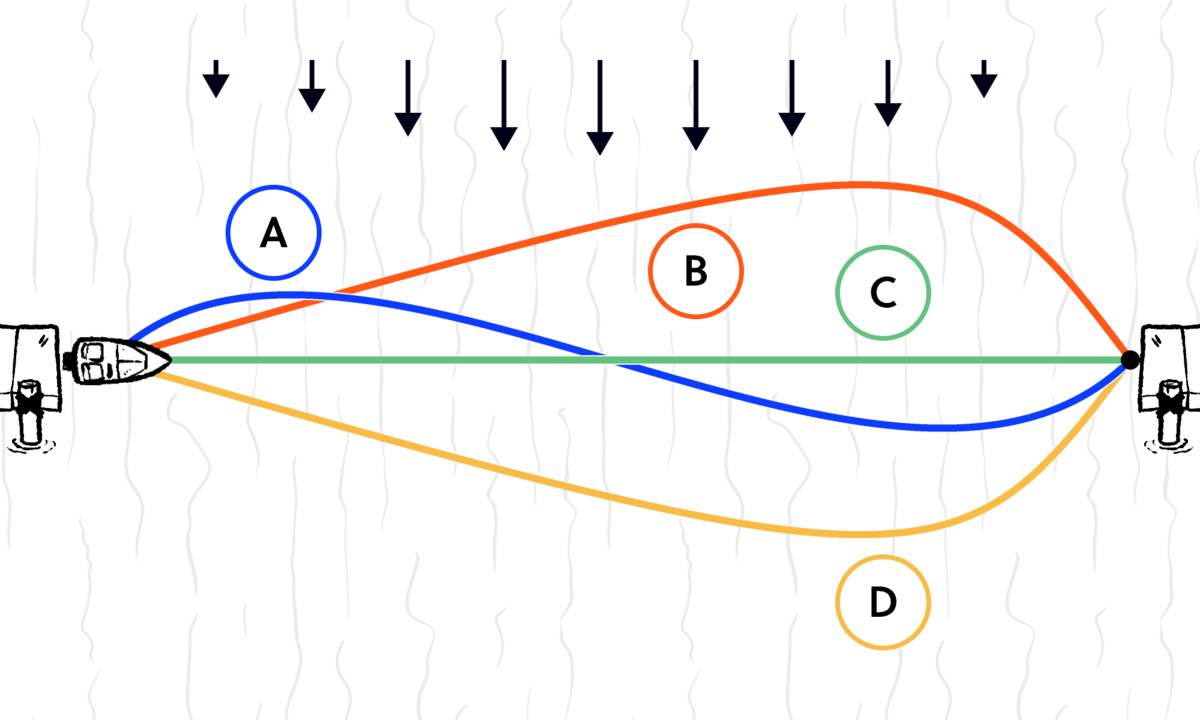 To minimize the time of the trip, the ferry driver tries a variety of different routes across the river. Along each route, the speed of the boat relative to the water is constant, but the angle that the boat makes with the current varies.

The ferry operator finds that, for the current today, one of the routes shown above is faster than all other routes.

Which of these routes gets the boat across the river in the least time?