On the Scottish island of Arran, a strange pair of tracks mark an otherwise nondescript rock. They measure 35 cm across, resembling tire tracks from a remote-controlled toy car.

Paleontologists believe the fossilized tracks belong to a giant, centipede-like creature called Arthropleura, which had 25 pairs of legs and tipped the scale at more than 200 kg!

Why don't we see giant bugs like Arthropleura today? One possible reason is that when they lived, the atmosphere was about 35% oxygen — significantly higher than today.

Like all animals, Arthropleura required oxygen throughout their bodies. But similar to modern arthropods (i.e. bugs), they didn’t have lungs or oxygen-carrying blood. Instead, they relied on branching tubes called tracheae that entered their exoskeletons in many places, allowing air to diffuse directly to their cells. 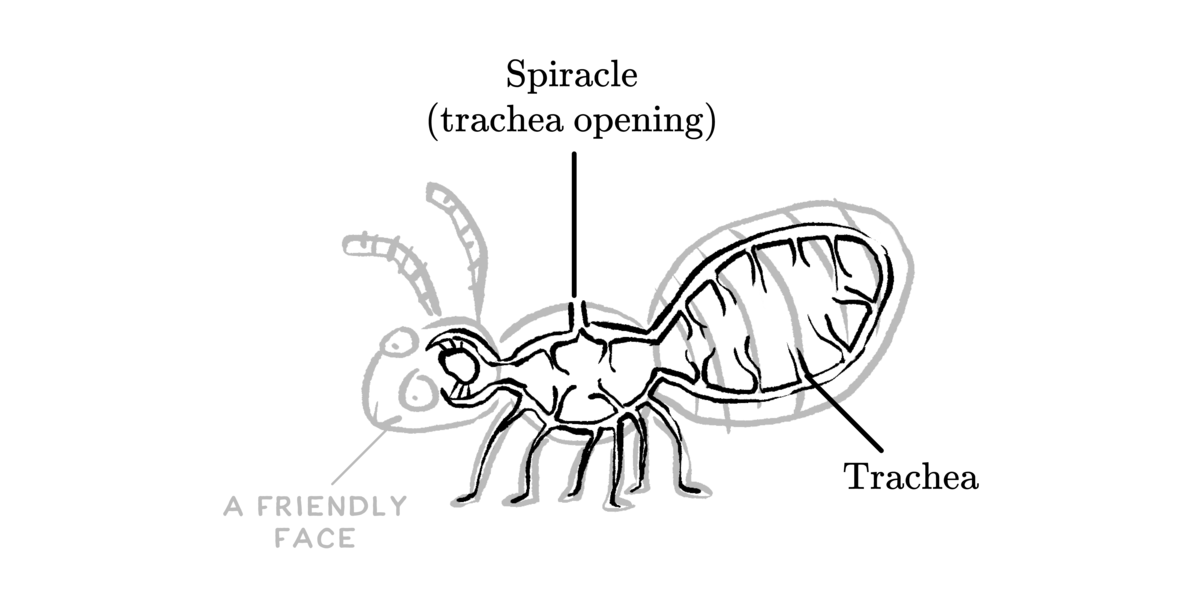 This means bugs, giant-sized or otherwise, have no control over their oxygen intake — their rate of respiration is controlled by the concentration of oxygen in the air. Perhaps we don't see giant bugs today because modern oxygen levels are too low to support them.

Let's use reasoning to explore whether this idea has legs... To predict how much oxygen a giant bug needs, we'll need to make some assumptions about how an animal's oxygen requirement scales with size.

Cells make up all living organisms, and large animals have proportionally more cells than smaller ones. This is why large animals need more oxygen. We might guess that all cells need oxygen at the same rate, regardless of the size of the organism. However, in practice, the cells in larger animals tend to use oxygen a little more slowly than those in small animals. If M is an organism's mass, then the oxygen requirement per unit time is Rreq​∝M43​. The symbol ∝ means "proportional to." 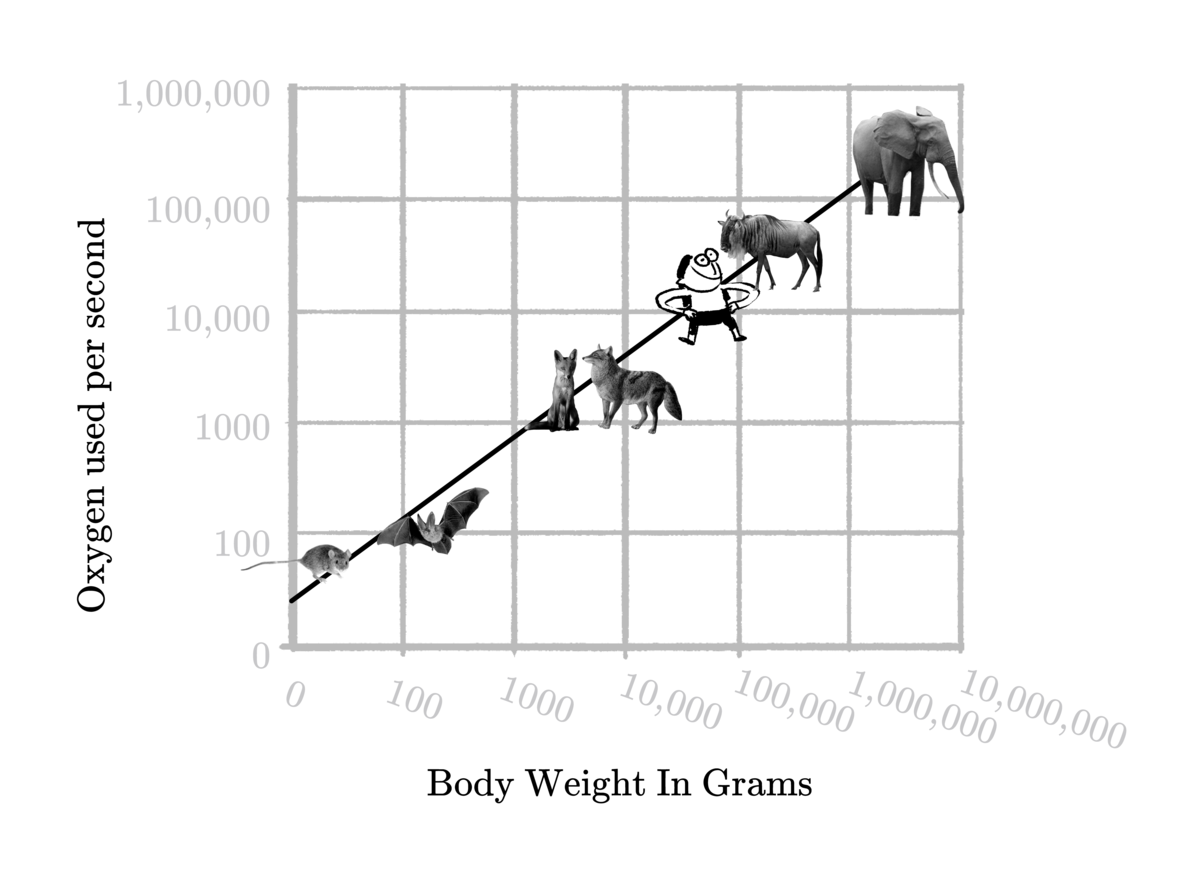 This is known as Kleiber's law. It predicts the oxygen requirement for species from the scale of bacteria to elephants and has been known for nearly a century.

Now, imagine making a bug bigger while keeping the same proportions. Its mass grows with its volume (roughly, the cube of its length, ℓ3), so Kleiber's law expressed in terms of an organism's length ℓ becomes Rreq​∝(ℓ3)43​=ℓ49​. However, as ℓ increases, the bug's surface area only grows with the square of its length, ℓ2. Since a bug absorbs oxygen through the tracheae on its surface, this mismatch suggests a larger bug may not absorb enough oxygen to support itself... unless there's more oxygen available in the atmosphere

Assuming Arthropleura uses as much oxygen as they can absorb, the rate of oxygen use Rreq​ must match the rate that oxygen passes through the tracheae Rabs​. The tracheae openings are on the surface of the bug, the area of which scales as ℓ2. Assuming the rate of oxygen absorption is proportional to the amount of atmospheric oxygen nOX2​​​, we find Rabs​∝ℓ2nOX2​​​. Today, the largest relative to Arthropleura is the Amazonian giant centipede, which is about 30 cm long, which we assume is the largest bug today's atmosphere can support. Can you estimate how large Arthropleura grew in the oxygen-rich atmosphere that existed more than 300 million years ago?

But in the Carboniferous period when the share of oxygen in the atmosphere was nearly 1.7 times as large as today's, there were much larger centipedes called Arthropleura.

Assuming the concentration of oxygen in the atmosphere is the primary factor that limits the size of these creatures, use Kleiber's law to estimate the length of Arthropleura.