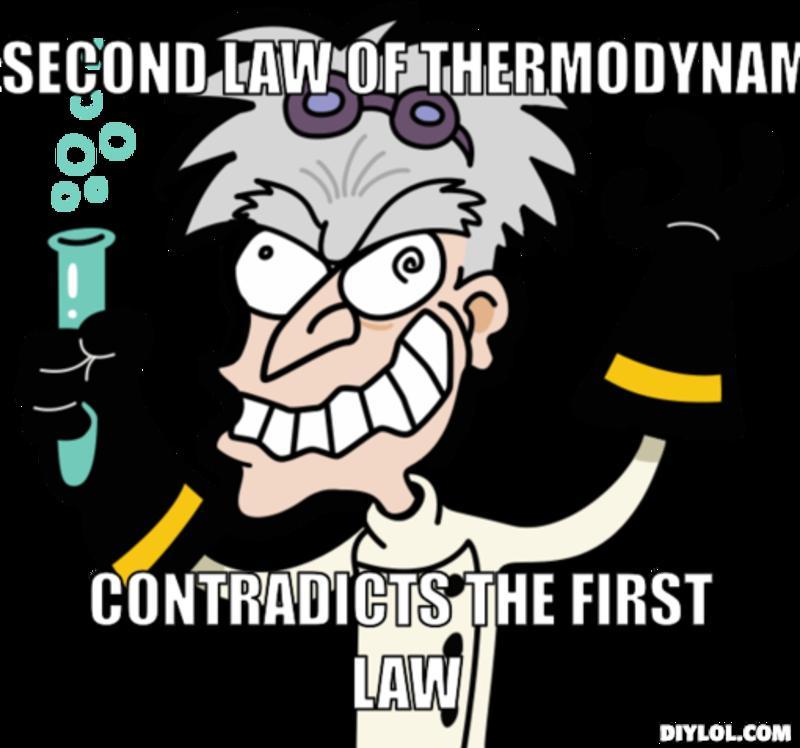 "The concept that efficiencies cannot be greater than 100% is due to an incomplete understanding of the properties of space. The second law of thermodynamics must be modified to account for the fact that space is not empty, as has been taught for the last 150 years. "

I call bogus. What do you think?

Well I am just a teen who study in class 12 and not a professor so speaking honestly i did not get much from the article . Any how the energy conservation cannot be violated in the entire univers which i know . An efficiency of more than 100 percent means violation of Conservation of energy.

My head hurts from trying to try to understand the material given in the link.

What's the "over-unity efficiency" of a nuclear chain reaction? We only speak of energy being extracted from nuclear forces in nuclei, it is meaningless to speak of "efficiencies of over 100%". If Tewari is promoting his device as having "250% efficiency", why stop there? Putting two of his devices in tandem will thereby have 625% efficiency, three will have 1562% efficiency, four will have 3906% efficiency, etc. Why does he stop at 250%? Because he knows that saying his device has 953674% efficiency sounds just too absurd, and investors won't listen to him.

The idea of thermodynamic efficiency comes from the days where early steam engines required a lot of fuel to get very little mechanical work done. It didn't take long for physicists to realize that the Carnot cycle delivers the greatest possible conversion from heat energy into mechanical work, but notice that it starts with a certain quantity of heat energy to be converted into useful mechanical work. In this context, Tewari, having "identified a new source of energy" (much like nuclear power), should explain how much of it can be converted into useful mechanical work. The fact that his new-found source of energy is inexhaustible is irrelevant to the matter of efficiency. Furthermore, neither Thermodynamics nor physics in general makes the claim that there cannot exist such sources of energy that we don't know about, that we could take advantage of. The sources of energy that we do know about today are not necessarily all there is or can be.

I think they're trying to imply that the device can harness energy from virtual particles or something. Either way, I think you got 'em. Personally, I realized they're not coming from legit science when the article quoted

“The universal matter is created out of prana since prana is aakaash in motion, and aakaash is the primordial superfluid substratum of the universe.”

My brain rolls inside my skull when I hear such pompous spiritual phrases, lol. Buuut... what do you think of the device? I don't get much from the article, to be honest. Is it a promise or just a lavish attempt at the market?

What's wrong with many of these "over-unity generator" inventions (Tewari's invention is hardly the first nor will be the last) is that the matter of extracting energy from a new source and the possibility that it is the generator itself that creates energy out of nothing are conflated. Even in reading Tewari's tedious papers on his invention throws no illumination at all on this distinction. He speaks of this universal matter out of parana, and then goes to claim that his generator is able to take the energy going into it and somehow amplify it. Is he using some source of energy in which to augment the initial incoming energy, or is he using some new source of energy, which is then somehow amplified just by the genius of his own design? Then, if the latter, why not simply use ordinary electricity from the grid and "amplify" it, without looking for more energy from strange new places like the prana?

In the immortal words of physicist Wolfgang Pauli, "This isn't even wrong!" Tewari's works offer no real means to either verify or falsify his claims.

They're basically implying they can harness more energy than they invest - essentially "creating energy." But that's not the case. See Mr. Mendrin's post.