Here is some code for generating random 3D curves based on physics. The code does the following:

1) Initialize a particle with mass, charge, position, and velocity in 3D space
2) Have a magnetic flux density B which randomly changes magnitude and direction once per second
3) Calculate the force on the particle and simulate the trajectory

Since the magnetic field does no work, the speed of the particle remains constant. Since the curve is 3D, each run of the simulation results in three curves (projections on the xy, yz, and xz planes). One such set of curves is shown below (click to enlarge). Each run produces a different curve, since the B field changes randomly. The program spits out spatial coordinates which can be plotted in Excel. 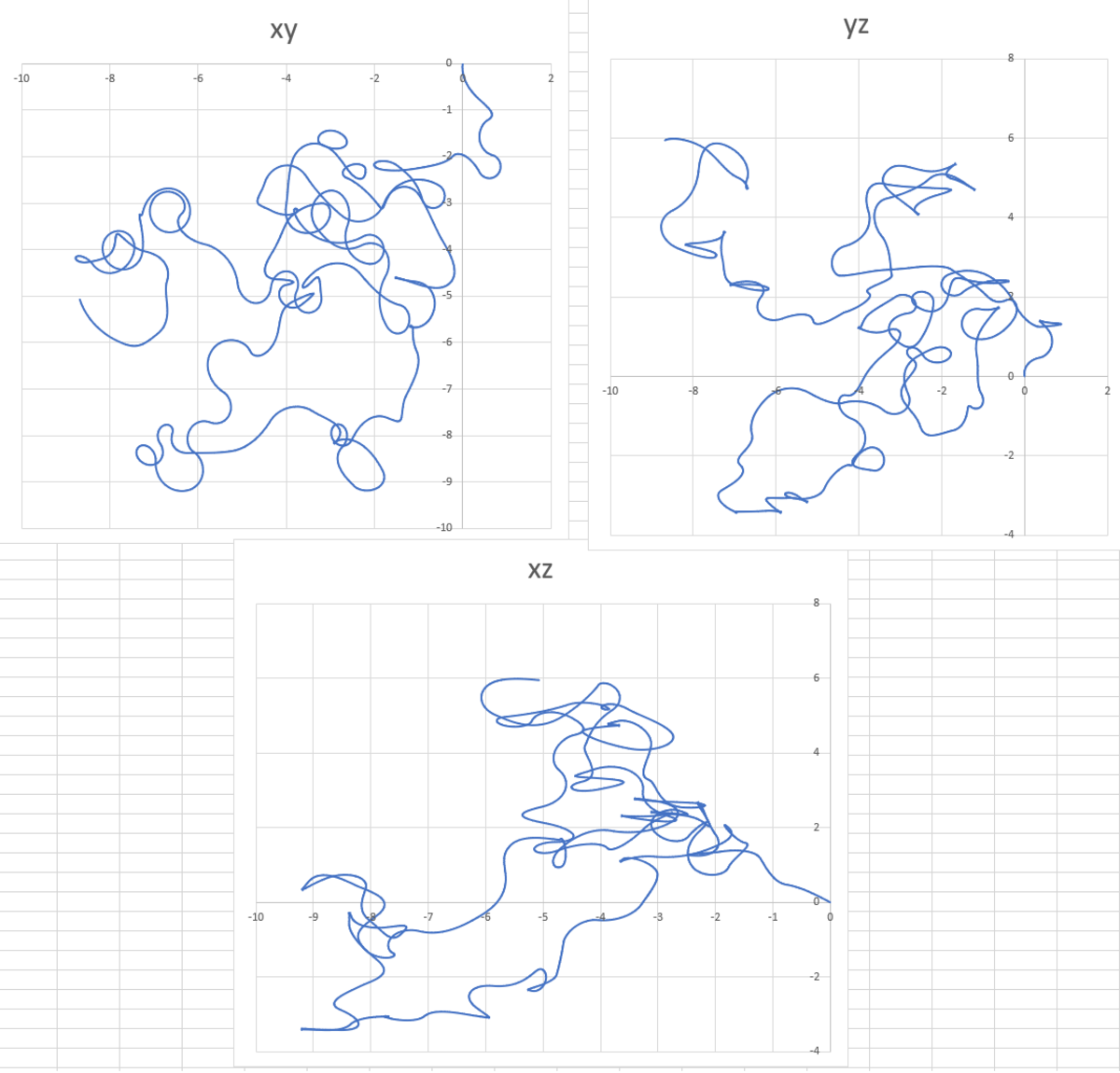 Note by Steven Chase
10 months ago

@Steven Chase yeah it seems me interesting.
Today are you posting any new problem. Please reply otherwise I have to keep checking.
If you are posting can you post a LRC circuit second order problem?

A Former Brilliant Member - 10 months ago

Hey bro, you should pursue physics or engineering when you get older. Use your talent! I'm probably going to be a theoretical physicist when I leave high school😁

Thanks. Each new curve has never been seen before, and will never be seen again

Nice note. I remember you sharing insights about generating random curves, a few months back.

@Karan Chatrath Sir please post the analytical solution of this Problem.
Thanks in advance

A Former Brilliant Member - 10 months ago

@Karan Chatrath – @Karan Chatrath I have some question
1) Which version of python you use?
2) Did you have taken the membership of MATLAB, I have seen it's very expensit. Can I get the pirated version from anywhere??

@A Former Brilliant Member – Engineering colleges and universities all over the world give students access to MATLAB and that is the way I use that software too. Obtaining a pirated version of the software is highly unethical and I will not endorse that.

Python, on the other hand, is freely available. I do not use it, but from my limited understanding, the version matters less, especially so if you want to perform simple numerical analyses.

@A Former Brilliant Member – I do not think it is possible for a school-going student to obtain the software.

@A Former Brilliant Member – It is because schools do not usually have a MATLAB licence. You may check with yours, but I think it is unlikely. You rightly said that an individual licence is very expensive so the only way to get it is when you start your Bachelor studies if that is what you plan to do. Engineering colleges and technical institutions do have licences which their students can access.

Yes, those were 2D curves. I realized that a changing magnetic field was the perfect thing to generate 3D random curves