This is the problem link. How about we discuss this problem here?

I will just put it here -

Two children play a game with three coins each having a radius of 1 unit. Each turn of the game consists of sliding one coin between the other two (without moving either of them). A given coin may not be moved in two consecutive turns. What is the smallest circular region in which it is possible for the game to be played indefinitely? For example, in the circular region shown below, coin 1 can be slid between coins 2 and 3, but then neither coin 2 nor coin 3 can then be slid between the other two. 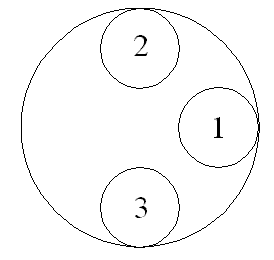 Interesting question. What are your thoughts?

If we have an infinitely large circle, can the game continue indefinitely? If yes, can we bound the table in any way?

Well, it's not said where a coin can end up after a move, and if not necessarily back in contact with the circular court, then what does it mean to be "slid between the other two coins"?

Let's assume that the moved coin has to be in contact with the circular court. Then since that coin cannot be immediately moved again, then either of other coins is going to move such a way to bring all three coins closer, and this will continue until no further move can be made, regardless of the size of the circular court.

Maybe we need to relax the rules or terms of the game, or motivation of the players?

Yes, exactly. My first was the same as yours. But maybe we are missing some point since it is an "established problem".

Let's say player A starts the game. Suppose initially coins 1,2,3(in that order) are placed on the circumference such that they just touch each other. Now, "sliding between the other two coins" does not necessarily means "sliding exactly in between bisecting the space."

We will assume that prime objective of the players is not to win but to let the game continue indefinitely.

So, player A will move coin 2 such that it may just touch coin 1. Then player B moves coin 1 to touch one of the other coins and so on.

I think that since we have freedom to move the coin to be slid anywhere, there is a possibility that this is indeed a very valid problem although I have thought much.

I see that I am confused myself.

The coin does not need to hit the edge of the court. It just need to pass (completely) through the line connecting the centers of the 2 circles.

You make a good observation here (but not yet phrased as a simple characteristic) for a condition under which the game must eventually end.

I'm gonna post a problem pretty soon based on this game.

Okay, I've posted a problem about this Two Children Play With Three Coins Please refrain from posting the solution here!

I've left out mention of this note because that "This" site could eventually post a solution in the future.

That is one good problem here! Couldn't even think of a good approach for this problem! Nice problem, Kartik!

I hope that there is no solution posted, and if this happens, then the challenge is spoiled. XD Good luck for those who want to try out the difficult problem!

@Kartik Sharma- the answer is 25pi/4 units because the distance bw 2 circles must be 5r for a coin to pass and if we take this as diameter is 5r so answer is equal to 25/4pi, now it is correct, bcuz I am just so good in maths, just try to Under

25pi units, I know I am right because I am always right, thnx

Please refrain from adding such comments on a problem solving discussion. If you think it is 25π, then add a solution not an answer.