A Sunday excursion in integral land

which calls for the treatment of partial fractions, but such is unnecessary.

There exists a very simple solution to this integral, by means of converting the numerator to ex via the relation

from which we can solve for the integral. But when I revisited this integral earlier today, I wanted to try something new.

Essentially, this could be done with ∫x(x−1)dx​ and the deliberate substitution x=eu+1, which basically yields the same answer as if you did the integral with partial fractions (which are very easily found), except you purposefully avoided using them for reasons unknown.

I wanted to take this one step further. I went ahead and tried doing this same with a generalised form of a rational function that takes the form of a fraction with a quadratic as the denominator and a constant for the numerator.

The numerator is set to be just 1, since I could just scale it with a constant at any time, and the quadratic is reduced to have its leading coefficient to be again just 1.

Referring to what I did for the integral that could have been done with partial fractions instead, I first factored the denominator, then tried the same trick, deliberately including the substitution of x=eu+c and dx=eudu. I saw that the eu would cancel, leaving me with an integral similar to that of the first integral on this page, which sparked my curiosity for this problem.

It will become apparent why the determinant Δ cannot also be zero in further steps.

Now that I have contorted the integral to this particular form, I can use the same technique of conjuring an ex to appear in the numerator. I do this by first scaling up the numerator to match the constant in the denominator, then applying a 1− to the integral, by which time the integral can be solved with relative ease. 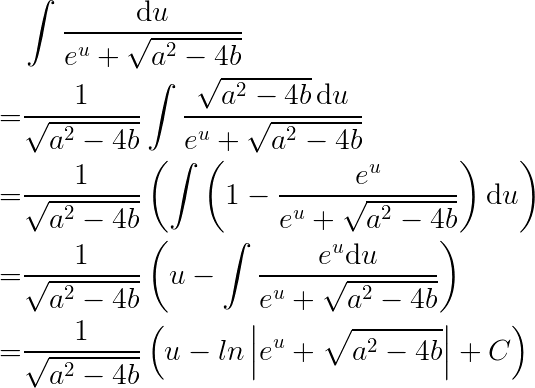 Finally, I proceed to convert back to x from u. 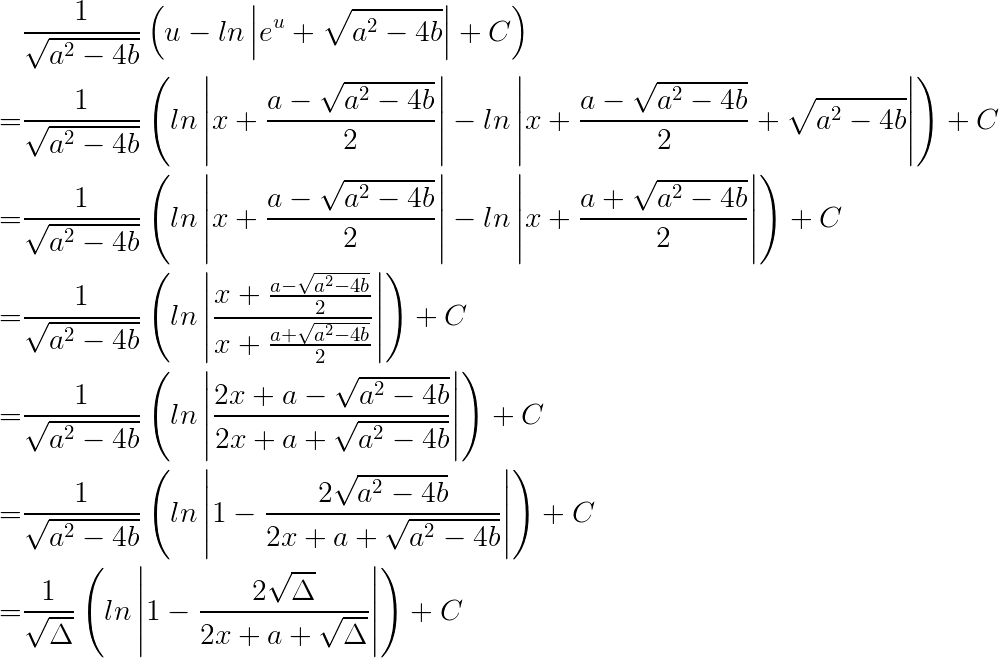 Since we cannot divide by zero, the determinant cannot be zero.

To my amazement, this relation is actually on Wikipedia - another case where the determinant is negative is covered by Wolfram Alpha, and is also listed on Wikipedia.

But why stop here? I wanted to try to apply the same technique to rational functions where a constant divides a cubic or a higher power.

However, my efforts were in vain. The technique was only able to reduce one root of the quadratic by cancelling an eu term, which does not apply to higher powers where more roots exist. Moreover, it is difficult to find the roots to start with.

I started playing with random integrals that I could come up with via strange substitutions, such as:

I then came across this problem after I got really really bored:

where it was a final problem in a list of supposedly challenging integrals. And it really was challenging. And my previous method of substitution did no good whatsoever. However, I did eventually come up with a hideous looking solution: 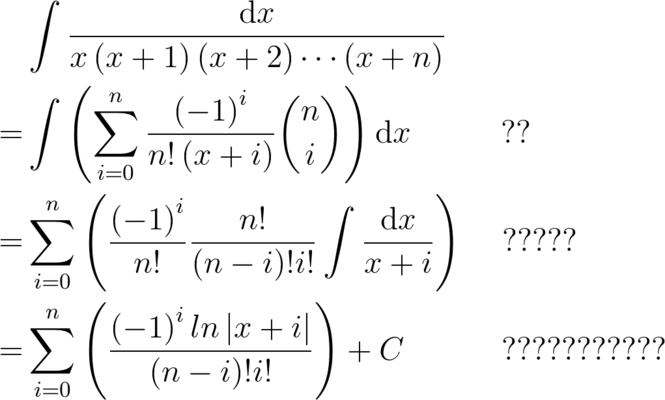 with the increasing number of question marks denoting my disbelief in the accuracy of my work and notation and in the complexity of the non-existent actual solution.

this is extendable to at least the cubic in the denominator for rational functions. I shall reveal an extended method when I have time.