I... am sorry for not posting anything in a while. I get lazy when I have to type something in code or just something long. Just in advance, I haven't done the nomenclature for cycloalkanes yet. I will do that... soon, after this.

And we have the butyl, hence a four carbon chain branches off. 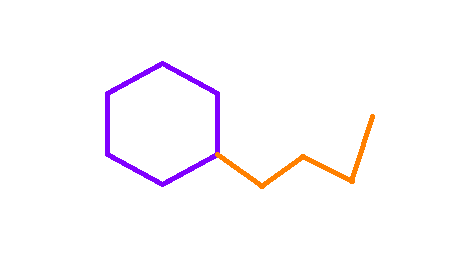 Now wait a moment. I could've done this just as easily. 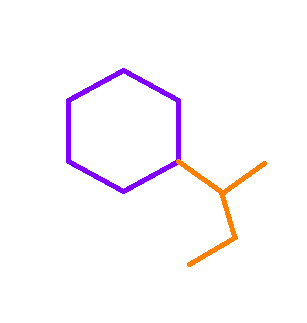 They're both fundamentally two different structures! We have two ways of differentiating (not calculus differentiation :P) these two molecules.

If I simply say butyl cyclo hexane ⇒ then it's this one. 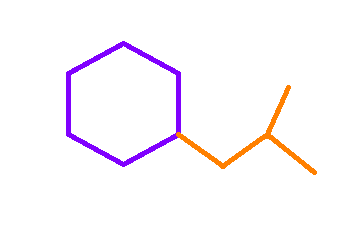 Butylthing3 I guess I could say that the ring is attached to a carbon and it branches off later separately.

We call this an iso butylcyclo hexane. Think of it like the main chain is attached to a carbon which is away from the branching off part. (Hope that helped... somehow).

And then the last one, 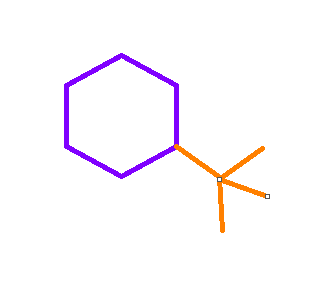 Let's look at the sec butyl cyclo hexane and see how it will be named systematically.

So first of all, the group that comes off the cyclo hexane.

Secbut It is a three carbon group with a methyl group attached.

In other words, 1 methyl propyl. 1 - for being attached to the first carbon of the propyl group. Methyl because it is just one carbon.

That... is just the name of that group that branches off the main carbon ring. And we put the branching group's name in brackets (I think...). 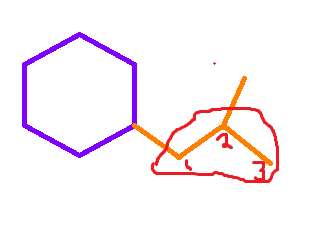 Now, the methyl group branches off the second carbon ⇒ 2-methyl and the whole group is a propyl/three carbon group ⇒ 2-methyl propyl.

That's just the side group, we need to name the whole molecule!

So we write, di methylethyl. But we gotta show which carbon those methyl groups are bonded to ⇒ 1,1 - di methyl ethyl.

Of course that's not the end of it, we have to name the whole molecule!~

I haven't done a note on how to name carbon rings yet... I think you guys get the idea. But I'll write another note or so if you found this confusing.

Feel free to comment on any questions, queries etc. I am writing this post at 2:33 am... So it's likely that I might have made a few mistakes. If so, feel free to correct me.

Name the compounds with spacing. This will help the reader to understand the naming better.

That's how my teachers teach me. Simple and logical approach.

It helped me review the topic :D

Alright! I shall edit it. Thanks for the feedback. ^^

No no no! Not that way. Make It Like : s-butyl cyclohexane

Thanx for considering my feedback.

This is phenomenal! I just started learning about OC and this is really interesting.

Nice post, brother. I am highly interesred in nomenclature and this post was awesome. I have a question. When is sec- used??

Well, even IUPAC accepts these common names. So, I prefer them more as they are easier to use.

@Priyansh Sangule – But I prefer systematic names because they go by the rules and I don't have to jam in the common names.

@Himadri Shee – I prefer using the one which is easier .

Thanks. I have a doubt. Which chain is chosen as the main chain when cyclic ring and aliphatic chain are joined? For example, which would be correct: Cyclopropylpropane or Propylcyclopropane?

@Himadri Shee – Cyclo will go in first. So it must be Cyclo propyl propane .