Sorry for being late guys, hahah... Been busy with valentine and stuff. Lul.

So far, we got to name alkanes which had single carbon chains. Now, let's deal with something more complex.

Here we don't have a single carbon chain, it starts to branch off. I went ahead and counted how many carbons there are in a single chain. 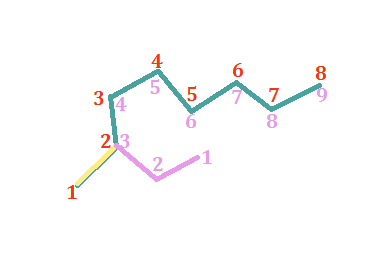 So what we do is look at the longest chain. In this case, it's the nice purpley chain. Think of it like the backbone of our naming.

What's kind of sticking off our main carbon chain? It's another carbon (w/ three hydrogens)! True?

Maybe you might be tempted to say methane, but no... It's attached to other things. But it would be right to use the prefix: meth. 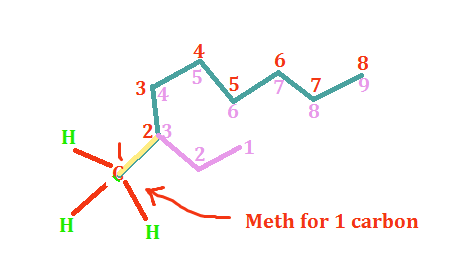 And we (IUPAC) made it so that it would be called methyl. The yl from methyl means it branches off a longer chain.

Thus, let's call it... methylnonane, but there's one problem. This

This is also methylnonane, true?

Methyl3 It goes according to what we did so far. 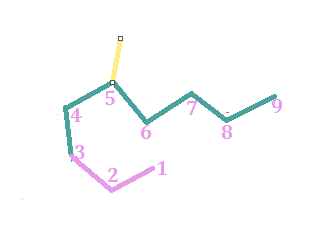 Wrong. And so on and so forth.

So how would you name those things differently? The way we do that is, number the carbons on your main chain, then look at which carbon # it is bonded to.

First one, the methyl group is with the third carbon on the main chain. Hence, we call this... 3 - Methylnonane.

Four, this would be called 4 - Methylnonane.

And you can try naming the last one. Hahha.

Great Post! btw,you are doing a great job with the pictures. Well done

Thanks! Happy Valentine's Day to you too!