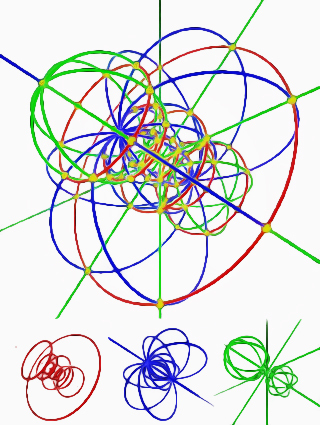 Calvin Lin made a wonderful set explaining multiple dimensions. In the questions, the volume of a sphere with its radius in 4 dimensions was derived.

What real world applications are there for the concept of the 4-dimensional sphere? Many people throw around the idea of 11-dimensions in string theory, without really explaining the significance/involvement of the higher dimensions.

On Mathematics Stack Exchange, Calvin wrote that "Lots of branches of mathematics currently have no application in any other field or the real world. ... However, that does not preclude the possibility that someone eventually finds a relevance for it. Before the 20th century, Number Theory was considered recreations 'useless' math. It has since spawned a huge industry of security."

Are hyperspheres part of a branch of Mathematics with no current real world application?

Also, what are the implications (mathematical or real world) of finding an equation for the volume of the 4 dimensional sphere?

There's a lot of reference to n-spheres (and k-simplexes) in linear programming and information theory, where n-dimensional data sets are involved. But those are abstract things, it still leaves the question, "but how do these things have a consequence in the real world out there?". Well, if we're going to get dramatic about this, some cosmologists now wonder if the Big Bang is actually the ejecta from the collapse of a 4-dimensional star into a black hole in 4D+T space, that is, 4D spatial dimensions plus time, and that our universe is 3D brane of the event horizon of that 4D+T black hole. If observations agree with predictions by this cosmological model, then maybe we can stop thinking that hyperspheres are just clever mathematical inventions with "no real world relevance".

What I want to know, what could be the physical significance of the fact that it's the unit 5-sphere that has the maximum volume, or that it's the unit 7-sphere that has the maximum surface area? Or while we're at it, the fact that the number of regular polytopes peaks out in 4D, and the richest topologies come from 3D spherical surfaces (not to be confused with ordinary 2D spherical surfaces)? My hunch radar is telling me it's those kinds of mathematical truths of a very abstract nature is the underlying reason why most of physics are limited to relatively small dimensions, i.e., 3D, 4D, maybe 11D, or even 26D, but nothing like the vast infinity of possible dimensions. It's quite possible that once we get into very high dimensions, nothing much interesting really happens.

Edit: This idea of a 4D-T black hole being the genesis of our universe has gone a little more mainstream just now. See the August 2014 issue of Scientific American, which features "The Black Hole at the Beginning of Time", a very interesting read. I recommend it, and I am resharing this note to bring attention to the new Scientific American issue.

Really insightful response! However, the fact that a 5-sphere has the maximum volume or that the 7-sphere has the maximum surface area, may not necessarily imply that higher dimensions are "uninteresting". Perhaps it is because we live in a world of 3 spatial dimensions, that we have good understanding of simple properties like surface area and volume and number of regular polytopes and rich topologies. Perhaps the higher dimensions have properties inapplicable to the lower dimensions that we are more familiar with, and as such we do not yet know about these properties. While this argument does not prove that very high dimensions can apply in Physics, it certainly holds the door open for the possibility of applications in fields outside of Mathematics.

Ryan, actually I do mean to claim that the "mathematics" of very high dimensions isn't as rich as of the small dimensions (perhaps with some few exceptions), and I don't think it's necessarily because of our ignorance. If we hypothesize that physical reality comprises of "anything that is possible with at least some deference to logical consistency", then most of the interesting properties of physics emerges at the small dimensions, and hence "we'll tend to exist in the small dimensions", if we exist at all. But this is all armchair philosophy at this point. I doubt seriously that we'll discover that the grand "Theory of Everything" (if there is even such a thing) is something that exists in some really high dimension, say, 1000000D. As another example, it wasn't too long ago when mathematicians completed listing all the possible finite simple groups. A rare few have extremely high orders, but the vast majority of them have small orders, and much of physics is dominated by those groups of small orders.