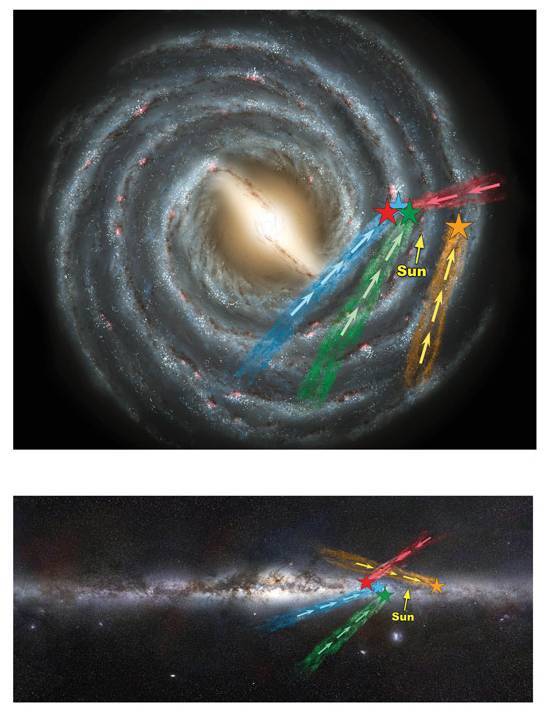 A newly published study details the discovery of a new class of “hypervelocity stars” – stars that are moving at speeds of more than a million miles per hour relative to the Milky Way and that are fast enough to escape gravitational grasp of the Milky Way.

An international team of astronomers has discovered a surprising new class of “hypervelocity stars” – solitary stars moving fast enough to escape the gravitational grasp of the Milky Way galaxy.

“These new hypervelocity stars are very different from the ones that have been discovered previously,” said Vanderbilt University graduate student Lauren Palladino, lead author on the study. “The original hypervelocity stars are large blue stars and appear to have originated from the galactic center. Our new stars are relatively small – about the size of the sun – and the surprising part is that none of them appear to come from the galactic core.”

The discovery came as Palladino, working under the supervision of Kelly Holley-Bockelmann, assistant professor of astronomy at Vanderbilt, was mapping the Milky Way by calculating the orbits of Sun-like stars in the Sloan Digital Sky Survey, a massive census of the stars and galaxies in a region covering nearly one quarter of the sky.

“It’s very hard to kick a star out of the galaxy,” said Holley-Bockelmann. “The most commonly accepted mechanism for doing so involves interacting with the supermassive black hole at the galactic core. That means when you trace the star back to its birthplace, it comes from the center of our galaxy. None of these hypervelocity stars come from the center, which implies that there is an unexpected new class of hypervelocity star, one with a different ejection mechanism.”

Astrophysicists calculate that a star must get a million-plus mile-per-hour kick relative to the motion of the galaxy to reach escape velocity. They also estimate that the Milky Way’s central black hole has a mass equivalent to four million suns, large enough to produce a gravitational force strong enough to accelerate stars to hyper velocities. The typical scenario involves a binary pair of stars that get caught in the black hole’s grip. As one of the stars spirals in toward the black hole, its companion is flung outward at a tremendous velocity. So far, 18 giant blue hypervelocity stars have been found that could have been produced by such a mechanism.

Now Palladino and her colleagues have discovered an additional 20 sun-sized stars that they characterize as possible hypervelocity stars. “One caveat concerns the known errors in measuring stellar motions,” she said. “To get the speed of a star, you have to measure the position really accurately over decades. If the position is measured badly a few times over that long time interval, it can seem to move a lot faster than it really does. We did several statistical tests to increase the accuracy of our estimates. So we think that, although some of our candidates may be flukes, the majority are real.”

The astronomers are following up with additional observations.

The new rogues appear to have the same composition as normal disk stars, so the astronomers do not think that their birthplace was in the galaxy’s central bulge, the halo that surrounds it, or in some other exotic place outside the galaxy.

“The big question is: what boosted these stars up to such extreme velocities? We are working on that now,” said Holley-Bockelmann.

That is an interesting discovery. I found what I think is the original article here. In the future, when you would like share a cool story from elsewhere on the web could you please submit a note that links promptly to the original article, rather than copying and pasting it into your note.

In general the best way to get a good conversation going is to share a link and then state your opinion of the story and what you would like to talk about. That will make it more likely that people will want to discuss it and reshare your note.

Oh I am sorry ! I was unaware about this since I am new here....and I was not knowing about this ^. Thanks :D

It's Okay. Definitely feel free to post cool articles you find on the web, just be sure not to copy them.