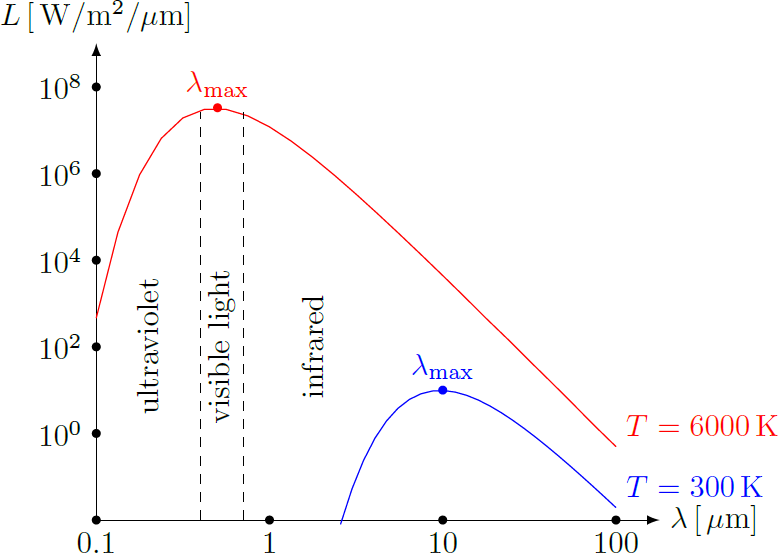 Due to their temperature, all bodies emit thermal radiation, which is electromagnetic radiation. This radiation is also often called black-body radiation, since the theory assumes a body, that is completely opaque and non-reflective. Depending on the temperature of the body, microwaves, infrared radiation, visible light, UV radiation or even X-ray radiation can be emitted to certain proportions. The maximum radiation occurs for a black body at a wavelength λmax​, which results from Wien's law: λmax​≈T2898µmK​​ where T denotes the abosolute temperature in Kelvin. The complete spectrum of thermal radiation resembles a bell curve with a maximum at λmax​, as shown in the diagram to the right (Planck's law). With increasing temperature, the maximum shifts to smaller wavelengths and higher frequencies. While the sun, with a surface temperature of around 6000 Kelvin, emits a major part of the radiation as visible light (λmax​≈500nm), the radiation peaks at room temperature in the mid-infrared range (λmax​≈10µm).

But not only the wavelength range, but also the total power of the heat radiation (area under the spectrum curve) depends on the temperature of the body. The total intensity of thermal radiation (power per surface area) follows the Stefan–Boltzmann law: I=AP​=ε⋅σ⋅T4​ where σ=5.67⋅10−8W/m2/K2 is the Stefan-Boltzmann constant and 0<ε≤1 is the so-called emissivity. Emissivity represents the effectiveness with which a body releases thermal radiation. An ideal black body corresponds to the case ε=1, while a body, that does not absorb all incident radiation (a gray body), is characterized by an emissivity ε<1. Note, that due to the fourth power in the Stefan-Boltzmann law, a doubling of the temperature means a 16-fold increase in thermal radiation.