Being Equal To Something Greater Than Yourself: Another Fallacy 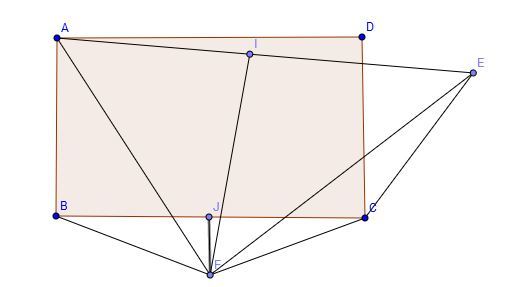 In our previous post , we saw a mathematical fallacy and hopefully you enjoyed it. In this post we're going to see another fallacy. This one's one of my favorites because it doesn't rely on an algebraic technicality like division by zero. What makes this one work is far more devious!

The title of this post is quite thought-provoking [hopefully]. Can you be equal to something that is greater than you? No. That would be illogical. But we're going to use a loop-hole to 'prove' that. Brace yourself! 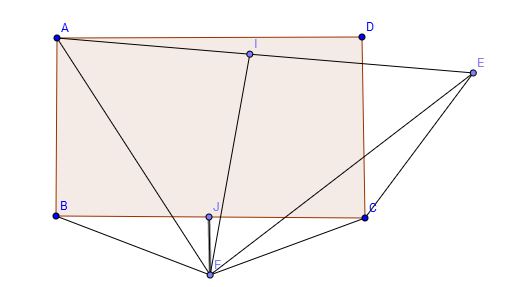 Now, since F is a point on the perpendicular bisector of AE,

Because of a similar argument,

And, AB=DC because they're the opposite sides of a rectangle.

Notice that we've just proved that △ABF and △ECF are congruent [SSS congruence].

But that's impossible! Because ∠ABJ is a right angle and ∠ECJ is an obtuse angle! ∠ABJ is equal to something greater than itself. Can you spot the fallacious step?

Now's the time I tell you stop reading and think about this for a while [even though most of you don't listen :)]. So, start thinking!

Congratulations to everyone who gave this problem some time and thought! Before we find out our mistake, I want to ask you a question.

Is it necessary or compulsory to draw an accurate figure in order to do a geometric proof?

No. Actually you can't ever draw an accurate figure or diagram to be completely strict. We draw figures in our proofs as references. Figures help us follow the arguments presented in a proof. But they are not a necessity.

The figure I gave you in the beginning of the post is inaccurate. It is misleadingly inaccurate!

So, did I commit a crime?

Everything up until the last step of this 'proof' is 100% correct [if I haven't made any typos]. But in the last step we assumed something without proof and that led to this absurd conclusion.

When you draw the an accurate enough figure, you'll see that even though ∠ECJ is an obtuse angle, it is not equal to ∠ECF−∠JCF. We only assumed this from the figure [which was inaccurate]. We didn't prove it. And look what it did!

Here is a more accurate depiction of the whole situation: 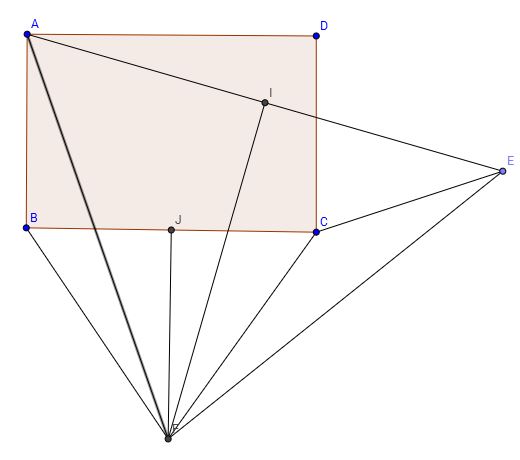 Now you can see that ∠ECF−∠JCF​=∠ECJ. Our faith in reality is restored!

If you want to check if everything else is okay, you can apply the previous arguments in the new picture. You'll see that everything works. The sides really are equal and the triangles are congruent as well. Everything works up until the last step where we assumed something unwarrantedly.

Here I am with another post! Feel free to post your comments and feedback! And I hope you enjoy this!

Extremely intriguing fallacy you have there! I never knew these types of erred proofs could go out any farther than dividing by 0, or taking the logarithm of a negative number. Great job, again!

And false proofs don't have to be restricted to these as well! Here is an adaptation of a classic fallacious proof that uses flawed ideas of induction [you probably know about this one as I see you have a comment in the comments section about it].

U hit the right spot with this post ! Awesome! U know i always disliked geometry because at the back of my mind i knew there might be such inaccuracies with my drawings this eats away at me right through my solution or proof u will agree that given long proofs which also involve lots of algebraic manipulations it becomes excedingly difficult to spot these subtleties any way out anyone?

Nice. The original proof fails because we didn't consider the direction of the angle. In your explanation, you show how the angle is actually 'the other way', compared to what we thought the initial diagram indicated.

Have you seen the "proof" that all triangles are isosceles?

Yes, I have. And I was thinking of posting a note about that in the near future.

That one was pretty cool :P I saw it when I was reading this book called "the math olympian" (i think the author took it down from his site now...) The girl in the book solved it using a two-column proof.

May I ask how did you create the diagrams?

hello,i am madhuri i m new on brilliant... i want to ask about mathematics...how to solve integration problems.....

Check out the Calculus - Integration and Mechanics practice sections!

i also asked about physics problems...