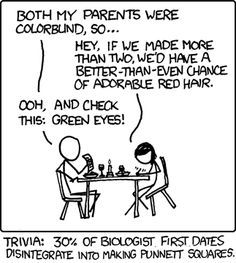 The Bio section of Brilliant has been the undernourished runt of the topics, and that makes me sad. Here is some basic bio stuff, with problems soon to come. Like and reshare to keep the Biology section alllliiiiiivvvve!

The laws that govern how characteristics are passed from one organism to another are encompassed in the study of genetics. At the molecular level, information in the form of nitrogenous bases is stored in the molecule Deoxyribonucleic Acid, commonly abbreviated as DNA. DNA is shaped as densely coiled helices, called chromosomes, found in the nuclei of cells. All the DNA of an organism is called a genome, and a section of a chromosome is called a gene. An allele is an alternative form of a gene. The information in DNA dictates how everything about the organism will occur; DNA is like the blueprint of life.

Let’s get to genetics for real!

In the interest of genetics, the physical characteristic of an individual that is derived from gene is called a phenotype. Many characteristics of organisms are determined by different combinations of alleles being present. Different combinations of alleles can produce different phenotypes. In basic genetics, there are two forms of alleles: dominant and recessive. Uppercase and lowercase letters are used to symbolize alleles; for example, a geneticist could call the dominant allele for white flowers W and the recessive w.

Many breeding patterns in organisms can be predicted by models called Punnett Squares, which are square thingies named after a guy called Punnett. The best way to start explaining is with an example:

For some phenotype, controlled by simple dominant and recessive allelesA and a, this Punnett square shows the expected breeding results between two parents with alleles Aa. A Punnett square is organized so that the parent genotypes are along the top and left, and the offspring genotypes are in the middle. The number of squares corresponds to the proportion of offspring having that genotype. The way to fill out a Punnett square is bring each allele letter down its column or across its row. This example means that 50% of the offspring will have the genotype Aa, 25% will have AA, and 25% will have aa.

Most of my info comes from what I remember from last year's bio class, so if there is anything flawed please let me know!

DNA is not 'shaped' as densely coiled helices known as chromosomes rather it is a double helix structure with each chromatid of a chromosome containing one double helix.