But You Don't Look Like a Programmer! And Other Things I've Heard as a Female Software Engineer (Professional Programming Series Part 2) 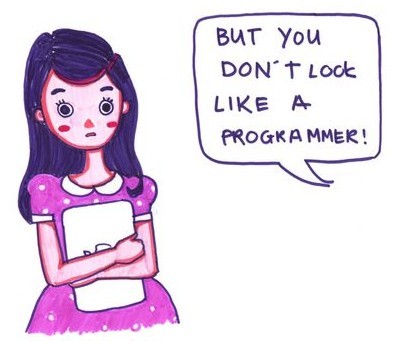 This is the second main post of the Brilliant Professional Programming Series.

I went to a software developer conference in San Francisco about a month ago. All the conversations started with: ‘Have you played this video game?’ or ‘Did you watch that game last night?’ I don’t play video games or watch any sports, so I sat quietly. No one tried to talk to me or asked me what I do or what I’m doing at that particular talk. I felt alienated. I looked around to find other female developers. There were only four women in a room of about 20 people. It made me wonder: why do I feel so alone? why are there so few female developers?

What is it like being part of the minority?

I hate being asked what I do professionally. I love what I do, but I get a small panic attack every time someone asks. Sometimes this happens – Me: 'I’m a software engineer!' Stranger: 'That’s awesome! What’s your stack?' But much more often, this happens:

Me: I’m a software engineer!

Stranger: Really? You don’t look like a software engineer.

Why don’t I look like a software engineer? Is it my gender? Is it my age? Other things I commonly hear are: ‘Oh, are you an intern?’ and ‘Oh, are you a student?’ No I am not an intern, and no I am not a student. Like I said before, I am a software engineer. I know that I do not fit the common stereotype of a programmer, but that stereotype needs to change. These subtle and not-so-subtle sexist comments are not okay.

I moved to San Francisco about a year and a half ago. I didn’t have a job offer, but I had a degree in computer science and a year of experience as a front end engineer and a whole lot of enthusiasm. That enthusiasm soon wore down.

I learned that some people think I am a lesser engineer or not an engineer at all because of the way I look. I was at a party and met some engineers who worked at a company I was set to interview at later in the week. A mutual friend introduced us: ‘This is Kelly! She’s interviewing for a position on the engineering team.’ The responses shocked me: ‘You’re kidding, right?’ and ‘What do you actually do?’ I was livid. I wasn’t taken seriously. Do people joke about being engineers? No. Did I cancel that interview? Absolutely yes.

This is a culture that focuses heavily on drinking and partying, and in order to fit in I was required to join. I interviewed with two guys who were starting a new company. The interviews went well, and it seemed like there was a good cultural fit at first. I even got an offer. Then I got a phone call. I had to spend the weekend with them in Tahoe so we could ski and drink (in hot tubs) and get to know each other. When did requiring potential employees to get half naked and drunk in a hot tub become okay? Would this have been a requirement if I were a man?

Sexual harassment is pervasive in the tech scene. This next interview started like any other, a bit casual but nothing too strange. Then came very personal and very inappropriate questions. ‘How long have you lived in San Francisco?' ‘Where do you live?’ ‘How old are you?’ ‘Do you drink?’ ‘Do you smoke weed?’ I tried to hide my discomfort by avoiding the questions. In retrospect, I should have stopped the interview immediately but I didn’t. I had never been in that situation before. I didn’t have the confidence to stand up to him and tell him that he was being inappropriate. He ended the interview with ‘I’m having a party this weekend, you should come. I’ll text you.’ And he did text me. And called me. A lot. ‘Hey, you should come to the party.’ ‘Why didn’t you come to the party?’ ‘Well I guess you’re not interested.’ He meant interested in him, not the job. I always thought that this was common sense, but apparently I have to make it clear: sexual harassment is never okay. It is not okay during interviews, it is not okay in the workplace, and it is not okay in any other circumstances.

This behavior has become accepted in our society. People make excuses for these inexcusable comments and actions. ‘Because you should be used to it by now. Because there are so few women in computer science.’ I will never accept those excuses. I will never get used to it. 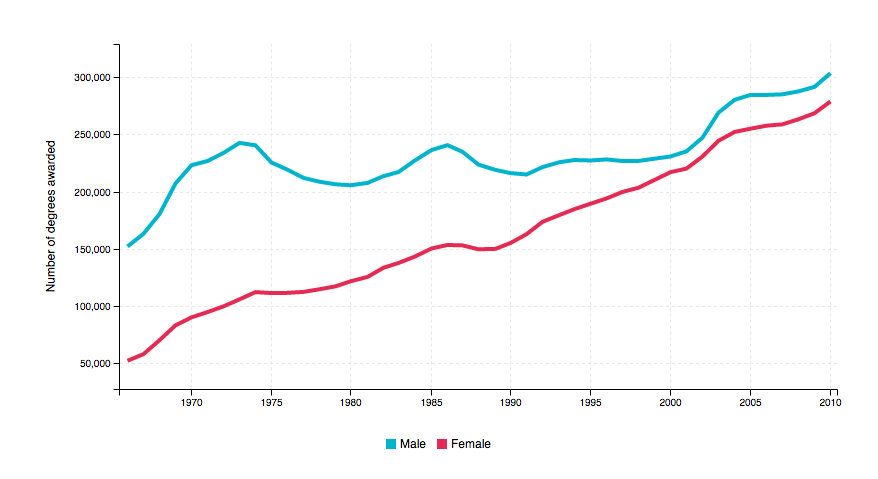 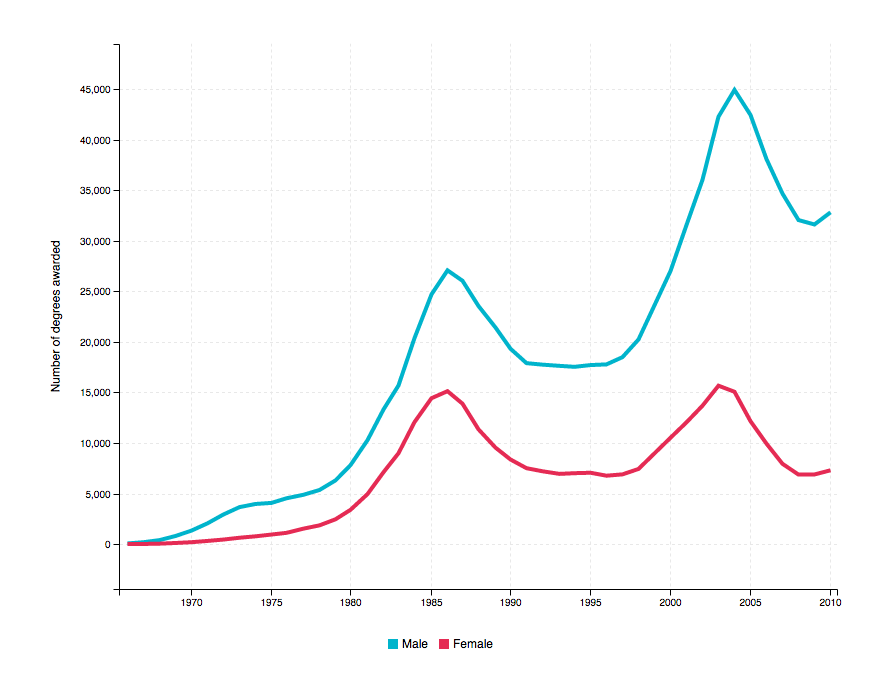 Made with data from the National Science Foundation

Why are those numbers so low? This Planet Money podcast points the finger at personal computers, which were introduced in the 1980s. They were marketed towards boys, so lots of boys grew up playing with computers. As a result, young men had more experience and interest in computers and were more likely to study computer science in college. Most girls didn’t grow up playing with computers, so very few had any experience by the time they entered college. These young women felt that the men were far ahead of them in computer science classes and consequently dropped out.

I started the CS program at UT Dallas at age 16. I got my bachelor’s degree in CS at age 19 in the spring of 2012. In my graduating class, less than 10% of the students were women. It didn’t start this way. About a third of the students in my first year classes were female. In my second year that number dropped significantly, and in my third and final year, I was either the only girl or one of two girls in the class. This didn’t come as a shock. I was constantly put down by my male peers (even though I consistently made the top test scores). No one took me seriously. Everyone just assumed that I would switch majors. ‘Do you even like computers, Kelly?’ That just made me want it more because anything you can do I can do better.

These days, nearly everyone has a computer. But there is still a large gender gap in the field of computer science. Why? Even though girls have just as much experience using computers as boys, computer science is still being marketed towards boys.

The programmers portrayed in media are all overwhelmingly male. The recent films about hacking feature male hackers and are geared towards men (lots of violence and sex). And the films that do have female hackers in minor roles objectify the women and paint them as helpless. Spoiler alert: there is a female hacker in Furious 7. But she’s nothing like the male hacker in Blackhat. He can code like hell and kicks ass. She doesn’t fight; she can’t defend herself and has to be saved multiple times. The male characters ogle at her and remark that ‘with a body like that, she shouldn’t spend all her time behind a computer’.

What should you do about it?

I don’t expect things to change overnight, but things must change soon. This is my call to action:

Thank you for writing this; it really opened my eyes as to how discriminatory this particular sector is. (While no sector is free of discrimination (of any kind) by a long shot, this sector does seem especially "guilty".) Sometimes I think men only change their atrocious behaviors when they're "called out" by other men, so in that sense, we are all part of the solution.

Ma'am you made Brilliant what it is today. You are one hell of a programmer !!! We respect your work irrespective of your gender. Please don't pay heed to all these negative comments as ,if you had also quit like all other girls in your college, we wouldn't have got this brilliant app Brilliant.

I will second the thanks of Brian and also say that it is a shame that women are being discriminated against in the tech industry. I can only barely imagine the potential that has been or is being lost - because some women and people, in general, decide against a career in technology as a result of discrimination in the industry against some categories of people.

That link says, "Google had some of the highest rates: 17 percent of its technical staff is female." I mean Really?? I thought it must be ~40% atleast.

Pranjal Jain - Sadly, that is not the case. In the US, women hold only ~25% of tech jobs. And in Silicon Valley, that number is closer to 15%.

I made some charts with interesting data from the National Center for Women in Information Technology: 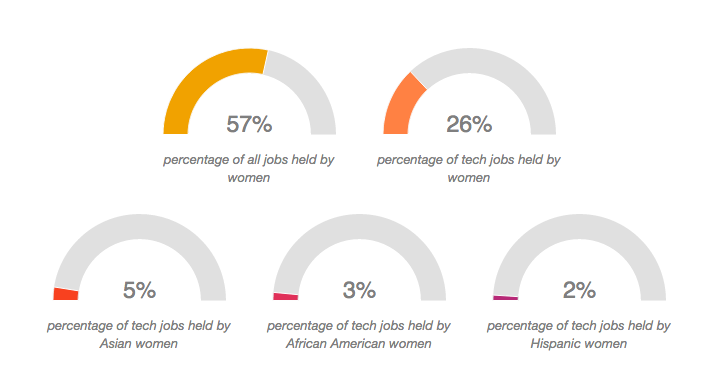 @Kelly Tran – Hats off . your story inspired many of us...well don't get demoralized...bad experiences will help you to act smarter.........

@Kelly Tran – yes mam the condition is same in India

Kelly Tran ! you are brilliant . Just keep going on and believe in yourself .

I develop software as well. Been coding for a year now. What a fun year...

Hi Kelly, I love your article.

When girls are interested in tech, they often meets with opinion that 'it's not for woman. When I started my studies at the Faculty of Computer Science my grandma contemptuously said, that programmer is not profession for well-mannered girls. Hearing something like that from a family is painful, but I didn't gave up, now I'm also working as junior software engeener (still thinking about PhD in Bioinformatics). And I try to help girls to learn programing in my local organisations and events like Django Girls, because for many of them it's a promise of better life and of course it's fun. I wonder, can I translate your article to polish?

Absolutely! Can you just be sure to link back to Brilliant?

It's really great that you volunteer with Django Girls - I spend most of my free time volunteering for Girl Develop It :)

Can you send me email, I will resend you translation (polish with english comments, because some sentence I'm not able to translate exactly the same)