Can We Transform The World Into a Doughnut?

In the mathematical area called Topology. A sphere (a geometric solid like a ball) is homologous or similar to a Torus (another geometric 3 dimensional solid shape like the shape of a ring doughnut).

Obviously, there is a difference between the shape of the ball and a doughnut. A ball is perfectly round, while the doughnut has a hole in the middle like the floaters we use when we swim. But in topology, they say that "There's not much a difference."

Another one. In topology, a coffee cup is the same shape as the doughnut. The explanation they give is: Because they both have a hole. The coffee cup's hole is the space between the handle. And then, just do some transformation etc...etc... and there you have it, your mug turned into a doughnut!

By using the logic of math if a=b, and b=c, then a=c, substituting the ball for a, doughnut for b and mug for c, then , that implies, that the ball is the same as the coffee cup! Okay, then.

Now, isn't it that basically, the world is the shape of a sphere, or a ball? I mean. Yes, I know that it is not perfectly round. But it has no hole or puncture whatsoever anywhere as the doughnut, a mug, or a floater has, right? But again, topology has something to say: If we can transform the ball into a doughnut and a coffee cup, we can transform the world into a doughnut.

The world can be transformed into a doughnut (sphere becoming a torus, to be more generic) by the mathematics of what topologists now call: Surgery, invented by Mr. G. Perelman.

Topology is really awesome, and I adore topologists alot. And before I close this, I just want to add the quote of the Fields Medal recipient on 2007 (but declined to), Mathematician and topologist Grigory Perelman: "I do not need a prize,cash, or even fame. I could shrink the world into a single point, what more can I ask for?"

Do not forget graph theory too.

Remember Leonard Euler, the mathematician who invented Graph Theory? He played around with many different graphs and discovered another interesting property related to the number of vertices, edges and faces. This applies to planar graphs, graphs which can be drawn so that no edges overlap unless they meet at a vertex

If we have a look at the last two rows of the table above you will notice that “faces + vertices” is always one more than the number of edges, or that

Euler managed to prove that this is true for all planar graphs, and it is known as Euler’s formula.

Here is another famous problem that is related to Graph Theory:

We want to colour a map of countries so that no two adjacent countries get the same colour. What is the maximum amount of colours we need to be able to colour any map?

Here is an example that works with four colours. Notice that it wouldn’t work with only three colours: eventually we would always arrive at a point where we cannot colour a state because all three colours have already been used on its neighbours.

But are four colours always enough? Or are there certain maps for which we need at least five colours? In 1852, Francis Guthrie together with Augustus De Morgan (1806 – 1871) conjectured that four colours are enough to colour any map: the four colour theorem.

And while the problem is easy to understand, proving it seemed to be rather more difficult. There were several early proofs, and in some cases it took more than 10 years until a mistake was found. It is reasonably simple to prove that five colours are always enough – but the four colour problem remained unsolved for many years.

The four colour theorem can be translated into graph theory: we convert every country into a vertex and whenever there is a border between two countries we connect their vertices with an edge. Now we want to colour a graph so that vertices connected by an edge get different colours.

There's all kinds of natural arches in the world, so we don't need to do a transform to change the genus of the Earth. It's already a doughnut.

But a doughnut only has 1 hole. The existence of many natural arches would mean that we are a many-holed doughnut!

So, maybe a waffle fry? 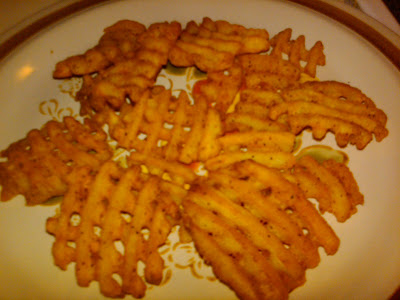 You know, this reminds me of the Jewel Cave complex in the Black Hills of South Dakota. Yeah, that would be a better description. It has over 170 miles of passages that look a lot like your picture. So, what's the topological genus of Planet Earth? Some really big number.