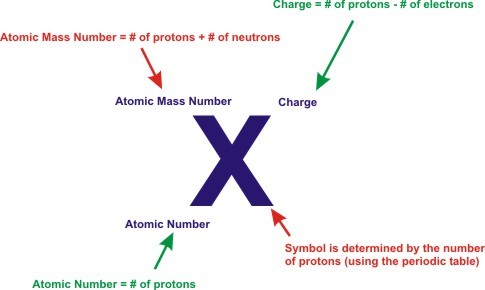 Basic Atomic Structure ~The number of protons in an atom or ion determines what element it is.

The atomic number of an atom or an ion is equal to its number of protons.

Example: potassium (K) in the periodic table, it has an atomic number of 19, meaning that all potassium atoms and all potassium ions contain 19 protons.

Example: A particle with 6 protons and an atomic mass number of 14 has 8 neutrons.

Example: A particle with 34 protons and 36 electrons has a charge of -2.

Isotopes are atoms of the same element that have a different number of neutrons. Therefore, isotopes have the following characteristics:

Isotopes have the same atomic number (same number of protons), but a different atomic mass number (a different number of neutrons). Isotopes behave the same chemically, because they are the same element. The only difference is that one is heavier than the other, because of the additional neutrons.

For example, carbon-12 and carbon-14 are both isotopes of carbon. Carbon-12 has 6 neutrons; carbon-14 has 8 neutrons.

Two elements are isotones if they have the very same neutron number, but different proton number. For example, boron-12 and carbon-13 nucleuses both contain 7 neutrons, and so are isotones.

There is also something called an isomer, however that's getting more into the structure of a chemical compound.

Just a bit of clarification on those terms. You'll know this feel when you study biology. Hahahahah...

Also, a way to visualise this mathematically (lol) isotope, isobar and isotone are like a set of chemical elements or compounds (in the case of an isomer).

Hope this helps and no one gets confused between them. ^^ And thank you for those contributing these notes.

Thanks for you additional notes :)))

No worries, my pleasure. ^^

It seems like Nicole will provide some helpful notes on Chemistry. She is my classmate and she is very interested in science especially Biology. Thumbs up for you Nicole!

Thanks... But you are much better than me :)