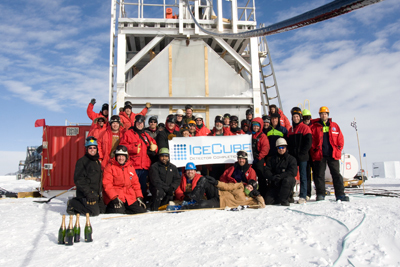 The Physics World award for the 2013 Breakthrough of the Year goes to "the Ice Cube South Pole Neutrino Observatory for making the first observations of high-energy cosmic neutrinos". Nine other achievements are highly commended and cover topics ranging from nuclear physics to nanotechnology. The researchers did this by building a colossal detector deep under the ice at the South Pole. Despite the many challenges of doing science in such a remote and inhospitable environment, the IceCube South Pole Neutrino Observatory has spotted extremely high-energy neutrinos that originate from far beyond the solar system.

Neutrinos are notoriously difficult to detect and IceCube uses a huge 1 km3 volume of ice as a giant particle detector. IceCube can also determine the direction from which a neutrino came, making it an incredibly useful telescope. Indeed, it could solve an important astrophysical mystery by revealing the origins of cosmic rays. These high-energy charged particles are created in the same locations as cosmic neutrinos but are deflected en route by magnetic fields and cannot be traced back to their origins.

According to IceCube's principal investigator Francis Halzen, by far the greatest challenge in building the detector was drilling the 2.5 km-deep holes in the ice into which the detector components were lowered. In total, 86 holes each 60 cm in diameter were drilled at a rate of about three per week using hot water. The drilling could only be done during the brief polar summer and as a result it took four years to complete the process. Pleasant surprises

As the detector was being built, the scientists got several pleasant surprises, says Halzen, who is at the University of Wisconsin-Madison in the US. One was that the ice in the region of the detector has much better optical properties than expected. Indeed, it is much clearer than the pristine fluids used in other neutrino detectors.

Clarity is important because IceCube uses strings of photomultiplier tubes to detect the faint Cerenkov light that is given off by fast-moving charged particles that are created when a neutrino collides with a nucleus in the ice. As well as boosting the performance of the detector, the high quality of the ice will make it easier to expand the detector volume, because new holes can now be separated by about 300 m rather than the current 25 m. Particle showers Bert and Ernie, which we seen in IceCube Bert and Ernie

The biggest surprise, however, was the measurement of a shower of particles created by an extremely high-energy cosmic neutrino – dubbed Ernie – that was made even before the detector was fully commissioned. What was unexpected about Ernie – and Bert and about 20 other neutrinos – is that a large portion of the energy of the neutrino was deposited in the detector. This allowed the team to determine minimum values of the energies of these neutrinos to within about 15%. Tracking muon neutrinos

The team had thought that such events would be extremely rare, and had planned on focusing its attention on cosmic muon neutrinos. These particles interact with the detector to produce a muon that can be tracked with great accuracy. This means that the cosmic origin of the neutrino can be pinpointed to better than 0.4 degrees – much better than for Ernie and Bert – but its energy cannot be measured accurately. So now scientists using IceCube have two distinct ways of studying cosmic neutrinos.

IceCube is expected to run for 20 years, and in addition to supporting research in neutrino physics and neutrino astronomy it has also joined the hunt for dark matter. It will also be used to study the interior of the Earth by the neutrinos it emits.

"The success of IceCube builds on the efforts of hundreds of collaborators around the world – from the design, the deployment in a harsh environment and the AMANDA prototype to data harvesting and physics analysis. The Breakthrough of the Year award is a superb way to ultimately honour these efforts," says Olga Botner at Uppsala University, who is an IceCube spokesperson.

Since the 1990s, physicists had suspected that some nuclei have lopsided shapes that are driven by subtle underlying "octupole" interactions between their constituent protons and neutrons. That prediction was confirmed this year for radon-220 and radium-224. As well as shedding further light on the difficult problem of calculating the properties of large nuclei, pear-shaped nuclei could also offer a way of measuring the permanent electric dipole moment of an atom, which is forbidden by the Standard Model of particle physics. Creating 'molecules' of light

"To Mikhael Lukin at Harvard University and Vladan Vuletić at the Massachusetts Institute of Technology and colleagues, who are the first to create 'molecules' of light."

Photons normally pass through each other without interacting – so the idea of a molecule made of light seems bizarre. But a photon does interact with the media that it passes through, which can affect how the media responds to subsequent photons. By carefully engineering this interaction in an ultracold atomic gas, Lukin, Vuletić and colleagues have caused pairs of photons to draw together as they pass through the medium. The result is a two-photon molecule of light that could find application in optical communications and computing systems. Planck reveals 'almost perfect' universe

Our basic understanding of the universe underwent an important revision this year thanks to the scientists working on Planck, which was launched by the European Space Agency in 2009. We now know that the proportion of the universe made up of dark energy is slightly less than previously thought, but there is more dark matter and ordinary matter than previous studies of the cosmic microwave background radiation (CMB) had suggested. Planck also concluded that the universe is about 80 million years older than previously thought. In addition, the Planck data contain tantalizing hints of anomalies in the temperature of the CMB in different parts of the universe, which could point towards new physics. 'Quantum microscope' peers into the hydrogen atom

"To Aneta Stodolna of the FOM Institute for Atomic and Molecular Physics in the Netherlands, Marc Vrakking at the Max-Born-Institute in Germany and colleagues for taking the first direct images of atomic orbitals."

Anyone who has studied science has seen representations of atomic orbitals, but until this year no-one had ever managed to actually take a direct image of an orbital. Stodolna and Vrakking took the atomic snapshot with their new "quantum microscope", which detects electrons that are ejected from helium atoms by laser light. When the atoms are put into a Rydberg state with an extremely large atomic orbital, the result is a clear image of the orbital's nodal structure. Quantum state endures for 39 minutes at room temperature

"To Mike Thewalt of Simon Fraser University and colleagues for storing quantum information for up to 39 minutes in a solid-state device at room temperature."

Quantum-information systems rely on quantum states that endure for long enough for information to be processed. Unfortunately, noise, heat and other environmental factors cause most quantum states to decay long before they are useful. What Thewalt and colleagues have done is to find a way to ensure that nuclear spins in a piece of silicon retain their quantum nature for an astonishing 39 minutes. This shatters the previous room-temperature record of 2 s and could bring us one step closer to "quantum money" that would be impossible to counterfeit. The first carbon-nanotube computer

Carbon nanotubes are tiny tubes of carbon with walls as thin as just one atom. They have a range of desirable electronic properties, which in principle could be used to make faster and more energy-efficient electronic devices. While other researchers have created transistors and other individual devices, Shulaker and colleagues developed a suite of new fabrication techniques that allowed them to integrate 178 carbon-nanotube-based transistors to create a computer that can store and execute a program. B-mode polarization spotted in cosmic microwave background

"To astronomers working on the South Pole Telescope for being the first to measure B-mode polarization in the cosmic microwave background (CMB) radiation."

The IceCube collaboration may have bagged the Physics World 2013 Breakthrough of the Year award, but another discovery from the South Pole also makes it into our top-10 list. It is for the first detection of a subtle twist in light from the cosmic microwave background (CMB), known as B-mode polarization. This twist has long been predicted and its detection paves the way for a definitive test of inflation – a key theory in the Big Bang model of the universe. The first laser-cooled Bose–Einstein condensate

The traditional way to making Bose–Einstein condensates (BECs), which are essentially macroscopic quantum states, involves cooling a gas of atoms using lasers to a temperature of near to absolute zero and then allowing the remaining hot atoms to escape via "evaporative cooling". This process is, however, time-consuming and discards most of the original atoms. Now, a team led by Florian Schreck is the first to cool a BEC using lasers alone, which is a much more efficient technique and could allow BECs to be used in a wider range of practical applications, including atom lasers. Hofstadter's butterfly spotted in graphene

"To three groups that have independently made the first measurement of Hofstadter's butterfly in a solid-state system. One group is led by Philip Kim of Columbia University, another is led by Roman Gorbachev of the University of Manchester and another by Pablo Jarillo-Herrero and Ray Ashoori at the Massachusetts Institute of Technology." Image showing a butterfly plot Butterfly seen at long last

Nearly 40 years ago, Douglas Hofstadter calculated the energy levels of electrons exposed to a magnetic field in a 2D solid and expressed the results in a stunning fractal pattern that looks like a butterfly. While the butterfly has been spotted in experiments that are analogous to 2D solids, it had never been seen in a real solid material.