Polygons of equal area can be cut up into identical sets of smaller pieces. Amazing, right?

A beautiful new result is that this is also true of hinged dissections, like in the gif. Here’s the math behind the beauty, co-developed by longtime Brilliant user Scott Kominers.

Before we look at a hinged dissection, let's first consider the much simpler case of dissecting two polygons with equal area, where we want to cut them up smaller pieces which allows us to rearrange one polygon into the other. We present the main ideas, along with a quick sketch of the proof: 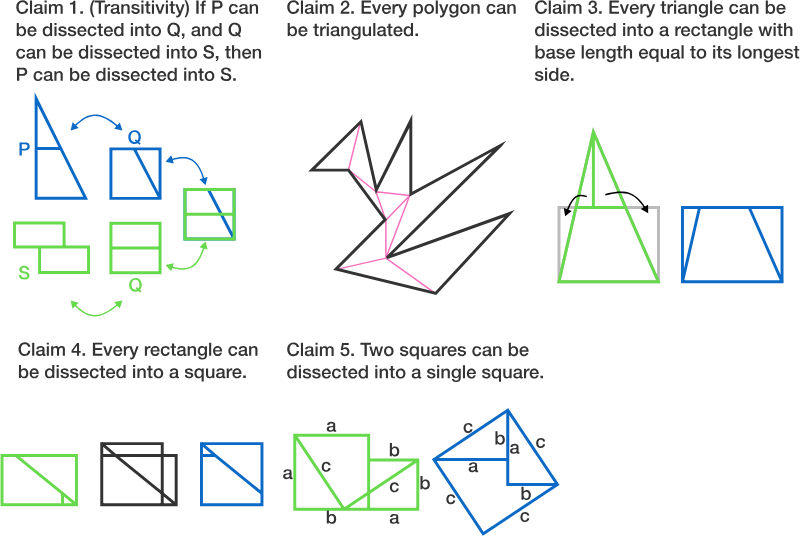 With these ideas, we can prove that it is possible to dissect 2 polygons of equal area:

Proof of dissection: The goal is to dissect a polygon of area a into a square of side length a​. Then by claim 1, any 2 polygons of equal area can be dissected into identical pieces.
Suppose we have a polygon P of area a. We triangulate it into smaller pieces (Claim 2), and dissect each of them into a rectangle (Claim 3), which we then dissect into individual squares square (Claim 4). We combine these squares iteratively (Claim 5) to obtain a single square of side length a​ . Hence we are done. □​

Now that we understand how dissections amongst polygons work, let's consider having hinged dissections, in which the vertices of the pieces are connected to each other in the same way, which would restrict the possible movement of the pieces. For example, while the image in claim 3 immediately allows for a hinged dissection as indicated by the arrows, the images in claim 4 and 5 do not. We present the main ideas, and the proof of these claims is available in the paper.

Given a hinged figure, define the incidence graph which is constructed by placing a vertex at each piece and hinge, and 2 vertices are connected by an edge if one vertex represents a piece and the other represents a hinge on the piece. 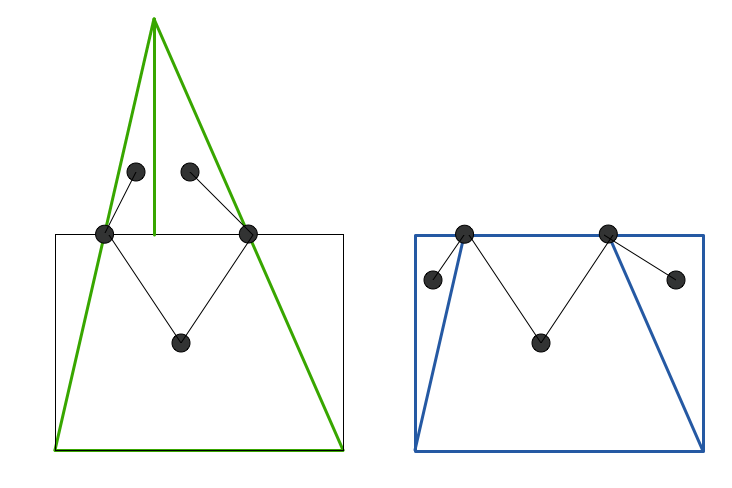 Claim 6. Given a hinged figure, if the incidence graph is a tree F, then for any partition into subtrees A and B, are able to move rooted subtrees using subdivisions and shift A to any part of B to obtain a new incidence graph F′.

Example of how to move along a single edge

Claim 7. Given any hinged figure F, there is a subdivision G such that all valid configurations of G are reachable by a continuous non-self-intersecting motion.

With these ideas, we can prove that hinged dissection of 2 polygons of equal area is possible:

To extend to n polygons for dissection, we can simply overlay the dissections and move the numerous pieces around, as an extension of claim 1.
Unfortunately for hinged dissections, the main challenge is in figuring out a combination technique that works. This can be done using further machinery that refines the idea in claim 6 to more general structures. Complete details are available in the paper.

Interested in geometry? Hinged dissections are pretty advanced, but our Outside the Box Geometry course has some fun problems that will get your creativity flowing.

Whoa, this is really cool... Thanks for posting... I love the graphic!

Calvin, do you know Sam Loyd? In his book, more mathematicals puzzles of Sam Loyd (Volumen ...), there is a problem (1.18). It is possible to cut the "crescent" moon in six parts to form a "perfect" Greek cross.

Ah yes, I love Sam Loyd's books. Back when I was a teenager, I would devour them and very often got stumped on the problems.

Here is the problem from Amazon's preview: 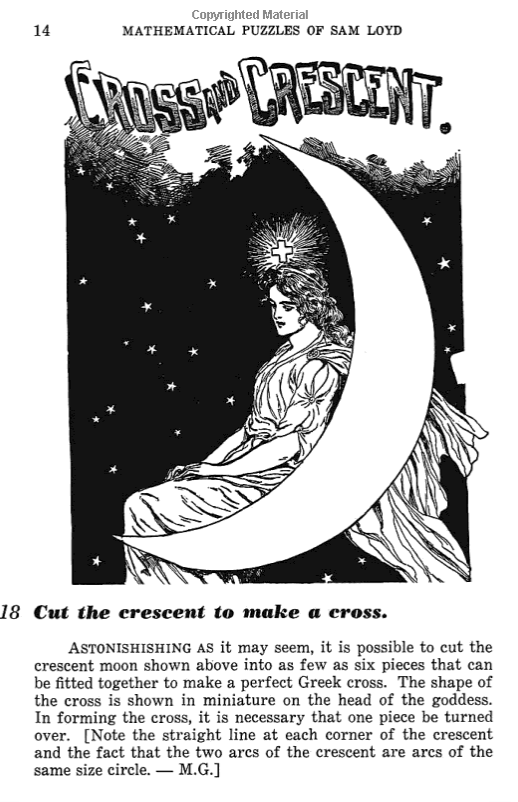 Yes, that is the problem, very good, what do you think about the solution?

@Guillermo Templado – IIRC it was insane. I had no idea how to get it to 6 parts. I managed to do it with a lot of parts, by looking at the tessellation of the cross and of the crescent.

@Calvin Lin – I didn't do it . It was a madness... In your book, do you have the proof? I would made a copy or a picture or a photograph of the proof, but I can't publish it, here. For tessellations and mosaics, I recommend two examples, Escher and Alhambra de Granada .

PS.- If someone likes spanish guitar, listen to this Recuerdos de la Alhambra and the speed of his fingers at the right hand...

The .gif animation above reminds me how Sherlock solves cases using the method of loci.

Just joining the meaningless pieces of the case to one meaningful conclusion.