Recently, I came across a question that required to find the maximum number of regions a circle can be divided into with 4 lines, considering regions fromed inside the circle only. The question was an easy one; a fair bit of trial-and-error popped out the answer as 11. But what if there were, let's say, 100 lines? Obviously, trial-and-error here would drain the soul out of me! So, I started investigating the mechanism that created the maximum number of regions for n lines, and derived a formula which would give us the answer directly.

First of all, I found that when I was trying for the n=4 case, what I was essentialy trying to do is to make sure that every new line I drew cut all the previous lines, thereby forming the maximum regions. To put it in another way, I sought to draw the nth line such that it cut all the previous n−1 lines.

After this realization, I tried to find out the number of regions that were being added after each new line was drawn. For example, when the first line is drawn, 2 regions are formed.

When the second line is drawn, 2 more regions are added to the figure. The regions shaded red are the newly added regions. 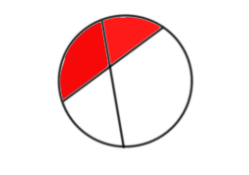 When the third line is drawn cutting the previous 2 lines, 3 more regions are added. 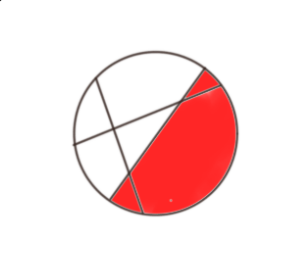 When the fourth line is drawn cutting the previous 3 lines, 4 more regions are formed. 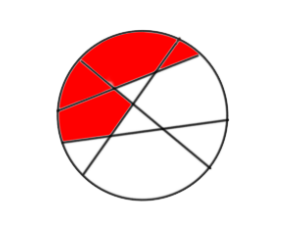 Thus, we have now found out a pattern.

Generalizing, the addition of the nth line results into the formation of n new regions. This is because when you draw the nth line cuting the previous n−1 lines, you add a total of n−1+1=n regions.

This pattern can now be condensed into an Arithmetic Progression whose nth term represents the number of regions that are being added as each new line is drawn.

Note that all terms except the first one are a part of this AP with common difference 1, so we add it separately. The total total number of terms in this AP are n−1. The first term is 2. Apply the formula for the sum of an AP.

I think your table had a slight error. 1st line adds 1 region. (There is one region inside a circle with no lines, the first line splits this in two, so one is added)