Does Light have mass??? Check this article out... 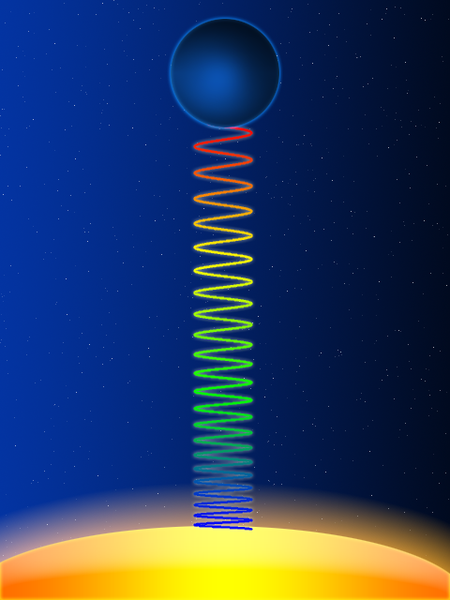 As Einstein said, Matter tells spacetime how to curve, and spacetime tells matter how to move... Light is a quantum particle which is said to have a massless gauge symmetry,Abelian U(1). But Phenomena like curvature of light, radiation pressure and Gravitational redshift requires light to be massive(in my theory(look below for it!!!)). As I thought a while about these phenomena, another question arised.... I found that light is emitted by matter(electrons are the main particles involving in these emissions... I am not sure that protons will emit...).So, if matter are made up of particles, light is surely made up of particles, moreover if light is an electromagnetic wave, light can't travel because electric and magnetic fields are produced only in the vicinity of an electron and also they have limits i.e. these fields can't exist to infinity.

The tertiary thing is gravitational redshift. Many of them are misunderstanding as a consequence of spacetime dilation but what is the reason behind the 'gravitational blueshift?' Again, light have to be massive to fulfill this explanation. Here is where my massive photon theory plays. My explanation is like this... suppose a photon leaves a massive star. Because of the gravitational pull of the star, the photon have to lose its speed. Light can travel only at c(299792458 m/s) so, to maintain that speed, light loses some of its energy to maintain that speed and E=hv where h=planck constant and v=frequency. As there is a decrease in energy, there is a corresponding decrease in its wavelength. This is how redshift occurs. Also gravitational blueshift occurs when a photon is travelling towards a planet. The explanation is the same... due to the gravitational pull of the planet, its speed tend to increase. so, to maintain the speed if light, that energy is given to its wave part i.e. absorb energy. since E=hv, frequency will increase.

Radiation pressure is another one which requires light to have mass. To learn about radiation pressure,[click here] (http://en.wikipedia.com/wiki/Radiation_Pressure) Another thing is that if light goes near a black hole, it loses all its energy to escape, and finally becomes another particle which doesn't have charge, and also can't interact electromagnetically, because all its energy is lost but its mass will always be there. so, it will interact gravitationally. this may be the theory to dark matter.

Thank you for reading this article

No vote yet
22 votes

Sorry but you have many factual errors here.

1) light can be emitted by a large number of physical processes, not just by electrons;

4) Your quoted text is from Wheeler, not Einstein. And thirteen words don't tell you everything there is to know about relativity. "matter" should be replaced by "energy" in that quote. Certainly Wheeler was aware of this; he was making a quip, not publishing a paper.

5) The photon doesn't lose speed due to the pull of the star. Ironically you're forgetting about relativity, the photon travels at the speed of light regardless of how strong gravity is.

And a decrease in energy would correspond to an increase in wavelength (which has nothing to do with mass).

6) if the photon were massive then all of the calculations done on nuclear weapons, the LHC, etc. actually would not agree with experiments.

I haven't said that light travels at c but other experiments about the speed of light shows that some travel at 311,100 km/s, at other times,298,000 km/s and 299,792 km/s in the latest experiments. butc is a constant where the space time difference is zero. it won't change.

sorry, you are mistaken. I have said that instead of losing its speed, it loses its energy equivalent to the energy required to maintain that speed in a gravitational speed.

I'll chime in here since tests of special relativity and the constancy of the speed of light etc. are near and dear to my heart. When we talk about mass physicists mean the rest mass as used in special relativity. You can argue theoretically about why photons don't have a mass, i.e. by requiring the U(1) gauge symmetry, but this would be incorrect. One can construct gauge symmetric theories of the massive photon by applying and old trick called the Stueckelberg trick. A better way to argue that photons don't have mass is to simply check via experiment. Experiments limit the photon mass to <10−50 kg or better, depending on which experiment you like to believe. For comparison, the mass of the electron is around 1020 times larger. Hence one can discuss all one wants, and it's good to talk about these things, but from a practical point of view the mass of the photon is zero.

If photon had no mass, then from where does photon momentum came from?

Radiation pressure has been explained sufficiently well in terms of momentum. You need to clarify not only how your theory is consistent with observations (i.e. show it is equally as powerful as the contemporary theory) but also why your theory is superior and justifies a radical change in physics. It should also be stated that you have only a very general understanding of the theory of general relativity. See the following for more information on the GR theory's take on why the trajectory taken by light is bent in the presence of massive objects: http://en.wikipedia.org/wiki/Geodesicsingeneral_relativity

This gives a short guess about the dark matter. According to the conservation of mass, during interference, all its energy will be converted into dark energy and all other matter part will be converted into dark matter. Dark energy will go on its way and dark matter will go on its own way. Thus a mass is created but no energy(mass itself is energy) of other type(electromagnetism) is created.so it can't have the ability to interact electromagnetically.

If a photon had nonzero "rest" mass, then relativity predicts that it would have a relativistic mass of m=1−c2v2​​m0​​ where plugging in v=c gives m=∞ which is certainly a contradiction.

Now, there are some ways around this. Relativity is not an accurate representation of mere particles and their behavior, but that doesn't mean that what we are saying is not true. For example, the uncertainty principle allows some particles to travel at the speed of light (or even faster) and nothing would be affected.

in the LHC, where protons are travelling at 99.99% speed of light, each proton will attract the earth because of their mass...

You bring up some good questions.

It's equivalent to say 'space is curved' as 'there is gravitational force between the light and the mass'. The maths is the same either way. It could also be described as a configuration of gravitons.

So, then what will be the correct explanation for gravitational lensing?

How will it store energy(Again another flaw in science)? again Einstein said that photon carries momentum. but during interference, all will be lost.but where will the 'momentum' go? or the energy go? notice that , doing so will violate the conservation of energy law. OK. now magnetic fields are the consequences of the electron dipole moments. without an electron, how can it propagate? again, photons are existent.

@Mani Jha – Then, instead of making radiative products, making wireless audio phones which can transmit magnetic fields is better....

@Fahad Shihab – Radio waves are in fact electromagnetic fields. And we already use that wireless technology.

another thing... it is not said that the speed of light is at c but we should measure with the most advanced measurements

So, does photon has its own mass or not generally?

according to me, photons have their own mass. We have to wait for the proof

Einstein stated that two images of one Quasars is formed which is when it's present behind the sun,and hence assumed that the light coming from the Quasars is bent by the gravitational forces of the sun.Correct me if I am wrong ....

Radiation pressure suggests that light has momentum and this does not reflect that it has mass.Does it ??

very nice discussion indeed perhaps it becomes very absurd to answer such a controversial question. it's better to research on what will happen if light has mass. a simple question would be why don't we see light particles?whereas it aids us to see matter. ok if they are subatomic particles then what about it's net momentum on all of us. doesn't it sound strange that matter is presently emerging out from your computers.

now, instead of thinking that light is moving why don't we cosider it as the flow of time, some strange form of energy(rather than matter) that shows time is flowing rectilinearly.hence in a black hole according to Einstein time slows down. thus at the event horizen time apparently stops.therefore, light goes crazy and our math turns out to be eerie. quite weird..................!!!!!!!!!!!!!!!!

Einstein had said that if a photon leaves the atom, then that atom's reduction in mass is equal to the photon's momentum... Now this is strange... Doesn't it seem strange that matter is made of tiny atoms? Doesn't it seem strange that there are many electrons revolving around it? Thus, Every thing in science is only depicted by a model... i.e. only to find a way to calculate fields...

the OPERA experiment shows that neutrinos travel 'faster' than light. Similarly, there will be a large amount of uncertainty in the speed of light...

Time can't interfere in forces. So, light must be a wave-particle. Will time come from matter? as it does in fluorescent tubes?

I haven't said that photons will lose speed.Instead, the photon will lose energy equal to the work done to maintain c

yes light does have mass according to enstien's equation!

Reading the first briefing... i shall tell you that it is energy which is emitted by matter. However, light is a form of energy. Let me read the full note now.

yes and the evidence is......that the light has energy and ( e=mc ) therefore light has mass :D

I haven't said that mine is superior to others' theories... but I want others to see that theories can be written this way...

it is not sure whether the light travels at c. c is the constant where the space-time difference is zero