While I was thinking about this problem, I got an idea: what if the board wasn't flat, but instead spherical? Or cube-shaped? After some trial and error, I was able to come up with answers, and I was able to find one cube-shaped board that seemed to work. Here is the design of the cube: 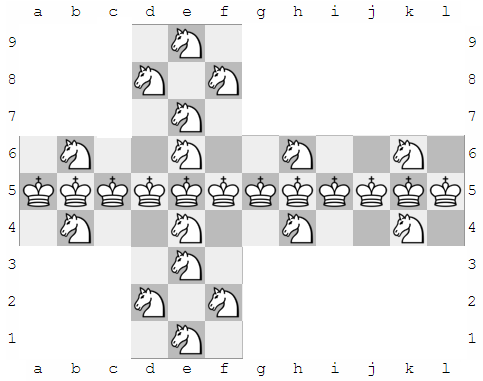 Here is how the pieces move:

All the kings attack all squares that are adjacent to them.

The movements of the knights is like this: they move two steps in one direction, and then 1 step in a perpendicular direction.

I should add Sizheng Chen posted a solution on a torus when we ran the infinite version of the problem for Problem of the Week.

Oh... I wasn't first with coming up with an idea like this...

The cube is new!

@Jason Dyer – The cube idea is very innovative and the solution is quite elegant! I do have a small technical concern regarding the moves for the knights though (just as a general rule in case if we are to explore other cube solutions): as described, this is based on moving two steps in one direction then one step in a perpendicular direction. As a result, the knight on e6 attacks d7 and f7. However, if the knight moves one step in one direction then two steps in a perpendicular direction, the e6 knight would attack c6 and g6 instead. In fact, according to FIDE, "the knight may move to one of the squares nearest to that on which it stands but not on the same rank, file or diagonal." That would make all of d7, f7, c6 and g6 not accessible for the e6 knight. This situation seems to only apply to knights at the corners and the spaces directly adjacent to the corners (not diagonally adjacent), and by no means affect this nice solution.