Flow in stems and pipes I

As we mentioned in the scaling solution, moving sap through the phloem is hard because the fluid can interact with itself. In the next problems, we will treat things in a bit more detail.

The "pipe" we use to model the phloem is actually made of small cylindrical units called sieve cells, which are a kind of hollowed out, nucleus-free, structural cell used for fluid transport in plants. They are very small, on the scale of 100 μm long, and about 20 μm wide. Stacked in end-to-end fashion, they run the entire length of the tree. Fluid flow has a number of odd properties that tend to challenge the usual non-interacting assumptions of classical mechanics. For example, fluid at the center of a pipe flows faster than anywhere else in the pipe. This is interesting, but perhaps intuitive.

What is more surprising is that fluids flowing past a surface will often come to rest with respect to the surface, at the surface. This is known as the "no-slip condition".

In other words, most of the fluid will flow over the surface, but the layer of the fluid closest to the containing boundary will remain stationary with respect to the surface. One explanation for this phenomena is that fluid adhesion to the surface out-competes the cohesive attractions between the atoms of the fluid.

Consider the video below, which shows food coloring used as a tracer to visualize the flow of water past a surface. While the color that is well above from the surface flows quickly to the left, the fluid that is at the surface settles, due to the complete lack of movement. 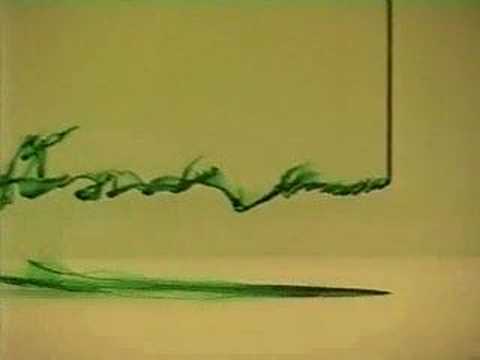 Next, we'll use the intuition developed here to fully solve the behavior of fluid flowing down a pipe, or equivalently, the phloem.