In attempting to solve a community problem posted recently, I derived a formula for the magnetic force between two current-carrying wire segments of arbitrary length (but same for both) and arbitrary spacing. These may well be parts of infinite line segments, but the formula only accounts for the interactions between the two finite segments. The derivation is rather tedious, so I won't post it right now: 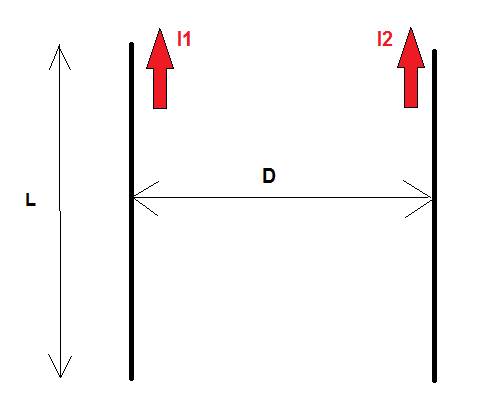 The formula ends up being:

For conductor length much larger than the spacing, the result reduces to:

The second formula is the well-known expression for the force between two long wires, so that's a good sign. I have also confirmed the result with numerical simulations.

Does anybody else know off the top of their head that this is correct?

@Laszlo Mihaly @Ashish Siva What do you think?

yes, I attempted the derivation and obtained the same result. Musn't be a coincidence. ;)

I would calculate the vector potential ( easier than Biot Savart), take the gradient and integrate the force over the length of the other wire. Too busy with real work to do it.