Geometric probability is the idea of looking at probability in terms of lengths, area, or volumes. This technique is useful when the set of possible outcomes is infinite and we are unable to use the formula

The following problem illustrates why this is useful and important.

A point is chosen uniformly at random on the real line in the interval (0,3). What is the probability that the chosen point is closer to the point 0 than it is to the point 1?

Solution: It’s pretty easy to see that a point in this interval will be closer to 0 than it is to 1 if the point is less than 21​. So what does that make the probability? Tricks that we can use with finite sets don’t work here. For example, I can map the interval (0,.5) to the interval (.5,3) by the function f(x)=5x+.5. In the finite case, given this bijection, we would say that the events are equally likely. Does this then mean that the probability is 21​?

The problem here is that we are working with sets of infinite cardinality, and so we cannot use the ideas of finite sets to help us. What we can do is compare the “areas” of the sets to get the correct answer. The area of our target interval (since we are in one dimension, the area is the length) is 0.5, and the area of our whole interval is 3, so the probability that a point is in the target interval is 30.5​=61​.

We will do a few more examples on working with geometric probabilities in higher dimensions to get a better feel for how to work with the concept. It is often helpful to use a figure to help with understanding and solving these types of problems.

1. A toothpicked is dropped to the floor and it breaks in two places, creating three pieces. The position of the breaks are uniformly random along the entire length of the toothpick. What is the probability that these 3 pieces can form a triangle?

We can parameterize the toothpick along its length from 0 to 1. Let x be the position of the first break and y be the position of the second break. We have two possibilities, either x<y or y<x. We need not consider x=y, since the question states the toothpick was broken into three pieces. However, even if this was not stated, we do not need to consider x=y, since the probability of this happening is 0.

Let us first consider the case when x<y. For the three pieces to form a triangle, the length of the longest pieces must be at most 0.5, so that the three pieces will satisfy the triangle inequality. For this to occur, we must have x<.5, y−x<.5 and y>0.5. We can plot these in two dimensions on the xy-plane. 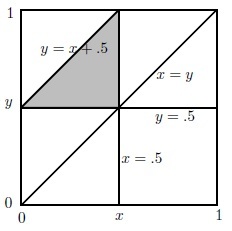 The shaded area is the area that satisfies all three of the constraints. If we consider the case where y<x, we will get the same things reflected along the line y=x. The total area of the square is 1, and the sum of the areas of the two small triangles is 41​, so the probability is 41​.

2. A point is chosen uniformly at random from the interior of a sphere. What is the probability that it is closer to center of the sphere than it is to the surface of the sphere?

3. A square S has side length 30. A standard 20-sided die is rolled, and a square t is constructed inside S with side length equal to the roll. Then, a dart is thrown and lands randomly somewhere inside square S. What is the probability that the dart also lands inside square T?

The difficulty associated with geometric probability usually comes from one of two areas, the first is finding a good way to model the problem geometrically, and the second is in trying to determine the areas/volumes of particular regions in order to calculate the relative probabilities. As in finite probability, it is sometimes simpler to find the probability of the complement.