This is Calvin Lin's current status:

Gödel has proved it that there is no logical foundation of Mathematics. Discuss.

Let me get the ball rolling

Godel's incompleteness theorem explains that there are inherent limitations in mathematical structure. In particular, it shows that there is no proof which demonstrates that arithmetic is consistent.

The first incompleteness theorem states that no consistent system of axioms whose theorems can be listed by an "effective procedure" (e.g., a computer program, but it could be any sort of algorithm) is capable of proving all truths about the relations of the natural numbers (arithmetic). For any such system, there will always be statements about the natural numbers that are true, but that are unprovable within the system.

Food for thought: If we were asked to prove a given statement, but are unable to do so after an extended period of time, is it possible that the statement is unprovable?

Food for thought: If we were asked to prove a given statement, but are unable to do so after an extended period of time, is it possible that we do not know if the statement is unprovable?

@Calvin Lin I have some questions as well.

(1) Does a statement have to be either true or false?

(2) If we prove that a statement A can not be false, is it okay to say that we've proved A to be true?

We do that all the time, don't we? When we prove that 2​ is irrational, we show that the assumption that 2​ is a rational number leads to a contradiction and therefore 2​ can not be rational.

Finally the most important question:

(3) What is wrong with the following reasoning?

From what I understand about the incompleteness theorems, the first theorem is proved by constructing a 'Gödel Sentence', G, which goes along the way of "This statement is unprovable given this set of axioms". Now this statement can't be false because that would cause a paradox. In other words, it is impossible for G to be false. Now if the answer to question (2) is yes, then doesn't it mean that we've proved G to be true? But that would lead to a paradox as well! So, G is neither true nor false, very much like the statement in question (1).

So is there anything wrong with this reasoning? I should add that I don't have much background on the incompleteness theorems, so I could be wrong.

I'd suppose, I'd agree with both of those questions. Either that or with the current level of our mathematics, we can't seem to prove something. Or perhaps we might require to change some definitions of things to prove them. Hmm...

Oh, this has just been reshared. Well, let me jump right in. Godel's Incompleness Theorems is a popular subject of discussion, but what's not mentioned often enough is the connection with Turing's Halting Problem. For people familiar with computer programming, it might be easier to understand the former in terms of the latter. Anyone who has done programming knows how easily it happens for a program that hasn't been debugged to "get stuck in some kind of an endless loop", forcing a reboot. It's not true that programs that crash do so because it's in an endless loop, but what can happen is that the program never halts, and we have no idea if it ever will. Turing was the first to prove that there exists no algorithm or systematic method of determining whether or not any given code would not suffer from this, thus condemning generations of programmers to the everlasting worry that their code may fail. Numerous programming techniques and restrictions on how code may be written and compiled have been advanced to "stay within the box of coding that are known not to suffer from this halting problem". The analogy here in mathematics is that mathematicians work to identify theorems that are proven, or problems that are known to have solutions (but yet found). But unfortunately, just as with programmers not having that confidence in arbitrarily written coding won't fail, mathematicians have to live with the reality that there are many conjectures, the proofs of which may "never halt", i.e., not determinable in a finite time.

However, to make the claim, "There are no logical foundation of Mathematics" is throwing the baby out with the bathwater. Just as modern programmers have to work with coding principles and restrictions to avoid the halting problems, mathematicians simply have to accept that there is a smaller subset of "all possible conjectures" that either have proofs or at least not shown to be undecidable, that make for the mathematics we have and can use, and relegate the rest to the Oort Cloud of undecidables. There's still a practical, useful mathematics, and there's a foundation for it, within that limited sphere. It had been an illusion to begin with that any utterable conjecture necessarily is either true or false (the Law of Excluded Middle---which had to be made an AXIOM), so now, as with the discovery of Non-Euclidean Geometry and its utility, we have a wider, and perhaps richer understanding of mathematics, one that affords more possibilities, not less.

This makes me think of the Euclid's Elements, and his 5 axioms. 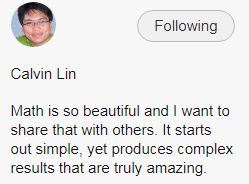 I've had this on a math test.

The answer is 10 because the entire question was written in base 2, including the part that told you what the base was. I was really happy when I got that. (It was extra credit)

Not really, what it refers to is the fact that you must take certain things on faith, you can't prove it i.e. axioms. When changing bases arithmetic is still consistent, you can do any calculation in any base and still get the same answer, just in a different base. 1+1=10 in base 2, however 10 in base 2 equals 2 in base 10, you still get the same answer, but it just "looks" different because they are in different bases.

Principia Mathematica says "The above proposition is occasionally useful." when referring to that equation.

Yeah...... I saw a mind blowing proof somewhere on this site!

There is a proof that 1=2, but it's rather faulty.