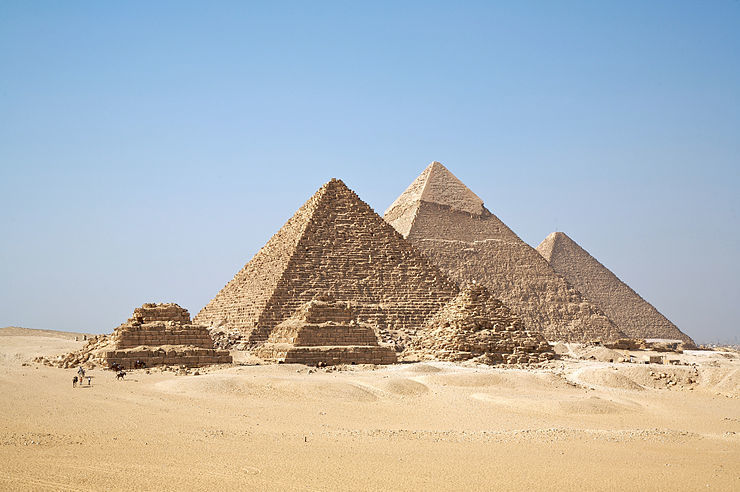 The pyramids of Giza have many interesting facts that were impossible to be in this time ago unless there was something like a miracle or something else we do not know -you can surf the net to know these amazing facts- what are your opinions?

People 4,500 years ago quarried these stones, floated them down the river, and moved them into place to build the pyramids. Yes, they really did do that, just like Americans actually landed on the moon, and Mayans actually figured out how to predict solar eclipses. No aliens or hoaxes necessary.

In 55 BC, Julius Caesar had his army build a bridge across the Rhine River (upwards of 1300 feet long) in which to raid Germania. They built it in just TEN DAYS. Even engineers today have trouble building a bridge that fast across a much smaller river, using modern equipment. Aliens or a hoax? Neither.

Peoples have always imagined that "peoples of past history" were particularly stupid. The Egyptians, Mayans, and Romans thousands of years ago didn't have smart phones, so what could they have accomplished? Well, since they didn't spend all day staring at a smart phone in front of them, maybe they had time to figure out how to actually build pyramids, complex calendars, and massive trestle bridges. Not to mention landing men on the moon.

And indians built an iron pillar which does not rust.

I heard about that too. Having worked with cast iron during the days I had a machine shop, I can believe it.

i am with you . they have spent thier time working not playing so they reached a high standard of knowledge more than us .

I have two ideas I would like to share. 1. Strength was an essential need in the past, therefore everyone was strong that wanted to survive. In the modern world, strength has it's place, but isn't necessary. 2. The stones used to build the pyramids, were carved/molded in its place, and never moved. (That is purely theory, and should not be taken literally.)

i am with you that they were strong enough .,,, but i do not think that it was carved in its place as pyramids are built of stones over stones ,,, so i think they used science to reduce strength needed for that .

That's a perfectly logical belief, I just don't understand the alien theory, or anything related.

Many assume that this was a work of Aliens. Infact, these complex construction was not possible without the help of modern machines. This is a controversial topic though. Each one has their own predictions.