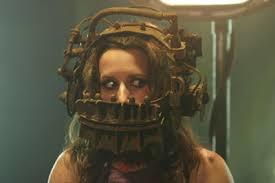 Jigsaw has captured Albert Einstein,he is in an empty cylindrical tank which is 10ft in depth.There are 2 keys attached to the top of the tank (meaning the center of the lid).He has to escape out of the tank within 1 min or else the tank will burst into flames (the tank is fixed with 50 kg of explosives and a timer) He is fixed with a Reverse Bear Trap (can google it to find how amazing it is), one of the key hanging from the lid will free him from the Reverse Bear Trap and the other to open the bottom of the tank to escape from the tank.As soon as he opens the bottom lid of the tank the timer on the explosives will stop. There is nothing in the tank except a water inlet tap (which is fixed at the bottom of the tank)which releases water at a great speed.

Albert being an intelligent physicist escapes from the trap,How did he do it??? This not any TRICK PROBLEM OR LOGICAL THINKING it is an application of Physics.

The radius of the tank is not so small for him to use it to reach there.

He has to take both the keys from the top to stay alive.

The inlet tap can fill only half of the tank ( STILL NOT SUFFICIENT TO REACH THE TOP,EVEN IF HE STRETCHES HIS ARMS OR JUMPS ONCE)

Note by Anirudha Nayak
7 years ago

Sorry I couldn't understand either the question nor your solution...

I understood it. Technically speaking, it isn't standing waves, he just uses resonance principle by just giving the force on the water when the surface waves are at the positive peak. But its AWESOME!!!

I will give the answer TOMORROW