Look at how much Brilliant has grown 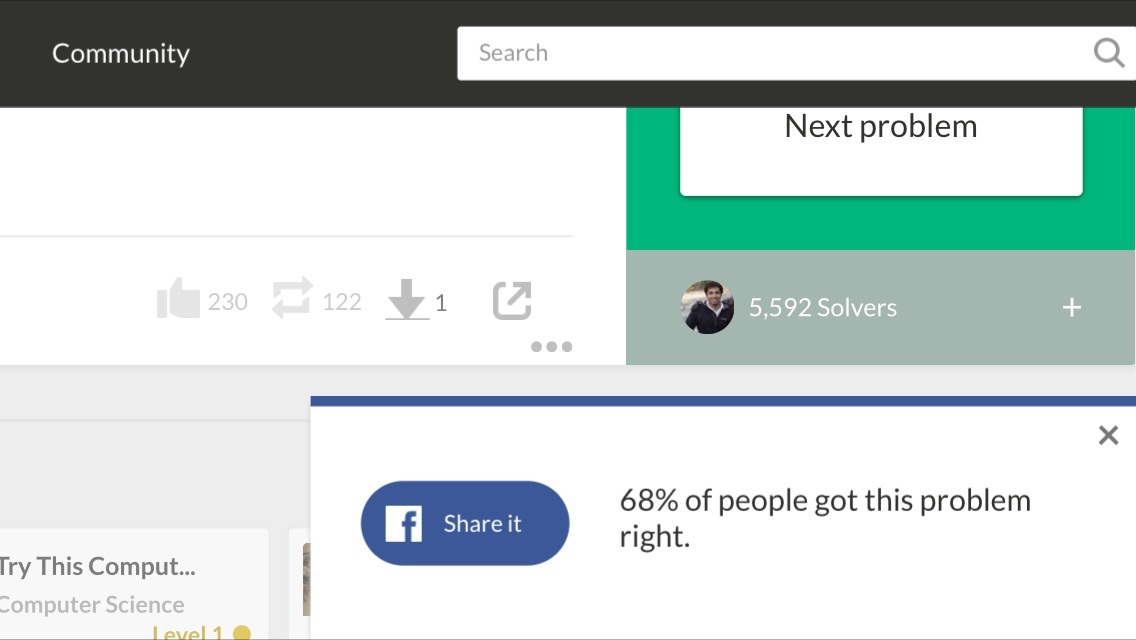 above: my problem from a while ago

below: my more recent problem. 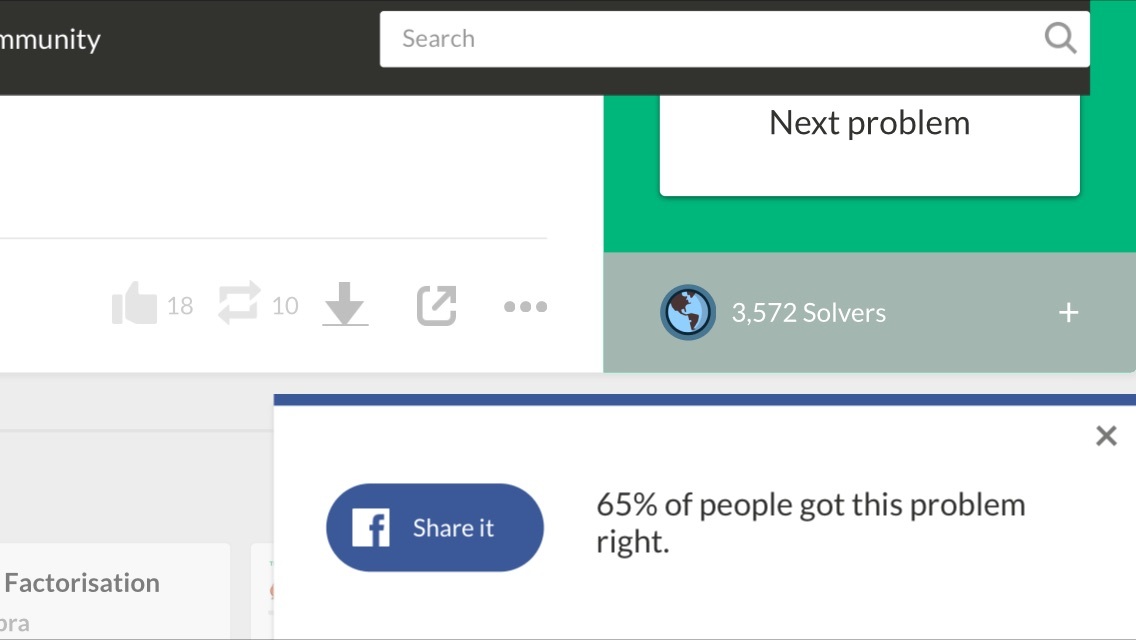 So the other day, someone reshared my problem from a little while ago, probably about just over a month. When I checked the number of views, it was at 5000! With only 10 Reshares!

My most popular problem, which I posted atleast 5 months ago, (I can't remember, it's been a long time) has 120 ish reshares, and 8500 views. In 1/5 the time, with 1/12 the reshares, the problem which I posted more recently got over half as many views as my problem from a while ago.

Keep it up Brilliant!

Note by Trevor Arashiro
6 years ago

That's an interesting metric to use for comparison. The problems appear to be of comparable difficulty, so we can't use that variable to explain away the remarkable difference in the solver-to-reshare ratio. The like-to-reshare ratio is comparable as well. Brilliant is going strong, and deservedly so, but there is also the "Calvin Effect" to consider, i.e., when Calvin Lin, with his zillion-and-one followers, reshares a problem, it essentially goes viral. To paraphrase Orwell, all reshares are equal, but some are more equal than others. So there's a chance the more recent question benefitted from this phenomenon......

Geez Louise, I can be way too objective, (euphemism for skeptical), for my own good, huh?! However, now that you've made this observation I have yet another indicator to keep my eye on. Thanks for that, Trevor. :P

And yes, I concur: Keep it up Brilliant!

We try and set things up so that if you write a great problem that interests people, then more people will see it and like it. Also, sometimes problems go viral outside of Brilliant.

I also remember the time when you had 2000 followers, and that was considered a huge amount. This tells us that over the past 6 months or so, Brilliant audience has essentially multiplied by a factor of 5.

Anyways I'll always have half as many followers as you do... not sure if that's something to be happy about or sad about though.

@Daniel Liu – I'd say you should feel pretty happy about that. You must have the most followers of any non-staff member; impressive. With over 150 problems posted, 300 solutions written, 2000 problems solved and 4800 followers you are sort of the LeBron James of Brilliant. :)

@Brian Charlesworth – However it didn't really feel like I tried any more harder than any other ambitious Brilliantian. I was just at the right place at the right time. Kind of like Pewdiepie with his #1 most subscribed on Youtube achievement, I guess. But yea, I should feel really happy about this, and I am ⌣¨

@Daniel Liu – I must be the only person on the planet that didn't know about Pewdiepie. 33.7 million subscribers.... wow. And that was both the first and the last time I'm going to visit that channel. Your achievement is far more substantive. :)

Haha. Wait, doesn't it go "ones, tens, hundreds, thousands, zillions"? :) Exaggerations aside, I can see you having 100,001 followers by 2020. That would represent an exponential rate of growth of about r=0.46, which doesn't seem too far-fetched.

The "facebook Effect" is another major factor, particularly for lower level problems. For example, for one level 1 problem that I posted a solution for about 4 months ago, when it was featured on the Brilliant facebook page the numbers of solvers, likes and upvotes took off like a rocket. It now has 133 likes, 73 reshares and 7009 solvers, with a 45% solve rate. This seems more in line with the first question Trevor mentions, but there is still so much variation between the three I don't know what conclusions can be made, other than that there has been a lot of activity the last few months. I've seen a few of my higher level problems featured on facebook and through e-mails, and although there was a noticeable boost in the counts it was modest by comparison with the likes of the question noted above.

Why did you tag it with #easymoney??

I hashtag all my posts with #easymoney

This is so that if I want to see explicitly my posts and my friends posts (not the problems we reshare) we just type #easymoney into the search box and we get all the results, since no one else uses it.