Mathematics Behind The Cryptography And It's Basic Principles--2

Symmetric cryptography is the most widely used form of cryptography. It can be used to secure communication by two or more parties and relies on a secret that is shared between the parties. Symmetric key algorithms are a fast way to securely encrypt data using a shared secret. The two most commonly used algorithms to date are Triple DES and AES.

Block ciphers– these operate on groups of bits called blocks; a block cipher typically has a fixed block size that is a multiple of 8 bits (common block sizes are 64 bits and 128 bits)

Stream ciphers– These operate on single bits of data.

A symmetric key algorithm is called ‘symmetric because the same key is used in both the encryption as well as the decryption operation.Given a good symmetric key algorithm the security depends on the shared secret key remaining secret. Once the key has been disclosed, any eavesdropper can decrypt the message traffic between the communicating parties.The security of block ciphers depends on the ability of the algorithm to create an output that is indistinguishable from truly random data and on the randomness of the key.

The big disadvantage of stream ciphers is that their security is heavily dependent on the quality of the pseudo random number generator that generates the key stream. A number of stream ciphers (including – for instance – RC4, which was used for SSL and Wi-Fi WEP encryption) have been broken because of this.

There are Many Algorithms Of Symmetric cryptography . Some Of Them Are Explained Bellow :

The random data used to encrypt may only be used once (hence the ‘one-time’ in the name). Traditionally this random information was stored on pieces of paper (hence the word ‘pad’ in the name).The one-time pad data is often used to encrypt the plain text using a simple binary exclusive-or (XOR)operation; this yields the cipher text. The advantage of using the exclusive-or operation is that it is a native instruction on almost all computer systems and operates very efficiently.The receiving party uses the same one-time pad data to perform the XOR operation on the cipher text, which will yield the plain text.The workings of one-time pads are depicted in Figure below:

The Data Encryption Standard (DES) was developed by IBM and the NSAin the United States. DES is also commonly referred to as the Data Encryption Algorithm (DEA). The original DES algorithm uses 64-bit keys, but because some of the key bits are used for key integrity checks only 56 bits are actuallyused for the encryption/decryption of data. This variant of the DES algorithm is now obsolete and should no longer be used. It is considered to be insecure for most applications. The standard has been withdrawn by NIST and a 1999 joint effort between the Electronic Frontier Foundation and distributed.net demonstrated that it is possible to break a DES key through brute force in just over 22 hours (given Moore’s Law, this can be done much faster by now).

The more popular and widely adopted symmetric encryption algorithm likely to be encountered nowadays is the Advanced Encryption Standard (AES). It is found at least six time faster than triple DES.

A replacement for DES was needed as its key size was too small. With increasing computing power, it was considered vulnerable against exhaustive key search attack. Triple DES was designed to overcome this drawback but it was found slow.

The features of AES are as follows −

For Designing AES, we restrict to description of a typical round of AES encryption. Each round comprise of four sub-processes. The first round process is depicted below : 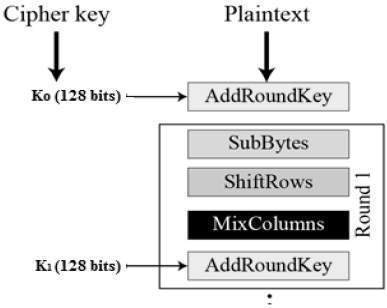 The 16 input bytes are substituted by looking up a fixed table (S-box) given in design. The result is in a matrix of four rows and four columns.

Each of the four rows of the matrix is shifted to the left. Any entries that ‘fall off’ are re-inserted on the right side of row. Shift is carried out as follows −

Each column of four bytes is now transformed using a special mathematical function. This function takes as input the four bytes of one column and outputs four completely new bytes, which replace the original column. The result is another new matrix consisting of 16 new bytes. It should be noted that this step is not performed in the last round.

The 16 bytes of the matrix are now considered as 128 bits and are XORed to the 128 bits of the round key. If this is the last round then the output is the ciphertext. Otherwise, the resulting 128 bits are interpreted as 16 bytes and we begin another similar round.

Since sub-processes in each round are in reverse manner, unlike for a Feistel Cipher, the encryption and decryption algorithms needs to be separately implemented, although they are very closely related.