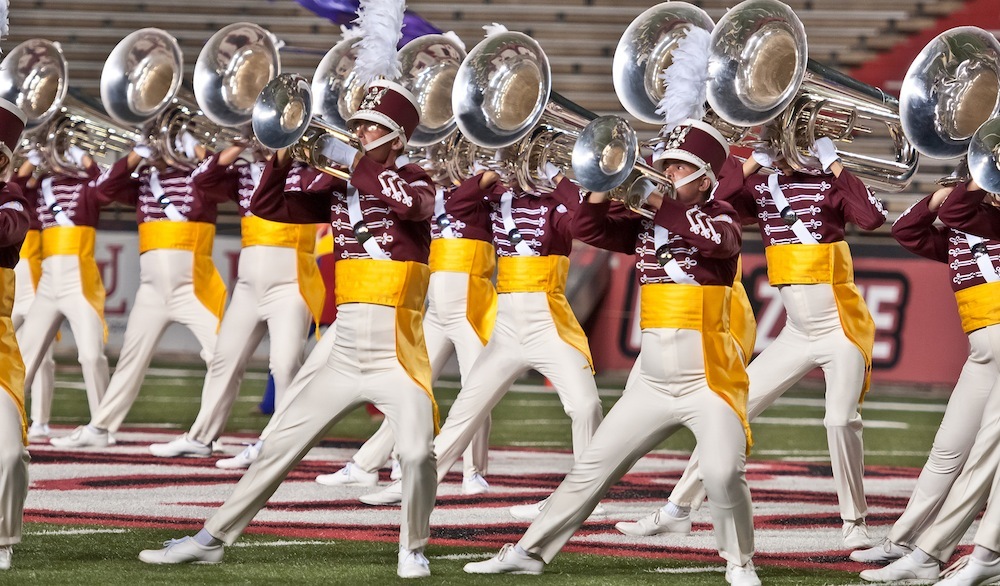 It's no secret that mathematics and music go hand in hand. Frequencies, subdivisions, tempos; it all comes back to mathematics. One of my favorite intersections of mathematics and music is predominantly an American activity: drum corps. A drum corps, for those of you who are unfamiliar with this activity, consists of 100 or so members. There are trumpets, mellophones, baritones, tubas, a large percussion section, and a color guard. These members run around the field playing extremely difficult and entertaining music. The color guard tosses rifles into the air at heights of around 25 feet an catches them with ease! It's a huge step up from the traditional marching band; it's faster, louder, requires true athleticism, and it draws crowds in by the thousands night after night in the summer.

The most mathematical part about drum corps, however, is the drill, or the sets of movements that all the members make. Visual artists from each corps draw inspiration from geometry, especially symmetry. There have been some truly phenomenal shows with delightfully mathematical drill. I'll share some links below to some of my favorites!

Here are a few really cool drum corps shows y'all should check out:

Being a percussionist, I'm a big fan of The Blue Devils, so I'm glad there's a fellow fan amongst us.

20th century classical music (Iannis Xenakis' is the most prominent and relevant example) has maths very heavily involved. I play the timpanis; some parts for timpani have a nice structural symmetry to them. I also listen to lots of IDM: Aphex Twin, Squarepusher, and Venetian Snares all have pretty technical tracks to their names.

Xenakis definitely comes to mind when I think of math and music! Great stuff.

Do you listen to any Steve Reich or John Adams? They're my idols; just made a remix of Different Trains. I don't enjoy Philip Glass or Arvo Part though, their minimalism feels a bit dry.

Also, have you watched any talks by Terry Tao? He describes the PNT poetically as listening to the music of the primes; the von Mangoldt function is "noisy" as primes and "silent" at others, and after subjecting the function to the Mellin transform, notes arise from the function. Some notes can never appear in the music; this is the PNT.

What about aleatoric/stochastic music? What about music in free time? Listen to a bit of John Cage's works or Terry Riley's In C, you'll see what I mean.

Succeeding composers like Wagner, Debussy, Ravel, and Mussorgsky who brought about a revolution in sound (melody, timbre, structure, etc), the emancipation of dissonance in the 20th century threw that symmetry out of the window entirely. Go listen to Schoenberg, Ives, Messiaen, Ligeti, or Bartok.