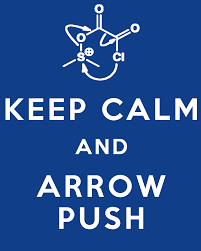 The second challenge of what might become a weekly segment.

Account for the stereochemistry in your mechanism. A mechanism can be either hand drawn or made using an online web tool. An answer will be provided in 72 hours (or earlier) if no one can provide a suitable mechanism.

Consider the reactant, it contains two oxygen atoms (a great target for TiCl4​). We encounter the first question : Which one does it choose? 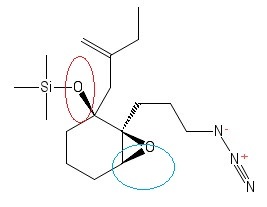 The oxygen atom (circled in blue) is much more open to attack when compared to the other (circled in red) which is bonded to a bulky silane group. With the first question out of the way we draw the first precursor : 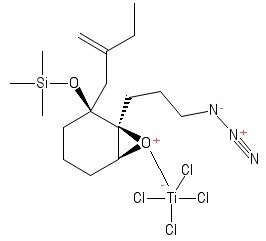 The next step is quite simple, Silicon has a greater affinity for chlorine than titanium, however the Oxygen atom (circled in red) stopped it from reacting with it. Now that a charged system exists in the lower half, a chloride transfer occurs. This also helps in increasing the bond strength between Titanium and Oxygen (in blue) because of Titanium's increased Lewis acidity. 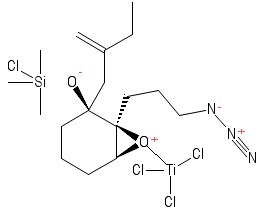 Again, the structure of the second precursor makes it evident to the reader. The negative charge shifts to form a carbonyl group. During the process the allyl system shifts and attacks the weakened epoxide system in an SN​2 manner to generate the third precursor : 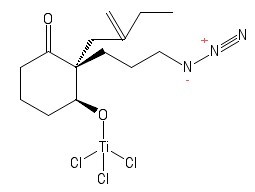 The next step is hydrolysis. Before we continue with the organic reaction we mustn't forget about by-products. The following side reaction occurs because SiMe3​ is much smaller than the organic substrate:

With the aqueous hydrochloric acid, the Titanium substrate is removed. The molecule has been rotated using an axis parallel to the plane of the screen: 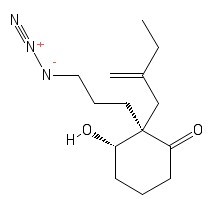 Again, don't forget about the by-products. This side reaction occurs simultaneously with the organic reaction given below. 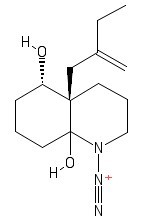 A keen reader would now realise that the next step is the final one. The "carbonyl" oxygen atom pushes it's electrons back into the system to shift the bridging bond to the nitrogen atom. To complete its octet it expels thermodynamically stable nitrogen gas.

When redrawn we see that the stereochemistry has been accounted for in the mechanism. 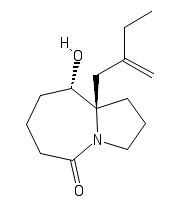 Nice one!! I missed the fact that the azide ion will not get hydrolysed, and ended up with a different mechanism

woah ! that's not easy ! at first glance i knew that ticl4 was gonna attack blue O, and also knew about tmso as i have earlier studied the tms group while studying the back bonding and exceptional hybridisation in tms(amine) (it aroused my interest in the tms group) ,but it's stereochemistry that's over my head !

Bro! @Vitthal Yellambalse we are confined with syllabus of JOE ADVANCED , so we don't seem to know every reagent and mechanisms but we would like to try ....

You can help us by mentioning some of the different names of the reactions and cyclisations that we may learn 1st ( If we don't know and then apply!) That are part of this mechanism .

I understood that. That's why this particular problem contains reactions that do not exceed the JEE advanced level. If it still seems difficult here is a hint : TiCl4​ is a catalyst and TMS is SiMe3​.

So that give me confidence that this dont contain high level stuff so now i can try it :)

@Aniket Sanghi – The stereochemistry is bothering me :(

@Sumanth R Hegde – You are very close. The only issue is that there is no nitrene intermediate and that hydrolysis occurs much before than you think.

This time I could take care of the Stereochemistry Hopefully I am closer now :p

@Sumanth R Hegde – Think again, you are getting really close now. Remember that TiCl4​ is a catalyst.

@Vitthal Yellambalse – Hmm I think I get your point. I have made a few corrections here and there .

@Sumanth R Hegde – The first half of your mechanism is spot on, but both the initial and edited second halves are not correct.

@Vitthal Yellambalse – Will think again and let you know :p

@Sumanth R Hegde – Just don't take too long. I will post the answer in 11 hours and 38 minutes.

@Vitthal Yellambalse – I have edited my mechanism. This looks much better than my initial mechanism :p . Although i havent changed the way the stereochemistry is accoounted for.