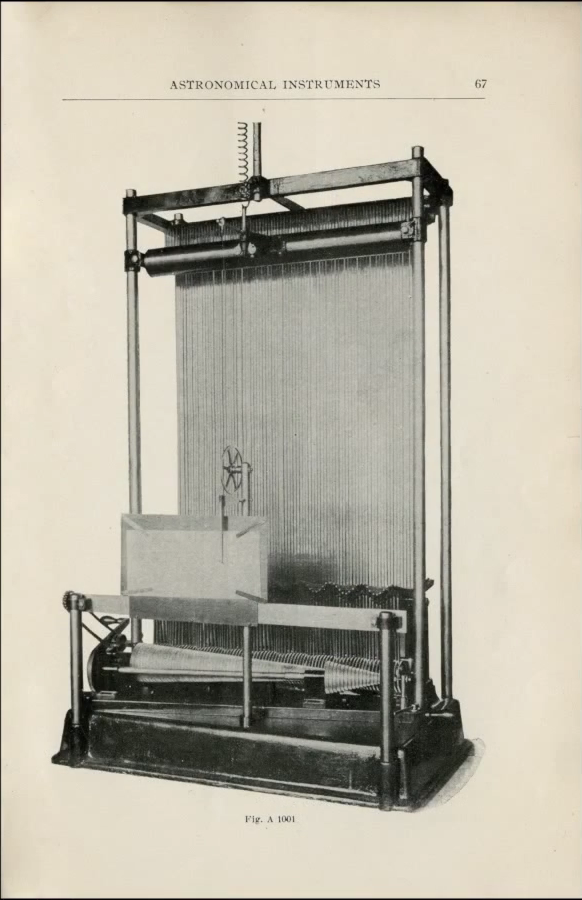 It is fascinating that Albert Michelson (who accurately measured the speed of light in 1887) invented such an intricate device to perform Fourier analysis. Only a handful of the Harmonic Analyzer were ever fabricated and sold between 1900 to 1910. Check out this four-part series of videos:

I just watched the intro, will watch the rest.

But, I don't know what a Harmonic Analyzer is and also don't know about Fourier Analysis.

Still will try to get the general outline ;)

Math Philic, it can't be overstated how important Fourier Analysis is in mathematics, physics, and engineering. As a simple example, consider a single musical note, say, middle A, played by a number of different musical instruments. That note will sound different as played by each, because almost all of them will mix other frequencies in addition to the "pure" sinusoidal middle A note. This is what gives the different musical instruments their character, why a trumpet sounds different from a violin, and why the two sound different from a piano, etc. Well, given an output reading, how can we determine the contributions of each of the "extra" sound frequencies? Modern computerized Fourier Analysis will do that for you, but in Michelson's day, doing it by hand was extremely laborious, and he was interested in both acoustics and optics. Hence, his machine. You mechanically plug in the shape of the periodic function to be analyzed, say, a square wave, his machine will then give you a frequency breakdown. And to check the result, this can be done in reverse, you plug in the amplitudes of the frequency components, his machine will then give you the sum. Going either way is called "doing a Fourier Transform". So many things make use of Fourier Transform that it's mind boggling how broad the applicability is---from medical MRIs to analyzing the internal structure of our sun.

Even if you don't investigate Michelson's Harmonic Analyzer, it's worth it to have a look at "Fourier Analysis and Transform"---if you expect to be informed about mathematics. Don't miss it.

I can relate some stuffs like 'interference of waves' and 'waveform', etc. from high school physics.

Thanks @Michael Mendrin . Now, Michelson's Harmonic Analyzer makes a bit more sense than before to me. As for Fourier Analysis should I understand it thoroughly? like I must-be-able-to-apply-them type?

Would you mind if I just asked something more, which may be I shouldn't. So I am attempting your this problem. After reading it at the first time. I was like in the equation y2=4ax where do we have 5 parameter? and the question has 5 conditions(the five points). I knew I was missing something. I wrote the problem in my notebook and went to refer materials related to parabola to revise it. Then I recalled the general equation of conics , which indeed requires 5 parameters to be determined uniquely. Then it will be like 5 equation and five unknown. BUT the problem is of level 5 and has got very high rating 300+. I am like it can't be so. There could be implicit conditions like lines through a some points could be tangent to it or so. Please give me some hints like whether I am going in the correct direction or not. like a Yes or a No. I have solved very very few level 5 prblm, I am just excited that atleast I am able to make something of a problem of that level.

If u think it will be unfair, don't mind leave it. I m going to click 'reveal solutions' soon :D. d Only thing I needed was a sign. :p

@Soumo Mukherjee – I've never seen this face? What is it called?

@Steven Zheng – I don't know its name. May be if you image search 'meme faces' or 'troll faces' you will probably get one ;)