I saw this video going around of engineering students at their graduation from MIT who were unable to power a light bulb using a battery and a single wire:

It is surprising that the engineers would have trouble rigging up the circuit. Let's take a look at the problem and see what this episode can teach us about effective learning.

The solution: Back to the basics of electricity

A conventional lightbulb has two terminals—one at the base and another at the threads of the bulb. If these two terminals are kept at differing voltages, current will flow across the bulb, causing the filament to glow.

The obvious way to close the circuit and light the bulb is to use two wires:

While the setup with one wire appears to be different, it is actually the same. We can see this by drawing a diagram. 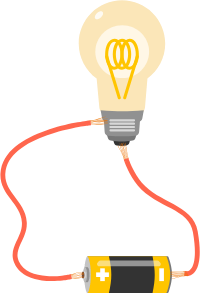 Let’s ask ourselves a simple question: what is a wire? The answer is: a tool to connect two components of an electrical circuit. This is all the insight we need to close the circuit with one wire.

Case 2: Closing the circuit with one wire

Looking at the battery and the light bulb, it's clear that we can touch one of the terminals of the battery directly to the threads of the bulb.

Thus, we can eliminate one of the wires without incident. 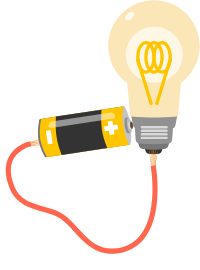 You may have noticed this isn't the only way to close the circuit. In fact, there are three other arrangements that will work. While the bulb requires a voltage across its terminals, it doesn't care about the polarity.

So, we could also do the following: 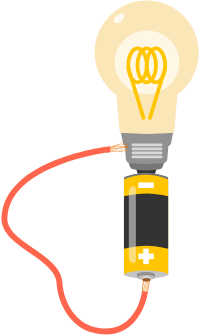 The simple lesson is: if there's a way to make two circuit components touch without using a wire, we don't need to.

A hazard of higher learning: Losing the basics

Those students probably all knew how lightbulbs, circuits, and batteries worked. However, they also probably spent the last several years of college in upper division classes that focused on abstraction and theory. When confronted with the basics, they no longer recognized where the lightbulb and the battery fit into their skill set and knowledge base. This is not a problem unique to MIT or elite academia. Losing track of the basics is an innate hazard of learning a lot very quickly.

In any field that you find yourself in, you can protect yourself from a future light bulb + battery moment by laying your foundational knowledge in the firm understanding of simple cases. If you have a sound understanding of the fundamentals in your discipline, you will always be able to derive more sophisticated ideas from the basics. Conversely, it's extremely hard to rediscover the fundamentals from merely remembering the wealth of fancy results of your field of study. In other words, when you get lost… go back to the basics.

Want more like this? Check out the Physics of the Everyday course.

Note by Josh Silverman
4 years ago

Apparently, these Harvard grads haven't ever taken a flashlight apart. I mean, how many times have I had to take apart a flashlight because the battery wasn't making a good connection with the bottom of the bulb?

Then again, maybe they don't make flashlights like that any more. Maybe it's all done with Wi-Fi.

I didn't think of this. The flashlight definitely raises the stakes.

Well you people should see India I guess then.Here from grade 8 onwards students know only 1 word...JEE.Just mug up huge books for 5 years just the sake of those 6 hours.By the time they reach IIT...they forget how to ride a bicycle.

It is vital that there be practical/vocational training for students. I am from Afghanistan and most 5 year old kids there would be able to achieve this because they have played around with batteries and bulbs. I remember a Big Bang Theory episode where Howard was asked if he knew about internal combustion engines and he said something along the lines of "Yeah, I am an Engineer" but couldn't fix one. I would think practical portion of the field is just as important as the theory when teaching!

This is gold. Imagine being able to do pages and pages of physics problems and practice tests to end up not knowing how to light up a bulb🤣

I know right. These people probably haven't touched physical objects other than books and pens in years lol

@Krishna Karthik – I know, they must feel like they wasted their life after this. And to think that this can be done by 5th graders...Its embarassing...

@Percy Jackson – And to think that these are the people that are training to design the most complicated electrical systems in the world...

However, that being said, the hardest part is learning the mathematical aspect of the engineering. The practical aspect is much easier. But still; it's surprising that their conceptual understanding is so poor.

@Percy Jackson – Murphy's Law? I remember that from Interstellar lol.

@Krishna Karthik – LOL, ya it says that whatever can go wrong, will go wrong. I just tried to disprove it, but can't seem to be sure of it.

@Percy Jackson – It's just an adage. It isn't objective.

@Krishna Karthik – Yes, but it is interesting nonetheless...

@Percy Jackson – Yeah; of course. Many people know about Murphy's law; it'll be interesting to disprove different cases of it.

@Krishna Karthik – Yes. When something goes wrong, lots of people in my school used to be like, "Damn, Murphy's Law". The ones who knew about it anywway lol

Engineering is about creating and most of the universities produce scientists and not engineers .Its an initiative u take upon yourself and do it

You can see the guys spent time in vain at the university, since they can't do such an elementary task..... It directly shows the status of the university and students' interest....

Are you talking about me ?

You can clearly see that there are zero problems solved, and zero activity, except that comment below to promote writix. Well, the "guy above" wasn't a good choice of words. The comment got bumped down after I downvoted it.

It's funny for some reason, but... I know perfectly well and I understand why it happens. The level of education is going down significantly right now. Lots of problems, though many of them are being solved. At least solvable with the help of the website https://writix.co.uk/buy-dissertation-help , which helps in writing materials on various topics.Used the website when I was in graduate school, when I could buy a dissertation. It was invaluable help then. And I'll say that it didn't affect my professional skills or my education.