My attempt at an N-body simulation (gravity)

Over the previous year, I learnt about physics simulation and a lot about physics in general, mainly from brilliant. Thanks to those who helped me a lot along the way, Neeraj Anand Badgujar (Talulah Riley), Steven Chase, and Karan Chatrath.

First, we need data for each position of the n bodies; you can do this by assigning random initial positions to the n bodies within a certain range.

First, let's just try to figure out the dynamics of one body, for a small timestep. 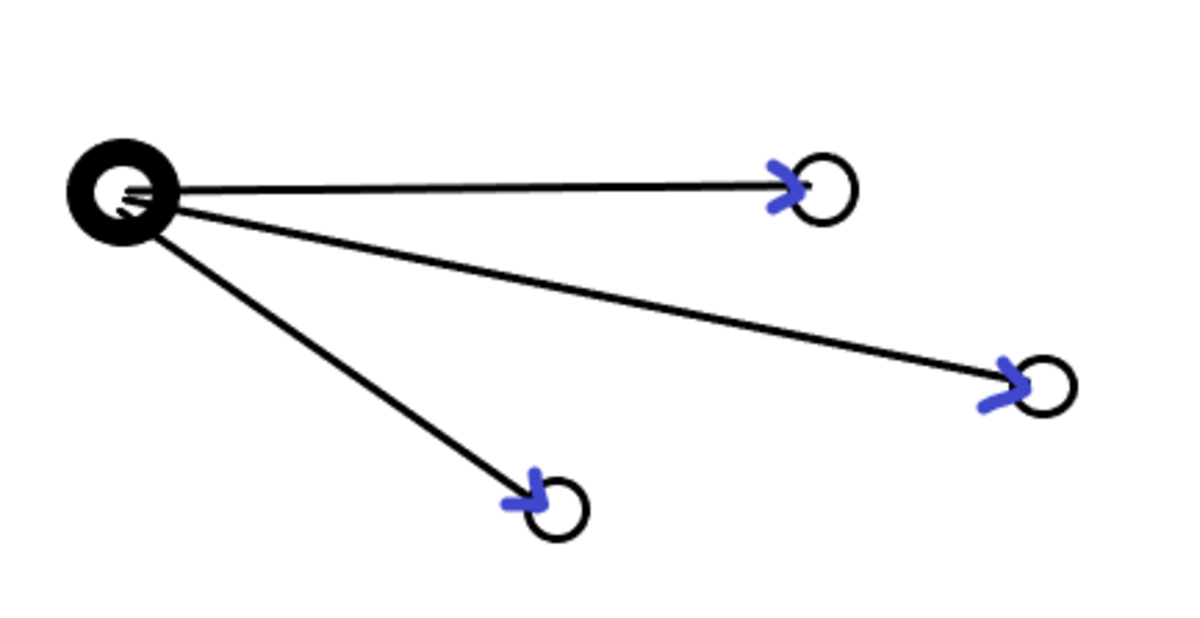 Forces can be computed by multiplying the unit vectors to each other particle and the magnitudes of the gravitational force.

Essentially, 3 things should be computed each time for the n−1 bodies to find the total force exerted onto only 1 of these bodies.

The distance between the single body and each other body, the unit vectors, and finally gravitational force:

To do this as a program, loop through each of these bodies, and keep a total of the force which you keep updating until you reach the final n−1th body.

So, you should only iterate the algorithm when the indexes of the position data i and j are not equal, ie. so you skip the the jth body when doing force computation.

Another consideration: what will happen if both bodies collide perfectly; ie. their centers touch? This would result in division by zero as well in the force computation; we cannot allow that to happen.

However, once they are no longer in that small range, gravitational force again takes precedence.

If you want you can code in some resistive forces, like electrostatic force where all the charges are positive or all are negative, you can just calculate it along with the gravitational force using Coulomb's law. You can also add collision mechanics to it to prevent this error.

Also, when you want to animate each body, it will be a little computationally expensive. I found that using the Matlab rectangle() function to draw a filled circle less expensive than viscircles(). All you have to do is draw the rectangle with curvature and add a random colour to it. I personally added random colour using a colour matrix for random RGB values with row vectors for each body.

Like most of my simulations, I put the dynamics data into arrays which correspond with the time frame of the system and animate separately to the simulation.

However, since there are n bodies, we should have 2 matrices n×f where f is the number of frames the animation has, one for each component in x and y.

The computation does run on the CPU, so wait a few seconds before the animation happens.

Nice simulation. The singularity problem is a tricky one. Another way to avoid these (at the expense of modifying gravity) would be to use the following expression for the strength of the attractive force between particles.

Let r be the distance between particles. For r>r0​, the force is attractive, and for r<r0​ the force is repulsive. So as long as the particles don't have too much kinetic energy, they will repel before they can touch, and then start attracting again as they move apart.

Ah, perfect. Yes, this looks like quite a neat trick. Also pretty computationally cheap since I can finally get rid of the extra if-else statement.

Also, these orbit problems tend to be badly behaved, numerically. And I suspect that with many particles, they will be very badly behaved. If you run with time steps spanning several orders of magnitude, and monitor the ending position of one of the particles, do you get consistent results for all trials?

@Steven Chase I've done some editing now, and after adding the modified equation you gave me, it's starting to look just like the particles are colliding and bouncing off. Looking pretty epic. Where did you get that equation?

By the way, here's the data I'm getting when I set

Here I've displayed the values of xPositions and yPositions for different timestep values.

In terms of precision, it appears to be quite badly behaved, but for graphing and plotting it will look roughly the same.

I read somewhere that Euler's method doesn't conserve energy or momentum well when solving orbits. There are methods specialised for second order ODEs that arise in orbits, but they are either too complicated for me or too slow. Either way, it's kind of sad that this code is running solely on the CPU. If I did implement this using CUDA (it would give a raw data output) and animated the plot using Matlab, or OpenGL or something, it would be much much faster. For now, I suppose a 10^-5 timestep gives accurate enough results for 4 bodies.

However, I can only hope the result for 20 bodies isn't too inaccurate. I will post a couple of new gifs with the modified equation, it looks spectacular.

Glad to hear it. I look forward to seeing the new graphics. I made the equation based on inspiration from the Lennard Jones intermolecular potential.

I was also reading about integration schemes for orbital calculations. It seems that there is a class of integrators called "symplectic integrators" that are ideal for these applications. I don't understand how they work

Also, I presume that the CUDA speedup is based on parallelism (such as exists in many-body systems). But do you have to specially write your code and tell the CUDA cores how to split the work? If so, it sounds like a daunting task.

Yes. Matlab does have the Parallel Computing Toolbox where you can write regular for-loops and Matlab automatically parallelises them for you, but it requires a purchase. However, there is a free trial.

If you want to have total control over the parallelisation, you'd have to code the CUDA kernels in yourself. Which is pretty hard.

Another alternative is OpenGL. You can avoid kernels and low level GPU coding by simulating nbodies inside the shaders, however this forces a graphical output as well. Shaders work in parallel too. By doing computation inside a fragment shader itself, you can produce a graphical output and do simulation quickly.

Since I'm using Matlab, I suppose I better start getting the works by starting out parallel computing with the toolbox.