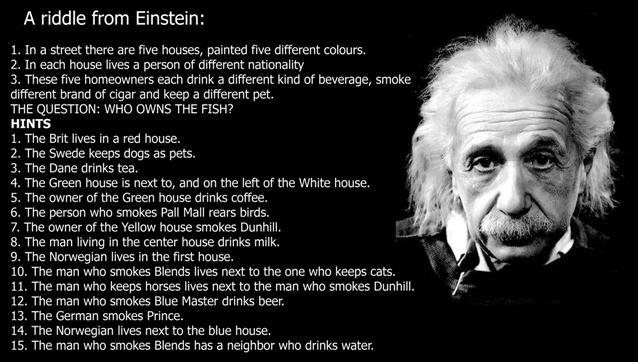 Variations of this riddle appear on the net from time to time. It is sometimes attributed to Albert Einstein and it is claimed that 98% of the people are incapable of solving it. Some commentators suggest that Einstein created such puzzles not to test out intelligence but to get rid of all the students who wanted him as an advisor. It is not likely that there is any truth to these stories. Whereever this comes from, it is a nice riddle.

The first sentence of the first comment spoils the answer.

It is the German that owns the fish. Variations of this riddle say it's the Norwegian, etc. Must have something to do with "relativity of reality', i.e., to quote Mythbuster Adam Savage, "I reject your reality and substitute my own!"

Got the same answer :) Is there any faster method to do it other than a table?

The answer can also be no-one.

A possible answer could be The German who lives in the Green house, drinks Coffee, smokes Prince, keeps fish. We hope John to disclose the simple smart solution soon but till then lets do it my way:

If you know your journey is going to be long. What do you do? Well, may be you try to make it interesting, or try to introduce anything that will help you to endure the journey, don't you? Same goes with problems involving long solutions. After trying a bit it got tedious. So, I knew I have to travel long so I was thinking 'how to approach'; 'what should be the method' rather than 'what is the solution', and then came with the following approach which kept me quite patient during the solution till the end.

I drew 5 rows each containing 5 columns, arranged them vertically. That is, to get 5 grids one below the other, each having 1 row and 5 columns. Then named the grids as 'Color', 'Drink', 'Smoke', 'Pet', and 'Nationality'. Then I started filling appropriate boxes as per the hints. {Used pencil and eraser}

I started with the hint: 'the man living in the center house drinks milk', because it's definite than the rest. Wrote 'Milk' in the 3rd {from the first} box of the grid named 'Drink'. Then used 'the Norwegian lives in the first house'-wrote that in the very 1st box of the grid named 'Nationality'And so went on. Try it ! the approach guarantees a solution!!

Uhhh.... I think "Dane" is referring to the nationality. Look at line 3. It says "The Dane drinks tea." And the names were never mentioned.

Oh! yes you are right it's a nationality. Thanx for pointing out the mistake

Okay, @Tan Li Xuan I m working on it once more since I was getting two nationality in one house it can't be correct.