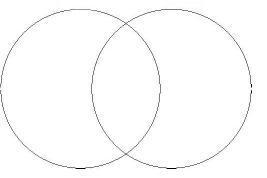 Prove that any two circles intersect each other at maximum two points.

The statement is wrong: two concentric circles with the same radius intersect at infinitely many points.

Otherwise suppose they are distinct circles. Suppose they intersect at at least three points. Choose three of them, A, B, C. Then ABC has more than 1 circumcircle, a contradiction. Why is this so?

The above is a straight line. If the circles intersect at points P1​,P2​,P3​,..., all of these points must and will lie on this line. Thus, we need to solve this line with one of the given circles to get the intersection points. If we substitute for x back into one of the circle equations, it will yield a quadratic equation, which can have at most two distinct real roots. For each distinct real root in x, there will be only one real root in y(we get this value by substituting value of x in the line). Hence, two circles can intersect at a maximum of 2 distinct points*.

*The fully intersecting(superimposing) case is a degenerate one which can be understood easily.

Hint: There is a 2 line solution.

Hint: Any triangle has at most one circumcircle. Prove this in (essentially) 1 line.

It can also be proved in this way,

Suppose the opposite, and let circle ABC cut the circle DEF at more points than two, that is at B,G,F,H.

refer to this image

Clearly circle DEF will not actually be a circle. For the sake of demonstrating a contradiction, we suppose that it is.

Join BH and BG, and bisect them at K and L.

From K and L, draw perpendiculars to BH and BG, through to A and E.

Since AC cuts BH into two equal parts at right angles, from the porism to Finding Center of Circle, the center of circle ABC is on AC.

For the same reason, the center of circle ABC is also on NO.

But as the only point on both AC and NO is P, it follows that P is the center of circle ABC.

Similarly, we can show that P is also the center of circle DEF.

So we have two circles that intersect which have the same center.

From Intersecting Circles have Different Centers, this statement is contradictory.

Hence such a pair of circles, i.e. those that intersect at more points than two, can not exist.

Yes...you need to prove that

I will try to do it later, as I currently have my final exams. Yeah, I've liked your problem!

And yes consider this too, if they have to intersect at more than two points, then they must have the same radius too.

@Sravanth C. – they will overlap