Something that's been bugging me for quite some time is that my followers and following lists are randomly ordered (somewhat). They're very loosely categorized by the amount of followers each user has (in the list), but it's still very random and inconvenient. For example, one can often judge the quality of a users problems by seeing if staff and other good problem writers are following them. In my case, I like seeing if popular people are following me! The bizarrely ordered lists make this task impossible in some cases, like Calvin's and Peter's. I have no idea if they're following me! Supposedly, Peter is, but I'm not sure about Calvin. Anyways, I asked Peter about this issue, and he claimed that the purpose was so that people didn't just see the really popular people when they looked who a person was following. That's ridiculous! If somebody is looking at a list of somebody else's followers, they know to ignore the people that they already are familiar with (if they're looking for somebody). I know it seems like a silly thing to be annoyed by, but it's really annoying. So my suggestion to Brilliant is to have the option to order lists by preference, or by certain factors like most problems solved, most followers, most liked solutions, least followers, etc.. If you support my ideas or would like to share your own annoyances, comment below! If you agree with me, reshare and like this post! :D

The List for people you are following is organized by followers, which seems perfectly fine by me. However, I agree with rethinking how to order the people who are following you.

That's the thing. It actually isn't! Sometimes it is, but it usually excludes staff members from the list, even though those are usually the only people that somebody actually cares about. It's really annoying.

Hmm, really? It seems to work for me... Let me take a screenshot. 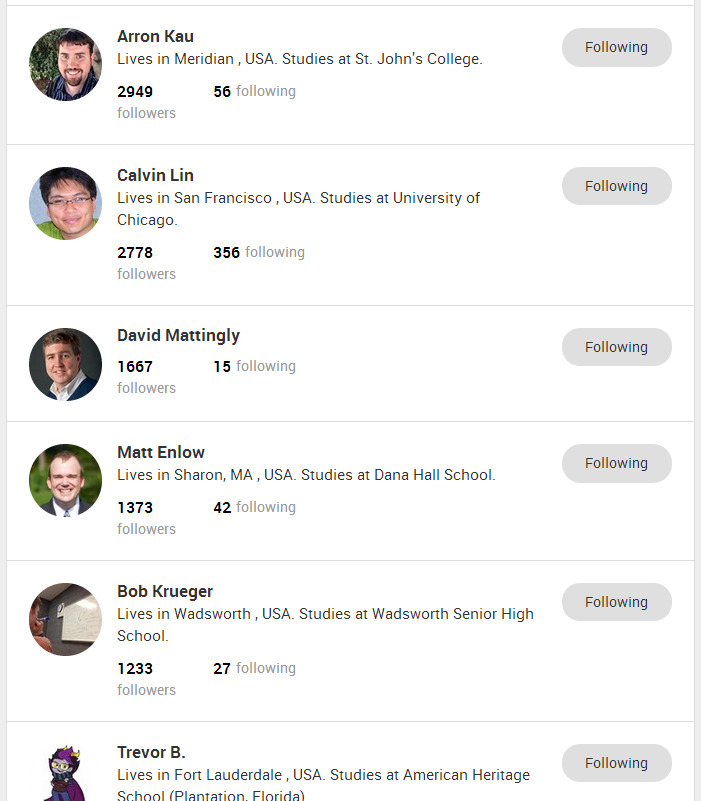 @Daniel Liu – I've seen it go both ways as well. Mine is disordered, with you and Jatin at the top and people I've never heard of immediately after them.

@Finn Hulse – Mine is also disordered,but most of the people with large amounts of followers are at the top