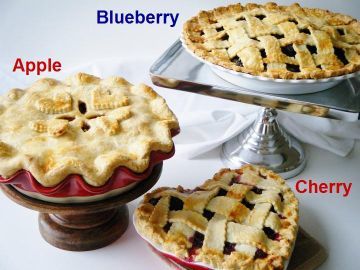 Sidney Morgenbesser, a philosopher, while ordering dessert at the restaurant one time, was told by the waitress that he could have either apple pie or blueberry pie. He ordered the apple pie. The waitress then came back and told him that cherry pie was available as well. Sidney then said, “In that case, I’ll have the blueberry pie.”

Was Sidney just being silly, or can there be any possible logic for his choice?

We’ve heard about non-transistive dice, where

which have the property that when any two are rolled together,

But how can something like this work for pies A, B, C, in this example, where the mere existence of another pie being available (the cherry pie), would cause Sidney to switch to a different pie? Is this something out of quantum physics, where, by opening a new slot, light could cease striking some particular photodetector?

There is, in fact, one possible rationale for Sidney’s strange decision. No quantum wierdness is necessary. Let’s say that each pie is ranked 1st, 2nd, or 3rd in 7 different criteria (such as flavor, aroma, texture, nutrition, etc.). The pies can be ranked as follows:

The “best pie” is the one that has the highest ranking in the most categories, among those that happen to be available. So, we have, between the different pies that are available:

Pie B beats both Pie A and Pie C (when they are all available) because it tops in 3 categories, which is the most among the three pies!

Note by Michael Mendrin
7 years ago

Related to this is Dan Ariely's TED talk on decision theory, which reveals several shocking experimental results which indicate that we may not be rational when making choices.

It's an extremely interesting field of study, to see how just changing the names / expression / way that facts are presented, have a huge effect on what people choose to do. For example, Hurricanes given female names claim more casualties.

Referring to Dan Arlely's comments, yes, this is the kind of thing that unsettles Adam Smith's principle of the free market, supposedly the best means of determining the most effective division of capital and labor. The problem is, "but who decides the criteria?", which can significantly shape the outcome. A free market is good, but it always deserves at least some review and regulation, otherwise results may not be what the general public wants. For example, as soon as it becomes hugely profitable for corporations to eliminate excessive CO2 in the air, the global warming problem will be solved well before the end of the century. Otherwise it's not likely to happen if it's unprofitable, and left unregulated.

This relates somewhat to Arrow's Impossibility Theorem as well. The marketing idea of "asymmetric dominance" is also perhaps related to it, though the logic behind the latter is far less existent...

Interesting... but can't we assume that Sidney has just changed his mind when the waiter came the second time? haha

This falls under decision theory, and related game theory, which can have an impact on voting and economics. This is one of the many paradoxes that can arise, when certain conditions are set for coming to a decision. For example, a lot of stock market and commodities trading are now done by computer software, which doesn't necessarily always appear to behave rationally. Sidney Morgenbesser, while known for being a funny guy, was very well aware of these paradoxical quirks of decision theory.

Hey, Eddie, it was your "A game of dice" that made me think of this one.

Utkarsh, well, but that's exactly it---in attempting to "logically select pies", criteria has to be first decided, and it's not necessarily unique, which can lead to different, and even seemingly ridiculous, outcomes. This is all part of "decision theory". This problem asks for any one example of criteria that would prompt Sidney to choose blueberry, once he was told cherry was available.

One more question, suppose we have two pies A and B (A for Apple and B for blueberry) and suppose we are judging them on 6 criteria , of which A tops in 4 and B in 2 criteria. Then surely the selected pie would be A as it better than B . At that point we introduce pie C (cherry) . Then , at that point there is no way one chooses B as if C is topping more criteria than A means it is better than A and so C would be the selected pie, in case it tops less criteria than A if all pies are counted and judged on the basis of same criteria then A would be better than C then A would be chosen. B could only be chosen in case we introduce more criteria then B may have chance of winning if it tops in most number of criteria. So my question is simple that why should Sidney be forced to introduce more criteria than she had already chosen , on which she always decides pies ?