So, now that we know how to interpret shortened dot structures. I think I shall go into a bit of the functional groups.

A functional group is a group of atoms/bonds that possess a predictable chemical behaviour.

I will cover some of the most common functional groups that I know. If I've missed any, feel free to comment those.

First of all, I will put them into three categories.

We call this an alkene 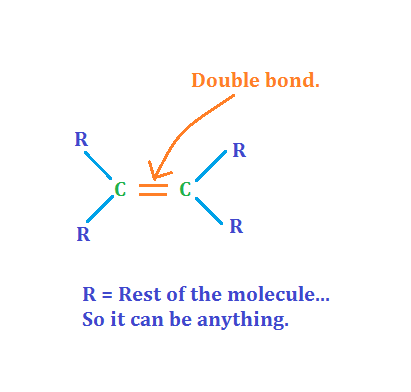 alkene. Usually those R groups will be just a few hydrogens and carbons. But it can be anything...

We call this an alkyne 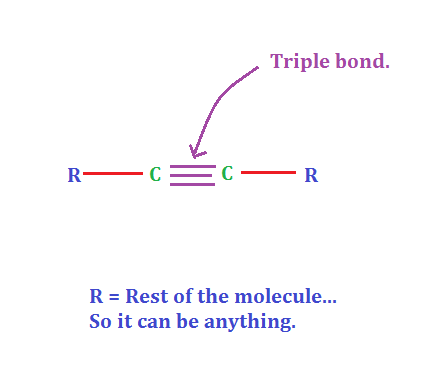 alkyne. Also, keep in mind that carbons can only have four bonds. Well actually they could have more but that's a different topic altogether.

Lastly, we have this called an aromatic ring or arene 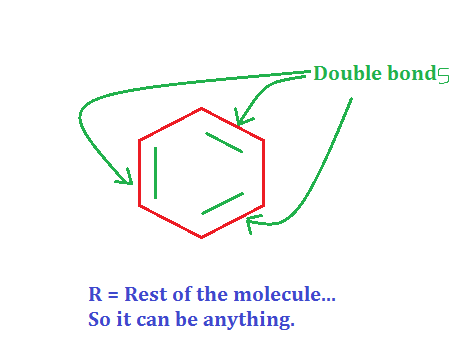 aromatic ring or arene, even though you may think it is an alkene, it is not.

Firstly, there is carbon/carbon groups/R groups bonded to a nitrogen atom. We call this amine

amine, and amine due to the presence of nitrogen.

Second of all, R groups bonded to an oxygen which is bonded to a hydrogen → a hydroxide group. This is called an alcohol

Now, if the oxygen is bonded to some R group, it is called an ether

Alright, how about I replace the oxygen in the alcohol with sulfur? Sulfur is on the same group as oxygen. So I can do that. We call this a thiol

Of course, now I can replace the oxygen in the ether with sulfur as well. This is called a sulfide

sulfide, or a sulfide group.

Now, let's have an R group bonded with a halogen (Side note: halogens are the elements on group 17). This kind of compound is called an alkyl halide

This is generally called the carbonyl group

Firstly, if I have a carbon bonded* with a R group and a hydrogen and double bonded with an oxygen. This is called an aldehyde 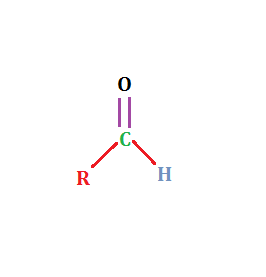 Now, let's replace the hydrogen from the aldehyde to a R group. We get what is known as a ketone

So, let's keep going. Let us now replace the R group with a nitrogen attached straight to it. This is labelled as an amide 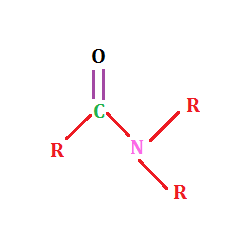 Main difference between amine and amide is that amide is right next to a carbonyl group, if there wasn't that carbonyl group then, it would be an amine.

Hmm, I'm running out of ideas... Let's replace the nitrogen with a hydroxide group. We get... a carboxylic acid 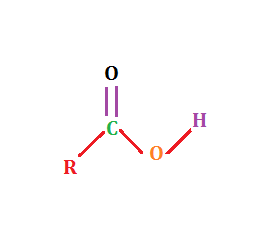 Now a R group without the hydrogen is called an ester

Right, now let's replace the R group with another carbonyl group. This is labelled as an anhydride 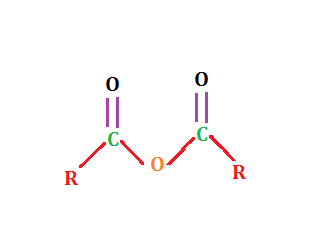 I know this is getting boring now, but bare with me.

Finally!! Let's put a halogen next to a carbonyl!!

And we get an acyl halide 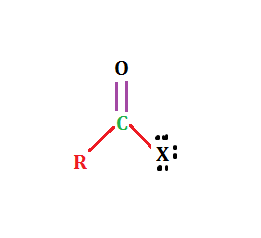 There are more but these, in my mind are some of the most common types.

You know the the note about the aromatic ring? It doesn't actually have double bonds, people used to think that but recently its been discovered that it actually doesn't contain any double bonds but only single bonds.

The fourth electron in each carbon form another ring made out of electrons (it can be called a ring of delocalised electrons because the electrons can still move within the ring) this make the structure very stable and unreactive. Another name for that molecule is benzene.

Delocalisation of electrons hasn't been introduced yet, so I think it is fair to say it is a double bond for now.
In fact, you said it consists of single bonds only. That is definitely not true. It is mix of double and single bonds that is present in the ring. Well, that's for some other day to discuss.

Well, I haven't really gone into resonance structures or anything i.e to give a bit of context on that. I'm sorry. ^^

Nice. In Future notes, I'd like to have IUPAC naming and some questions. Thanks a lot.

This is a very useful note! Hope to get some related problems from you.

And, may I ask for your permission to include this note and the previous one into the Chemistry Topics?

Yes, of course. ^^ Feel free to include any of my chemistry notes there. =)

Hey can you do one for NMR if possible? Thanks