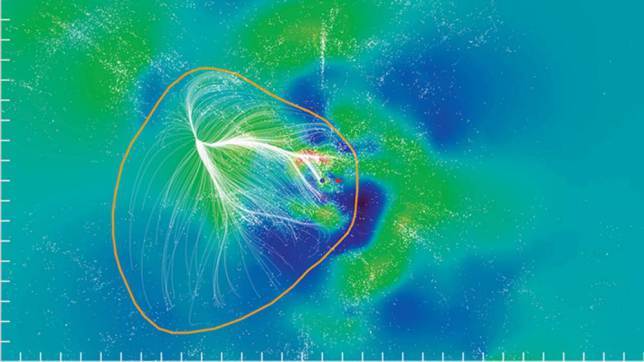 For millennia, people's addresses only had information about their terrestrial location, though the Milky Way was known to exist since as far back as Democritus and Aristotle.

Then along came Copernicus, who changed the way we look at the skies and made it important for us to have our addresses include "The Solar System". From there it was just a question of how good your 'eyes' would see stars. The images of the famous Hubble Ultra Deep Field (UDF) image and the Hubble eXtreme Deep Field image (XDF) simply urge us to reconsider our cosmic address, since so much information is contained in such a small region of space.

Hence, we defined a supercluster, though not precisely. Now, in September 2014,this article was published in the Nature magazine and it defines precisely what a supercluster actually is and some. It adds one more line to our cosmic address. Laniakea (Hawaiian for 'Immeasurable Heaven').

The orange region in the picture is where you, me and we all are, right now. The point at which all three 'tentacles' converge is what is the Great Attractor, towards which we are moving right now. It is speculated that this supercluster might be part of something bigger, and that makes me feel all fuzzy inside!

What are your thoughts?

i find this to be very intriguing.