Physics Doubts: What is Rotation and whether torque is responsible or not? 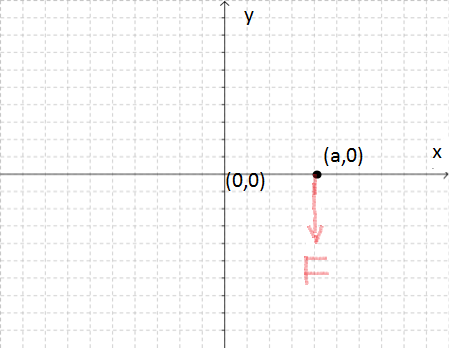 Doubt 1 : In the figure shown , a particle is initially placed at (a,0) and then the force F is applied in the direction of negative y axis. I am confused about what will be the torque acting on the particle about the y axis. It seems that it is 0 because the particle is not rotating about the y axis, but mathematically the cross product i x (-j) is not 0 (but the component of torque in the direction of y axis is indeed 0, and that makes me still more confused).

Doubt 3 : What is the basic definition of AXIS OF ROTATION. Is the statement " axis of rotation is always perpendicular to the plane of rotation" correct?

Also, what is the best definition of Rotational Motion about an axis ?

Hi @Abhijeet Verma
I am glad to see your doubts.. Only a good inquisitive mind can ask such questions...
You are basically stuck in the fundamentals of rotations which many teachers even avoid to discuss..!!
let me give you few points to ponder upon,...
1) Particles doesnot rotate!!! they can revolve but they can't rotate..!!
2) Torque about a point and torque about an axis are two different things..Means toque about origin and torque about Y axis are two different things..
3) In general torque is not exactly related with angular velocity..it is related with angular momentum..i.e. Net torque about a point equals rate of change of angular momentum

To define rotation you need to have a rigid body first, then draw a random line on the body, if with time during the motion this line rotates then the body is said to be in rotation.

If a point object is revolving around a fixed axis , won't it be rotational motion ?(I actually thought that revolving is in a way rotating)

If we say that rigid body rotation about an axis is the motion in which all the points on the body move a same angle in a same interval of time, then pure revolution of a body about an axis should indeed be rotation. Also, keeping aside , particle body has only one point, so why isn't its revolution- rotation? @Rohit Gupta sir