I noticed something odd, this morning. I was going through my old problems, and I decided to change the topic of my first problem from "Classical Mechanics" to "Geometry." Then, I went to the community page to look for new challenges. However, I saw this: 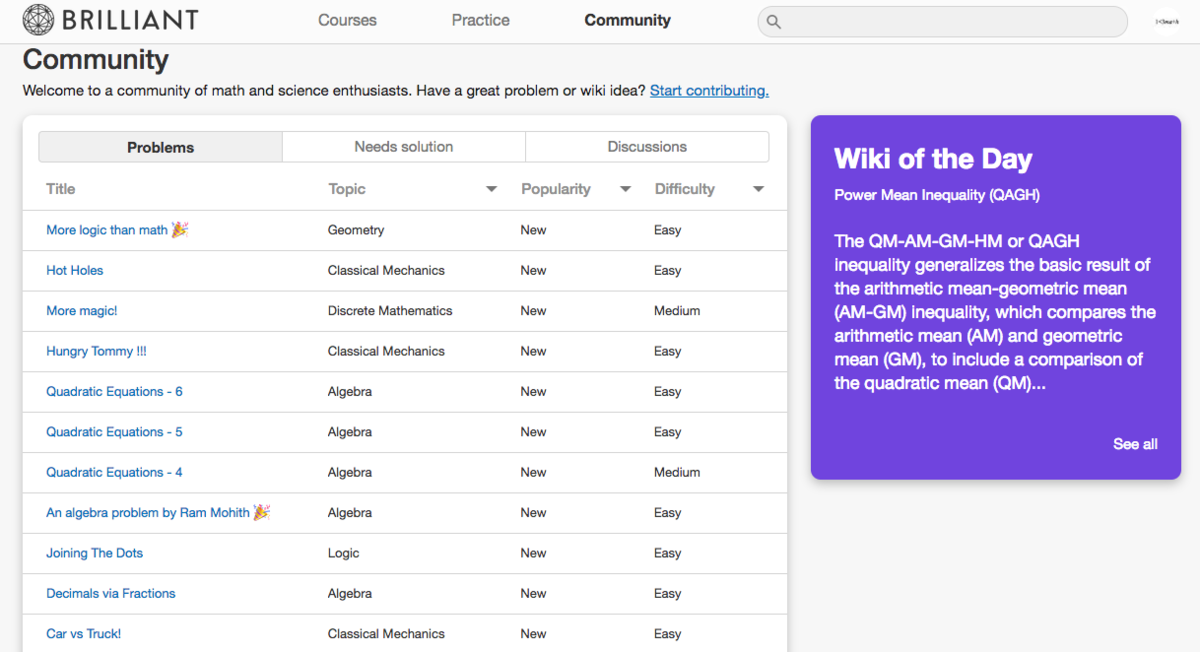 The picture below shows the community page before and after the edit: 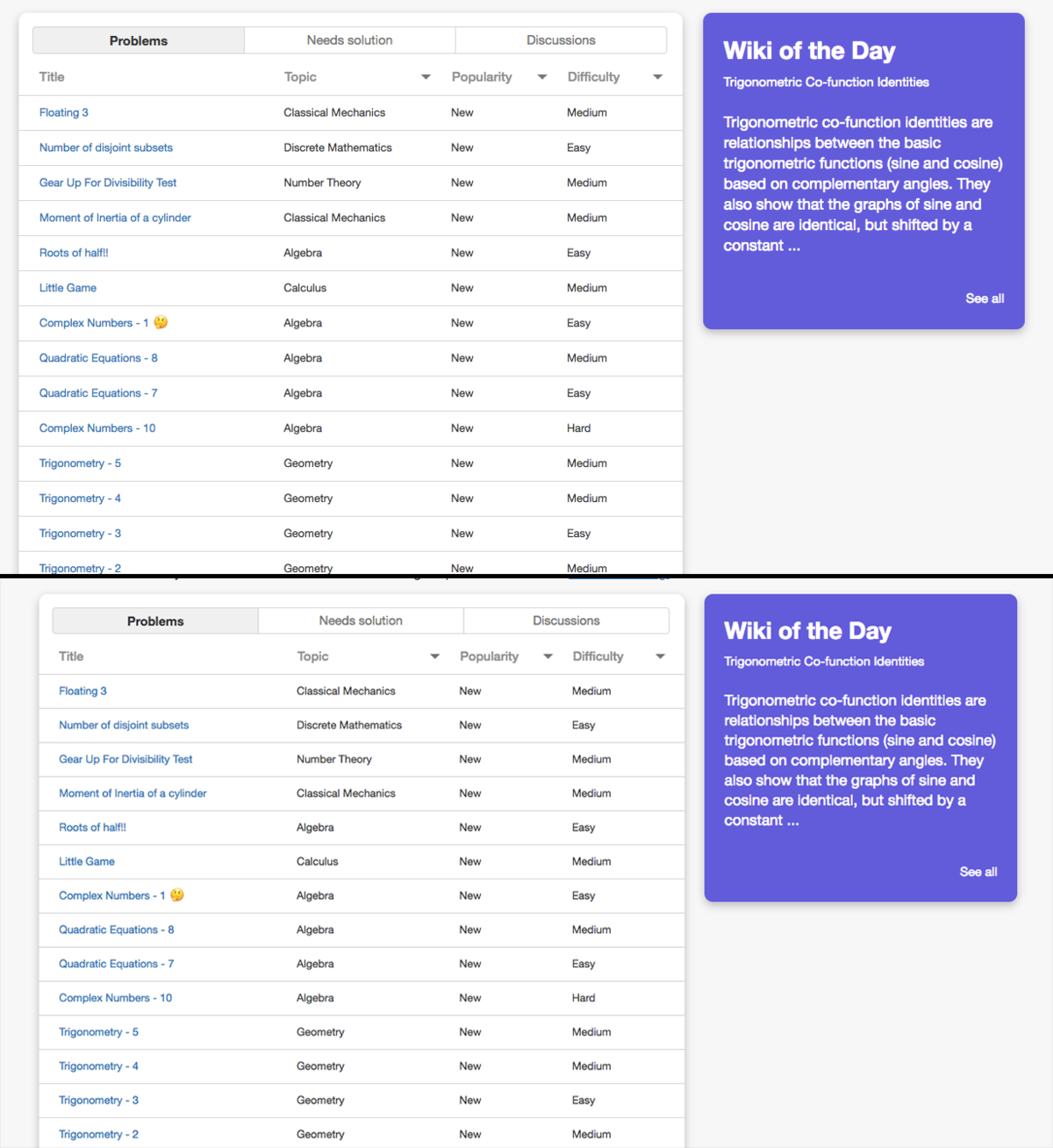 As you can see, nothing changed.

As I was reading through the comments, I read Ram Mohith's input on this; this phenomenon is definitely beneficial, giving old and dead problems a second chance; however, since editing the problem itself doesn't make it "new," I doubt this is an intentional feature. I feel that this phenomenon should be kept, but it should also be tweaked so that edited problems show up as new.

Once again, this is the community page before and after the topic change: 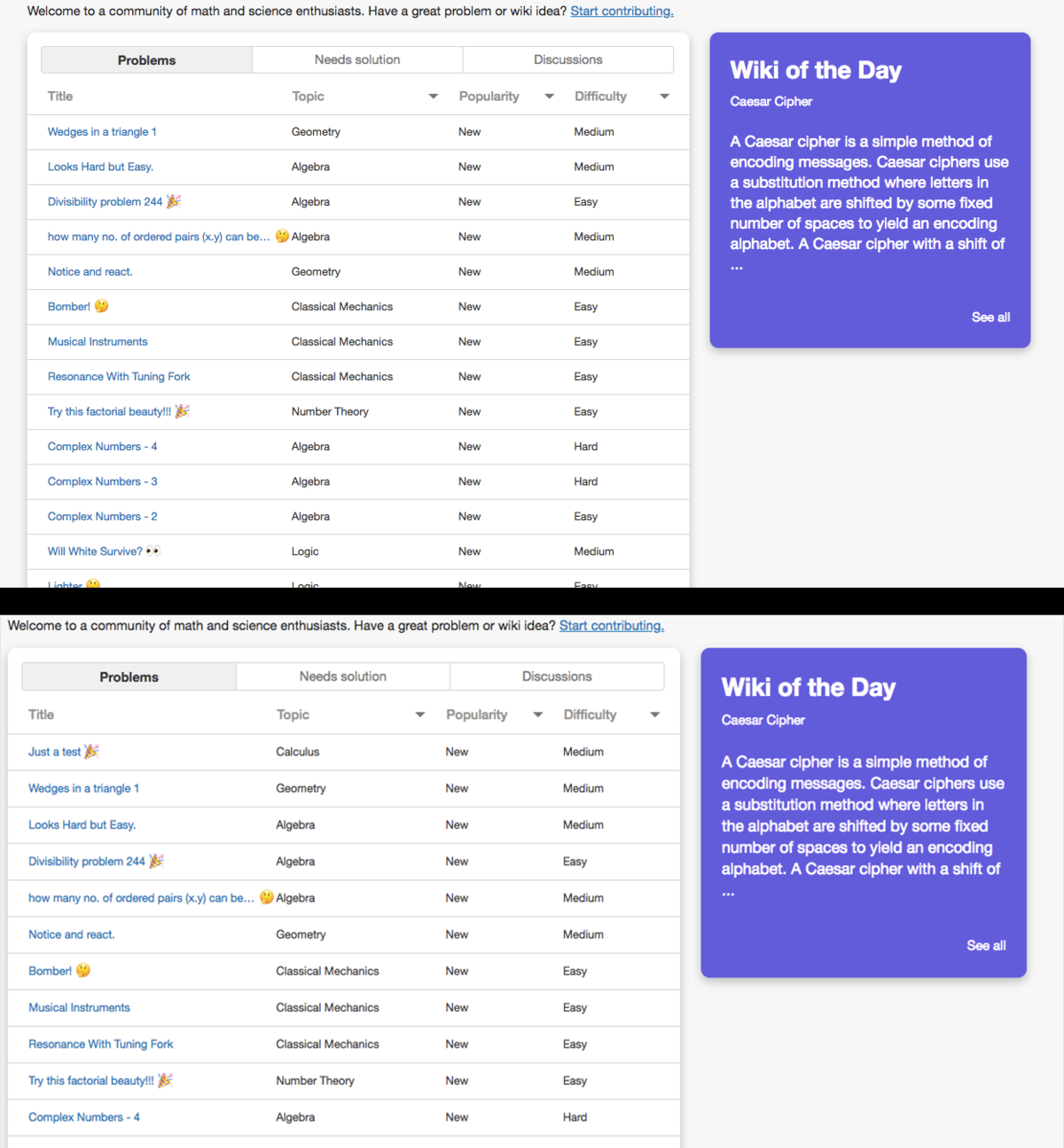 Brilliant user X X was correct, as suspected. I guess every experiment needs a conclusion, even though this doesn't count as a "real" and "rigorous" experiment:

In conclusion, there is a (suspected) bug with the community page algorithm that considers old problems with changed topics as new. The effects and intention behind the phenomenon can only be speculated about without official confirmation. However, this phenomenon can be built off of and learned from: Although this may spoil the Problems of the Week, this feature could be altered to make problems with edits made to the content considered as "new." Also, this phenomenon points out that the community page is not perfect; for instance, there is the bug where the preview for a problem starts an infinite loading process, and this loading preview covers some of the community content (see image below).

I too have been noticing just the last few weeks that some supposedly "new" problems are just recirculated (and not necessarily recently edited) old problems. I suspect the the production of genuinely "new" problems has slowed up enough to warrant staff resorting to this recirculation strategy, in part perhaps to avoid having the Community page look stale. I'm also not sure how the "Popular" questions achieve that status, as some that have been deemed so don't appear to have many solvers (even though they are relatively straightforward). Anyway, I'll be interested to hear of the results of your novel experiment. :)

Yes, my first problem also managed to get to the top of popular somehow. One of my friends tried it out today, but one solver can't be enough to cause that.

I rather say that this is a very helpful thing. Many underlying problems can be brought up using this. One the best example is my question Rising balloons. I have posted it on April 9 but it is not featured then. Recently, two months back I have reposted it again and now the staff has looked upon it and it has been featured in the problems of the week and now it has more than 40 K solvers. Hadn't it been featured I will be in a great loss. Thanks to this feature.

The "experiment" is done! I figured @Caleb Rash might want to see this, being a Senior Software Engineer; maybe he'll answer some of our questions.

Thanks for conducting the experiment! I have no problem with the users who identify and exploit this "glitch", but I'm not sure if certain problems being kept forever "New" or "Popular" this way is something staff will be ok with. It will be interesting to see how they deal with it.

Hi Blan (and others in this discussion), thanks for pointing this out. I've shared this issue with our other developers, and we'll look into it very soon.

I hope this feature will not be removed.

Also, this feature helps gives chance for the new comers to solve some good old problems.

Very good point! You can edit your comments to add a statement you missed.

Only changing a problem's topic would work, I've tried that before.

Yes, I regularly use this feature and repost my problem everytime. I too noticed this only 3 months back where one of my problem is changed from number theory to algebra and then it came again in "new" problems of community.