In this note, we will proof that repeatedly applying any algorithm on a solved Rubik's Cube would cause it to eventually return back to its solved state.

This problem seems tough. However, the solution to this problem requires no prerequisites, just a grasp of logic.

To tackle this problem, I will be using this technique called Proof by Contradiction

For instance, if I want to proof that statement A is false, I assume otherwise; that A is true. Then I show that if A is true, absurd stuff that doesn’t make sense would happen (ie. we would see a contradiction). Since A being true causes a contradiction, A must be false. Hence proved that A is false. It works the other way too; proving A is true.

Let’s first assume that there exists an algorithm (Let’s call it f) that would not cycle. In other words, repeatedly applying f on a cube would cause it to always land in a state that it has not been before:

The above conclusion results in 2 possible cases:

Where the cube returns not to the solved state but to some random state within the cycle (which we want to disprove).

To disprove Case 2, Proof by Contradiction can be applied once again. Let f−1 be the inverse algorithm of f. Basically, f−1 reverses what f does to the cube: 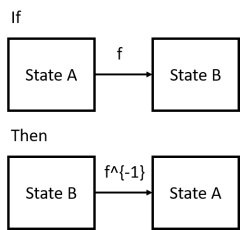 Focus on "State n". Notice how this diagram implies that applying the algorithm “f^{-1}” on state n would result in 2 possible states (State n-1 and State k). This is absurd because we know that applying an algorithm on a rubik's cube will result in only 1 possible state (ie. each state should only point to 1 other state). Hence we have reached a conclusion that Case 2 is IMPOSSIBLE. Which leaves us with Case 1 as the only case that is possible.

Hence, proved, that repeatedly applying any algorithm on a solved Rubixs Cube would cause it to eventually return back to its solved state.

Here is a fun problem on the Rubik's Cube asking you to compute the order of certain elements of the Rubik's Group,

Nice! Thanks for that information!

This reminds me of the cyclic arguments like showing why the Fibonacci numbers mod n is immediately periodic. I wonder if there is a connection.

There is. The same proof technique works.

See YouTube videos on how to solve they will guide you. Don't apply your brain or it will be next to impossible.