Teleportation, a topic widely regarded as a science fiction fantasy, has recently posed some good ideas that scientists have discussed. Below is a somewhat accurate, theoretical explanation of this fantastic form of transport that I found interesting.

If you were NASA and wanted to teleport an atom to Mars from Earth, for example, how exactly would you go about doing this?

Well, quantum entanglement states that two 'deeply opposite' particles are connected based on being generated at the same quantum state, this meaning that information about each can be transferred between them. Therefore, in order for NASA to teleport that atom, they would need to find a deeply opposite particle match that is also on Mars, or an 'in-between' waypoint particle that is opposite to both the Earth atom and the one on Mars. Once a match on Mars has been identified, the same idea for quantum computing* can be used to transfer the information about our atom on Earth to the opposite on Mars. The Earth atom is instantly destroyed as the information is moved to that of the atom on Mars, all due to the conservation of information, and NASA has successfully teleported an atom...or have they? The problem I noticed here is related to the conservation of information. If the atom on Earth was destroyed when only information was transferred, doesn't that mean mass and information are now equivalent? I may be missing something, and would be pleased if anyone could find research I may have failed to include. 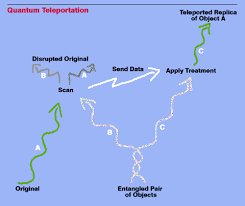 Note by A Former Brilliant Member
6 years, 4 months ago

I haven't got a deep knowledge about physics. But I have a common sense. Teleportation by information exchange is simply not possible, now and never. The only way to transport all the information is to trasnport and replicate all the mater! You may "easily" transport one atom information, ok, but never a complex piece of mater.

Well, that beeing said (quoting mister Spock), I strongly believe that Teleport will be a reality in the future. But only by mater transfer trhough WormHoles (or simply saying - using subspace).

You open a door to a paralel space, smaller, much smaller, transfer the mater to it (step in), walk a bit and step out in onother door, that goes into the spot you want to go to.

It's certainly a cleaner and safer way of transport!

Yes I've read much about them but have also been familiar with the fact that the Worm Holes can not only let us travel through space but also time. The Einstein's Space-time fabric must be in your cognizance. I've watched a documentary of Stephen Hawkins in which he explained the basic concept behind wormholes, saying that they're nothing but a distortion(a fold in common language). So if we enter from one end then we will exit from the other end in some different time or space.

Good idea! I wondered about information, because it is only really data on a quantum state and not equivalent to matter. I will post another note on wormholes soon (my kind of physics).

I'm waiting eagerly for your note.. please do tag me

@Rishabh Tripathi – I will indeed :) - trying to make the simplest explanation possible

@Rishabh Tripathi – Time travel note is up now - how exactly do you tag people again?