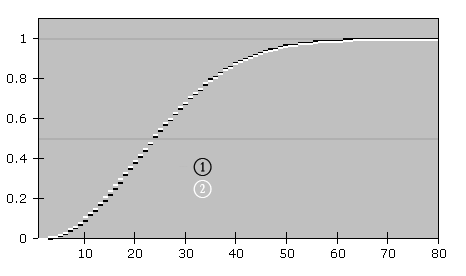 According to the "Pigeonhole−principle " we know that if in a given set of people , you want to make sure there are 2 people with same birthdays then you have to get 367 people in the set. (There are 366 choices for a birthday , therefore)

But do you know that 50% % probability of 2 people having same birthdays is actually achieved even in a set of 23 people !!!!!

So hard to believe, but I have a mathematical function to show this, I saw it on the Wikipedia Page

Here, the probability of people having same birthday will be given by

The graph of probability (of course it won't be a continuous graph because number of people has to be an integer) is as shown in attached image.

This shows how rapidly the graph grows in first few numbers.....

To know more about this problem, go to the wikipedia page ....

Actually if you think about it and calculate the numbers you can get this easily... it isn't rocket science.

But it is really not felt at the beginning that 50% probability will be achieved by 6% of the population needed to assure 100% probability !!!! @Joshua Ong .... that's why i felt like sharing here....it's very easy yet totally never tried thing, many people might have never tried to know what number of people gives what probability.... nothing new technique... but unexpected results !