Continuing with the Sequence of Bio About Universe, We are in Note 3 is About About Constellation : Emergence of the Universe . The Stars

Constellations are apparent groupings of stars which astronomers of antiquity imagined form figures of people, animals or objects. In a dark night, one can see stars between 1000and1500 , and each belongs to a star constellation. The constellations help us separate the sky in smaller portions, but identifying them is usually very difficult.

An easy constellation Orion is seeing , as shown in the figure above is seen in the southern hemisphere . To identify it we find three stars close together , the same brightness , and aligned . They are called Tres Marias , and form the belt of Orion , the hunter . Their names are Mintaka , and Alnilan Alnitaka . The constellation has the shape of a quadrilateral with three Marias center. The northeast corner of the quadrangle is formed by the reddish star Betelgeuse , which marks the right shoulder of the hunter. The southwest corner of the quadrangle is formed by the bluish star Rigel , which marks Orion 's left foot . These are the brightest stars of the constellation . As we see in the southern hemisphere Orion appears upside down. According to legend , Orion was accompanied by two hounds , represented by constelaçõs Canis Major and Canis Minor . The brightest star in Canis Major , Sirius is also the brightest star in the sky, and is easily identifiable southeast of Tres Marias . Procyon is the brightest star in Canis Minor , and appears east of Tres Marias . Betelgeuse , Sirius and Procyon form a large triangle , as shown in the diagram below .

The stars of a constellation are only apparently near the celestial sphere, as in fact are different real distances. When you look at an atlas of the sky, you see the constellations represented in diagrams like the one below, in which the stars are drawn with different sizes to represent different brightness. Note that this diagram shows the orientation in which Orion is seen in the northern hemisphere.

Stars and constellations visible to the setting of the sun on March 28, 2012, at 18h13m, facing west in Porto Alegre, Brazil

Precession of the equinoxes 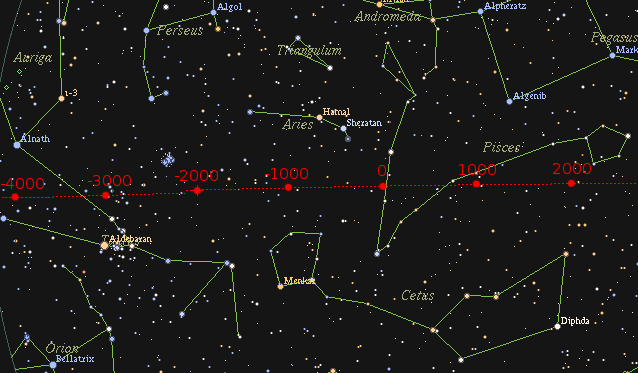 The zodiac system was developed in Babylonia, some 2.500 years ago, during the "Age of Aries". At the time, it is assumed, the precession of the equinoxes was unknown, as the system made no allowance for it. Contemporary use of the coordinate system is presented with the choice of interpreting the system either as sidereal, with the signs fixed to the stellar background, or as tropical, with the signs fixed to the point of vernal equinox.

Western astrology takes the tropical approach, whereas Hindu astrology takes the sidereal one. This results in the originally unified zodiacal coordinate system drifting apart gradually, with a clockwise(westward) precession of 1.4 degrees per century.

For the tropical zodiac used in Western astronomy and astrology, this means that the tropical sign of Aries currently lies somewhere within the constellation Pisces ("Age of Pisces").

The sidereal coordinate system takes into account the ayanamsa, a Sanskrit word where literally ayan means transit or movement and amsa means small part i.e. movement of equinoxes in small parts. It is unclear when Indians became aware of the precession of the equinoxes, but Bhaskar-ii in Siddhanta Shiromani gives equations for measurement of precession of equinoxes, and says his equations are based on some lost equations of Suryasiddhanta plus the equation of Munjaala.

It is not entirely clear how the Hellenistic astronomers responded to this phenomenon of precession once it had been discovered by Hipparchus around 130 BC. Today, some read Ptolemy as dropping the concept of a fixed celestial sphere and adopting what is referred to as a tropical coordinate system instead: in other words, one fixed to the Earth's seasonal cycle rather than the distant stars.

Some modern Western astrologers, such as Cyril Fagan, have advocated abandoning the tropical system in favour of a sidereal one 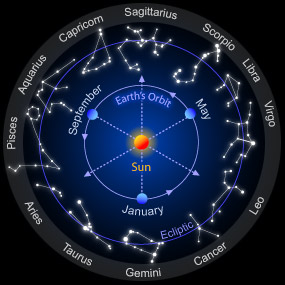 Of the 88 constellations in the sky, 12 are sort of special. They are certainly the most common. They are in a certain region of the sky that is called the Zodiac. So, they are called Zodiac constellations or, more commonly, Zodiac Signs. Each one has its own special symbol, and each is assigned to 30 days (approximately) during our calendar year. This range of days does not begin at the beginning of the month like our weeks; it begins around the 3rd week of the month and ends around the 3rd week of the following month. Because of this, there are 3 Zodiac constellations (or signs) for each season of our year, Spring, Summer, Fall, and Winter.

Do you know which Zodiac Sign you are? Find your date of birth below and match it to the Zodiac Sign to the left.

We should definitely have special classes for these concept

its good to read

I Make A Set With All My Notes About Universe !

@Gabriel Merces, all I can tell you is - it stands true to its name!

are zodiac signs related to in which star period we were born ?

Yes. Actually, you can't see your zodiac up in the sky during your birthdate because it is placed behind the sun :)

It's nice to know that Brilliant has notes about astronomy. I'm fond of it. :)