The Discovery of the Number e 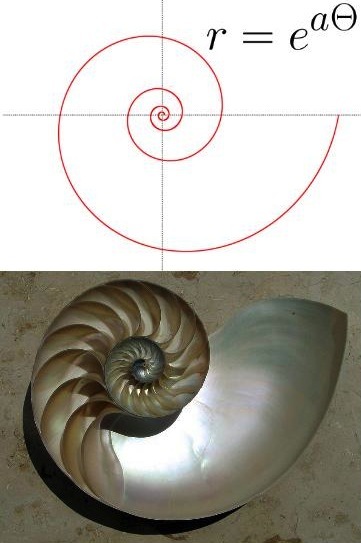 The more math and science you encounter, the more you run into the number e. Many of its applications and manifestations are alarmingly beautiful and often abstract. The logarithmic spiral is a shape that appears in nature, commonly in: shells, horns, tusks, sunflowers, and spiral galaxies. Despite the aesthetic wonders of the number e, it was actually first discovered in a pragmatic financial investigation of the behavior of compound interest.

When most of us are first taught about the number e, we are told that it is an irrational, transcendental number whose value is approximated by 2.7182. Most people simply learn to manipulate e. High school classes rarely mention where e comes from. It is usually introduced when learning about exponents and logarithms as a “special” base that you will use a lot down the road. Early in high school I remember asking a teacher what e was. I received the usual circular answer, that e is the base of the natural logarithm which in turn is the logarithm of an exponent raised to the base of e. This answer did not satisfy me, but I was told that I had to wait for calculus to learn other ways of approaching its definition.

e makes profound appearances in calculus. That said, e was first discovered with algebra in the 17th century. Mathematicians indirectly came close to e many times without directly calculating or recognizing it as anything out of the ordinary. e was almost discovered when logarithms were invented in 1618 by John Napier. Logarithms immensely aided longhand computation by allowing multiplication and division to be carried out by addition and subtraction. These logarithms were not the same as our current conception of a logarithm. They were numbers that aided computation, and were not yet thought of as functions that relate exponents to their bases. Mathematicians effectively computed tables of the natural logarithm but did not know that the number e was anywhere behind them. Historians are not sure who exactly was the first person to calculate e and recognize it as special. Most likely, e was not discovered by a mathematician, but by someone with more worldly motivations. The number e lies at the foundations of one of the most fundamental processes of finance: compound interest.

The 17th century was a time of rapid change. It was the era of the Scientific Revolution, the proliferation of colonialism, the emergence of mass literacy, and an explosion of international trade.The European Age of Exploration (and exploitation) brought disparate cultures of the world in contact, conflict, and business with each other to a degree that none of the large empires of old ever approached. Increasing the scale of commerce increased the demands for capital. Money lending began to play an increasingly large role in the prosperity of individuals, businesses ventures, and nations.

Given the growing presence of finance in the 17th century, historians believe that the first person to calculate e, was most likely a banker or trader exploring the properties of compound interest.

Interest is a fee charged by a lender on a borrower, for the service of providing a loan. Interest fees offset the opportunity cost to the lender of not being able to do anything else with their assets while they are controlled by the borrower. These interest fees accumulate over time, depending on the interest rate. Borrowers think of interest as the cost of having debt, while lenders think of interest as the return on their loan as an investment.

Compound interest is where interest accumulates on both the principal and the prior interest. Each time the interest rate is applied to the total accumulated debt or investment, it is referred to as compounding. If you invest $1 at 5% annual compounding interest, after the first year you would have $1.05. Unlike simple interest, in the second year it would increase by 5% of $1.05, yielding $1.1025. The general equation for compound interest, compounded once annually is

where S is the total accumulated debt or investment, P is the principal, r is the interest rate and t is the time elapsed in years. Under compound interest, debts and investments grow by a geometric progression.

Interest can be compounded multiple times within a given year or interest rate period. For instance, if you put one dollar into a bank account that returns 5% interest per year compounded biannually, then your account will grow by 2.5% twice in a given year. For multiple compounding intervals within each rate period, the formula for compound interest becomes: 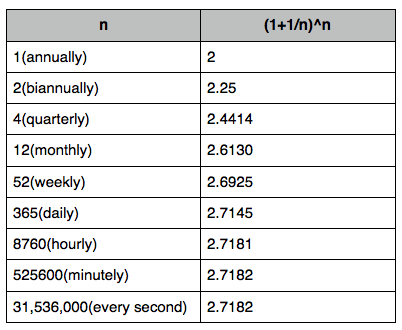 Compounding more times in a given time period causes your debt or investment to grow more often, but at a smaller rate each time it is compounded. As you can see, it would not take much imagination for an ambitious banker to wonder how much money could be made if the interest rate was really high and it was compounded as much as possible (daily, hourly, infinitely, etc.). If more compounding intervals make investments grow more often, would more compounding result in investments growing faster?

Historians believe that a businessman or banker likely beat the mathematicians to the thought experiment: if $1 is invested at 100% interest over one year, how much more money will be made if it is compounded often as opposed to only compounding it a few times in a year??

The equation for compound interest in this special case would simplify to:

It turns out that compounding weekly barely yields any more money than compounding monthly and at higher values of n, it gets closer and closer to what we recognize as the number e. As you can see, compounding more often does yield more money up to a point, but rapidly reaches an upper bound where growing more often, does not yield faster growth.Mathematicians would later go on to define e as the limit:

Join the conversation at the Brilliant.org discussions page.

For a wordier and more visual explanation of e, check out this this piece.

For a more detailed account of the history of 17th century mathematics surrounding the emergence of e, check out this page.

For most everything you could ever want to know about e, read:

e: the Story of a Number, by Eli Maor - This a history book written for a general audience. There is some calculus in it, in the best of ways. It is very well explained and introduced, anybody with comfort or interest in basic math would embrace his story telling.

This was something I wanted to write. Especially the banking part.