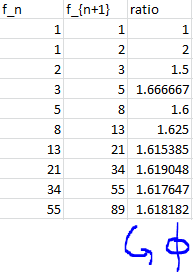 Now we can talk about the Fibonacci Numbers and the Golden Ratio. As Sharky presented in the previous post, we can take the successive ratios of Fibonacci numbers and get something interesting. See the picture above. The ratios approach the golden ratio! Now that we have found an interesting fact, let's try and prove it. How do we know that they converge to the golden ratio and not some other number?

First, let's assume that the ratios converge to some number x. Then, for really large n, fn​fn+1​​=x. Using the definition of the Fibonacci sequence we have

This should be a very familiar equation! From this we know that x=ϕ. But there are still some problems in this proof. It is more rigorous than our original derivation, but it still is based off of many assumptions. We already assume that the ratios converge. We must prove this first to be truly rigorous. Also, not even for very large n is fn​fn+1​​=x true. The ratios never actually reach ϕ, but only approach it. Thus assumption simplified the proof, but also made it less rigorous. All in all, a better approach would be more helpful. But we will have to wait for this until we know a bit more about the nature of the Fibonacci sequence.

Take a look again at our proof though. Did it depend on which values we started? No. Thus we can conclude that any general Fibonacci-like sequence will have ratios that converge to the golden ratio.

These set of operations take any nonzero number and converge towards the golden ratio. This is seen in the continued fraction representation, for in each step of the continued fraction, we are taking the reciprocal of what we already had, and adding 1. Except, with the method I described, its like we are starting our way at the infinity end and working our way back up. Any way, this pattern can be reflected in ϕ=ϕ1​+1. And even more interestingly, it can be seen in the proof above.

Try this same sort of idea with the infinite radical representation of ϕ. The same sort of thing should happen.

Is there any other interesting things that you can derive?

1) "First, let's assume that the ratios converge to some number x ... This assumption simplified the proof, but also made it less rigorous".

Can you prove the assumption? Must it always be true?

2) We know that this ratio must satisfy the equation x=1+x1​. Does this necessarily imply that it must be equal to ϕ? Why, or why not?

3) Does this proof work if we allow for negative starting values? In particular, is it possible for fn​ to be 0 infinitely often?

Thanks! I tried to come up with a not-intentionally-fallacious "proof" that would purposely serve as a bad example.