The Perfect World of Mathematics 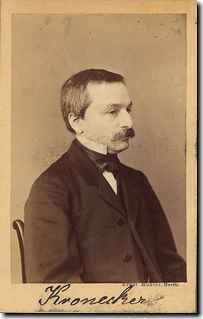 Leopold Kronecker (picture) once said, "Die ganzen Zahlen hat der liebe Gott gemacht, alles andere ist Menschenwerk (God made the integers, all the rest is the work on man)". Truly the Mathematics world is man-made and it is an ideal world confined by axioms.

But it was only after more than one year joining Brilliant.org, a few times being reprimanded for the way I present solutions and proofs, especially by the Challenge Master Calvin Lin, and meeting up with fellow Brilliantant and Malaysian Pi Han Goh that I finally relearned this fact.

After meeting Pi Han last week, I found that he is living in a world of his own. Later I came to realize that he is right. When we are in the Brilliantant world, it is meant to be not like the real world. And in this world of math we have to provide solutions according to the rules of math, which I have not been doing. Therefore I must apologize to my fellow Brilliantants, especially Calvin for living in the real world for too long.

Three decades of working in real commercial world had reconditioned me from a nerdish idealistic youngster to a down-to-earth pragmatist who lived by the dogma that in the real world there is no such thing as an ideal solution and we have to content ourselves with any workable solution. And I have been using this approach in solving Brilliant.org problems.

I am retired from working now. My last few jobs were in marketing, public relations and corporate communications. My main concern was what words meant to the general public audience. This concern is still with me after I joined the Brilliant community last March without knowing words can have different meanings in different communities.

I recall reading a book on Stephen Hawking. The author, a physicist, devoted a page explaining the meaning of 'prediction' in Physics. She was aware that to the general audience 'prediction' means looking into a crystal ball and then making a statement on whether certain event will or will not happen. But when we say Einstein's theory predicted black hole. It does not mean that black hole might or might not exist. Prediction here means telling why black hole must exist and it was just that we had not discovered it.

Likewise, I have been reading the word 'prove' as a layman does, as in providing forensic evidence like in CSI, to show that something is true or false. But in the math world, that something can be a known fact, proving means explaining why it is a fact within the confine of mathematical rules.

From now on, I will try putting on different thinking hats to solve problems in different worlds. To my fellow Brilliantants, please talk real during your 10% awaken life in the real world.

There is absolutely no reason to be apologetic; the solutions of yours that I have seen have been of very high quality, and judging from the number of upvotes your solutions receive seem to be greatly appreciated by the Brilliant community. Is mathematics an exacting language? Yes, of course, sometimes frustratingly so. But it is beautiful in its own way, and every day I learn something new about it, a statement I make with not shame but pride.

In any event, thank you for your contributions to Brilliant; this community is enriched for having you as a member. :)

Sravanth and Brian, thanks for your kind words. I am not discouraged. It just that I find myself a bit of track sometimes and want to improve myself. It has been an exciting year for me after joining the Brilliant community. It is just that the wife complains I spend too much time in it.

Haha. Yes, this site is quite addictive and can take time away from other things I should be paying more attention to. :)

Even my mother scolds me spending much time on Brilliant!

Thank you sir! For understanding me and Brain Charlesworth sir.

Oh yes! You are quite right sir, even my mom kills me if I spend much time on it. . .

Now that you have realised everything I am happy! I also hope you'd successfully complete your 365 days streak and go for much more!

I admire your solutions and want to imitate them.

As they do say: "Good composers borrow; great composers steal," or "Imitation is the grandest form of flattery." ;)

For some reasons I have found imitation to be a 'good start' for learning. It doesn't hamper originality unless the whole purpose is mimicry. You want to learn how to ride a bicycle? Closely watch others and 'try' to imitate them. Slowly you learn. We learn language speaking skills through imitation (most of which is hence biased). However, later we seek towards originality.

There is much value in imitation. I would like to consider flattery as one of the bonus values.

I used to be an idealist. I'm happy being a pragmatist :)

Sir, as you are far too experienced than me, my suggestions I feel can't help you much. But according to me your solutions are beyond imagination, sometimes I feel if the question can be solved this way too.

Your solutions to my problems are really BRILLIANT! Sir please, this is a request, be yourself and follow your heart.