Here I am continuing my first note Emergence of the Universe , In this Second note I want to talk about stars and some of its features

The stars are "born " from nebula constituted largely by gases , dust and solid particles.

Scientists explain that there is a mutual attraction between the particles of matter that makes up the big cloud - the nebula . This attraction is called gravity . Due to the force of gravity , which is a matter nebula groups , composing a compact mass and forming stars.

Some stars have reached a gigantic size , and the temperature inside is very high . The pressure and heat become intense in the center of these stars that a large amount of energy is released as heat and light. This property own produce heat and light is what differentiates the stars and planets of other stars .

The starlight is produced by its energy , which radiates through space in the form of light. The stars do not last forever . They are "born " , evolve and " die " . This same process occurs with the Sun, as it is also a star .

This Pictures It's A Nebula 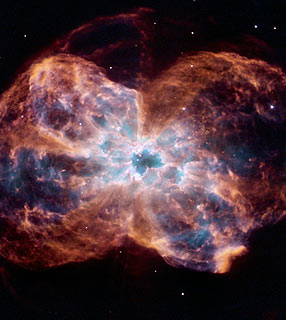 Starlight : It may seem strange , but when we look at the stars , we are seeing the last of them . If the star is far , far right, she may not even exist over the way we know it today - and even have turned into another celestial body. When we observe a star , we're picking up the light it emitted into space . Light is a form of energy that travels with the incredible speed of about 300,000 kilometers per second . But as the distance between celestial bodies is too large, it may take a long time for the star's light to reach us .

The nearest star to us after the Sun, called Proxima Centauri , is at a distance of 40 trillion miles from Earth . This means that the light from this star takes about 4.2 years or 4.2 light years to get here . So when we see this star , we're seeing at that time, she gave birth to 4.2 years. If , at this time , that star she just ceased to exist " would be quenched " , let your light to reach us , here at 4.2 years. Only then we would realize that it no longer exists.

The brightness of the stars during the day is dazzled by the sunlight that is the star closest to the Earth. Therefore , we see the stars in the sky only at night , but they remain there during the day .

Color of Stars : Stars exhibit a wide field of colors that reflect the temperature in their atmospheres in accordance with Wien's law. The color of a star is determined by the part of the visible spectrum where most contributes to its full brightness.

The naked eye , it is difficult to distinguish the color of the stars . Because of the great distances they are from us , the amount of light that reaches our eyes is very small and not perceive colors in low light.

The color of the star depends on the heat reaches the surface of the core them and has therefore related to its temperature. The hottest stars with surface feature white or bluish color , reddish in color and those are the ones that have less hot surface. With the telescope you can see the color of the stars more clearly.

The sun has a yellowish color, compared to the other star , has an average temperature.

*Unit of Temperature Is Celsius

About The Picture : The blue represents the hot interstellar gas, the stars are green color and red hot dust. The super red giant stars are the stars of greater brilliance to the center.

Spectral Types of Stars : The spectrum of a star is the decomposition of their light at different wavelengths (λ) or frequencies (v ) . The stellar spectra differ from each other , allowing us to classify them according to their most important characteristics . Classes or spectral types are based on absorption lines we find in each spectrum . Some stars have strong spectral lines associated with the element hydrogen (classes A,F) . Other lines have weak hydrogen but strong lines of calcium and magnesium (G,K). After years of cataloging stars , was 7 basic classes : O,B,A,F,G,K,M. Note that the spectral classes correlate strongly with temperature ; type O stars are hot , the M-type are cold .

The classes were further subdivided into 10 subclasses , numbered from 0 to 9 . For example , our Sun is a G2 star . Sirius, a hot blue-white star, type B3 .

Why do some stars have hydrogen lines , others strong lines of calcium ? The answer lies not in its composition ( all stars contain around 70% of its mass in the form of hydrogen ) , but in its temperature .

As the temperature increases , the electrons of an atom have more energy , becoming less attached to their nuclei . The energy acquired comes from the interaction of the electrons of the atoms with the light (which results in the absorption lines ) or collisions between atoms .

If the collision is strong enough, an electron can be stripped from the atom, a process we call ionization. The ionized atom is said and is called ion. An atom can be ionized absorb a photon. This, indeed, is the most efficient mechanism of ionization in stellar interiors. By losing all or many of its electrons, an atom stops interact with light and thus produce absorption lines. Stars whose interior temperatures will have more ions are larger and therefore fewer rows. The temperature at which the atoms of an element largely depends ionize the element, which means that for each temperature, let us only lines produced by certain features, thus providing a typical spectral signature that temperature .

Despite the large domain of luminosities, temperatures, sizes and spectral classes of stars, there is a physical parameter that is most important: the mass. Warm, bright and big stars (spectral classes O and B) are generally of high mass. Cooler stars are mostly small, low-luminosity and mass. This dependence of the properties of a star with its mass is basically what sets the Russell-Vogt Theorem.

Why the Stars Twinkle?

Looking at the night sky, we can see that the brightness of the stars change: they "blink". But stars are always emitting the same light. The flash is caused by changes in air from the atmosphere that the light passes through.

Next in Note l'll start talking about constellations !

Must a star always emit light in the visible spectrum? I know that it also emits other rays such as x-rays and infrared rays but I'm just wondering :) .

U are right. u know what the stars near centers of huge galaxies are very huge and hot and fast. Their study is possible only through specialised telescopes.

I really like the pictures... ^^ So colourful. Great note!!

Under Color of Stars, first word is typo :)

I enjoyed this note, keep up the work!

Yep , I Had Written In Portuguese !

How is it that the colour of the star depends on the temperature? Very informative note by the way :-) looking forward for constellations!

There are several factors to that actually but majority of it is temperature, like the star's composition and things like the Doppler effect. There is something called Wien's law. This essentially states how peak wavelength outputted from a star will be inversely proportional to the temperature of the star. I don't wanna go into this too much, so I made it short. Hope this was satisfying (x'D Probably not). ^^

I gained knowledge from this. Thank you

You know when a star dies it forms a supernova but what happens after it? Does it happen to be there forever?

how relation between tempreture and color of star is determined ?